BreakPoint: A Dinosaur Named Sue - Breakpoint
How can we respond to those around us with truth and love? Give today to receive this month's featured resource.
Skip to content 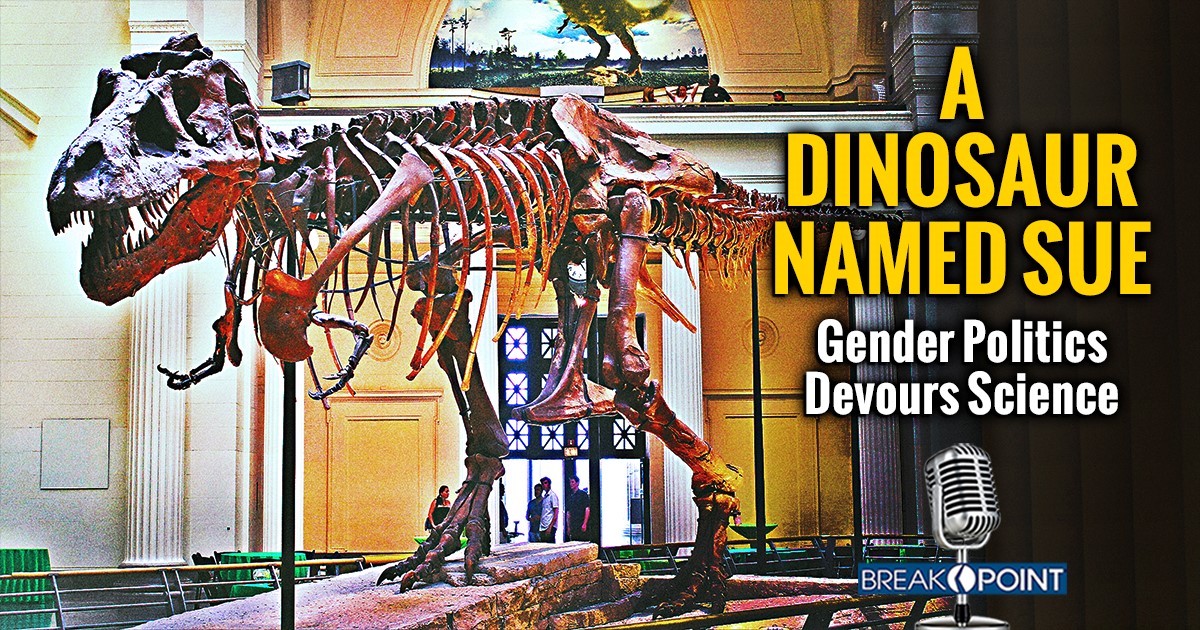 Every Johnny Cash fan remembers that song, “A Boy Named Sue,” about a young man’s quest to find his dead-beat dad and punch his lights out for giving him a girl’s name. Well, in a completely unrelated factoid, “Sue” is also the name of the Chicago Field Museum’s famous Tyrannosaurus rex skeleton, one of the largest ever unearthed. This tyrant lizard queen is named after discoverer, Sue Hendrickson, who spotted the massive meat-eater’s bones sticking out of a hillside in South Dakota back in 1990. Since then, most paleontologists have concluded that Sue the T. rex was indeed a female. Even though all we have are bones, the theory goes that theropod dinosaurs, like many animals today, were sexually dimorphic, with females being larger than males. Whether dinosaur Sue was male or female, she might have taken Cash’s advice and punched out whoever put up her new exhibit—if her arms could reach them. In accordance with a Twitter announcement back in 2016, signs around the T. rex skeleton now inform museum visitors that Sue prefers to be referred to as “they/them/their,” rather than “he” or “she.” I wish I could tell you I’m making this up. In an interview with online LGBT magazine “Them,” the Field Museum’s public relations manager said that docents will now be trained to answer questions about Sue using gender-neutral pronouns. “Science is for everyone,” she said. “If this makes one person more comfortable in our museum, if it helps people get more accustomed to using they and them pronouns, then it’s worth it.” Sue’s discoverer and namesake, Sue Hendrickson, wasn’t nearly as excited about her fossil’s coming-out. This dinosaur, she said, “never worried about the proper nomenclature for various descriptions of sexual preferences.” Increasingly today, some human beings seem to worry about nothing else. Writing in the Washington Post a few days ago, two scientists from the University of California, Berkeley, warned that using gendered language to refer to animals like frogs can “fuel bigotry.” “Biologists,” they complained, “too often employ imprecise terminology when describing the biology behind changes in sex, like those seen in amphibians.” Terms like “feminize” and “demasculinize,” they argue, “embolden homophobic groups” and give them language with which to attack “trans and queer people’s rights...” I don’t know about homophobic groups, but I can tell you our BreakPoint editorial team was emboldened to scratch their heads and chuckle loudly at this ridiculous article, as well as at a major museum giving serious thought to the gender identity of an extinct carnivorous reptile. Lost, of course, in all of this is anything recognizable as science. As several critics have pointed out, Sue was a real animal, not a persona the Field Museum created on Twitter. And as a real animal, it was either male or female. Any talk about a T. rex being “gender-nonbinary” is a fantasy—one that has no place in a museum. And the same is true of people, whether or not they are referred to by gender-neutral pronouns. Excluding the rare disorder of intersex genitalia, every human being is born objectively male or female. Unlike some animals which science tells us can switch back and forth (a list that doesn’t include dinosaurs, by the way), we are fixed at birth. No amount of Twitter activism, flag-waving, parading, or museum signage will ever change that. In our own bodies, just as in the ground of South Dakota, we encounter realities that are not subject to our feelings, preferences, or chosen identities. We don’t create those realities, and we’re not in charge of them, not even if we conscript the king—excuse me, the queen—of dinosaurs for our cause. Our ideas about reality, including ourselves, will always have consequences. If those ideas are bad, they will have victims.     Download mp3 audio here.