A Failure of Faith Formation - Breakpoint
How can we respond to those around us with truth and love? Give today to receive this month's featured resource.
Skip to content 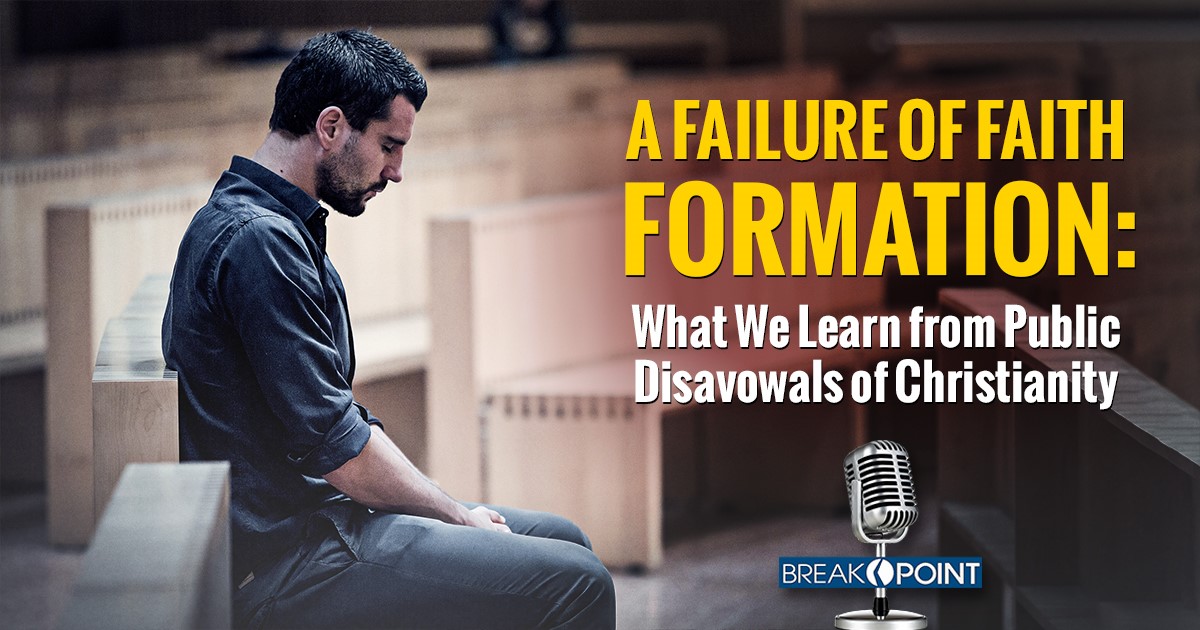 
A Failure of Faith Formation

Last week, following the high profile falling away from faith of Joshua Harris, former Hillsong singer and songwriter Marty Sampson posted this on Instagram: “Time for some real talk…I’m genuinely losing my faith…and it doesn’t bother me.”

The next day he deleted this post and clarified that he hasn’t fully renounced Christianity, at least not yet. Still, he admitted, his faith was quite shaky. He then reiterated his doubts and said that “the majority of a typical Christian’s life is not spent considering these things” because they fall into the “too hard basket.”

Sampson’s claims, I’m sad to say, are not uncommon among young evangelicals. And let me just say this as directly and bluntly as I can: they reveal a failure on the part of the church to take the difficult but essential task of faith formation seriously enough.

As I read through his description of what was happening, I thought to myself, “Which faith is he falling away from?” His words reveal a lot.

First, he described a faith largely driven by emotions. Losing his faith, he said, did not bother him. In fact, he’s happy about it. So, if his doubts bothered him and his faith instead made him happy, would he then reconsider?

The fact is, too many churches sell Christianity with feelings. We’re told how interested God is in our own happiness, our own meaning, and our own sense of purpose. But our feelings cannot determine whether or not something is actually true.

Second, the faith Sampson describes is an uncritical faith. Science, he says, “keeps piercing the truth of every religion.” I’m not completely sure what that even means, but it seems to buy into the classic science vs. faith narrative. It’s just not true that science is ultimately opposed to faith. It’s not true historically, nor is it true today. Faith doesn’t need to reject critical investigation.

Third, Sampson describes an uneducated faith. He claimed that “no one talks about” the seeming contradictions in the Bible, the fact that Christian leaders fall, or how a loving God can condemn “four billion people to a place, all ‘coz they don’t believe.” This of course is just not true. Every apologetics book ever written tackles these questions, and the issues he raised here aren’t even the difficult ones.

Still, while Sampson is mistaken that “nobody” is talking about these issues, he’s not completely wrong in his critique. In fact, far too many churches avoid tough questions. Far too many fail to equip Christians on the current cultural controversies. In fact, too much of Christianity – especially evangelical Christianity – neglects intellectual discipleship altogether. Not even basic theology is articulated from some pulpits. I don’t know how else to say it: They fail God’s people.

Fourth, Sampson also wrote that “Lots of things help people change their lives, not just one version of truth.” This statement reveals a misguided faith, one that smacks of what sociologist Christian Smith called “Moralistic Therapeutic Deism,” that the point of religion and faith is self-improvement. That’s not what Christian faith is about. Christian faith is discovering the truth about who God is and what He is doing in the world, and then through repentance and His grace, aligning ourselves to that truth.

Now look, I have no problem with Sampson admitting doubt. Most of us, at some point in our journey of faith, will encounter doubt about God’s love, about Scripture, about whether Jesus is really God, any number of things. In fact, I discussed doubt with apologist Brett Kunkle recently on the BreakPoint Podcast.

But Marty Sampson was a worship leader. He wrote modern Christian melodic catechism. He was tasked, as worship leaders are, with communicating theology to the body of Christ. Apparently, he was in a church where no one was talking about the questions he struggled with. The church failed him.

In his book “The Fabric of Faithfulness,” Steve Garber wrote that the reason so many young Christians lose their faith is that their worldview isn’t “big enough” for the world. This is a depressingly accurate description of what we can expect from a generation whose intellectual faith formation has been neglected.