BreakPoint: All the Cool Girls Are Transitioning
Skip to content 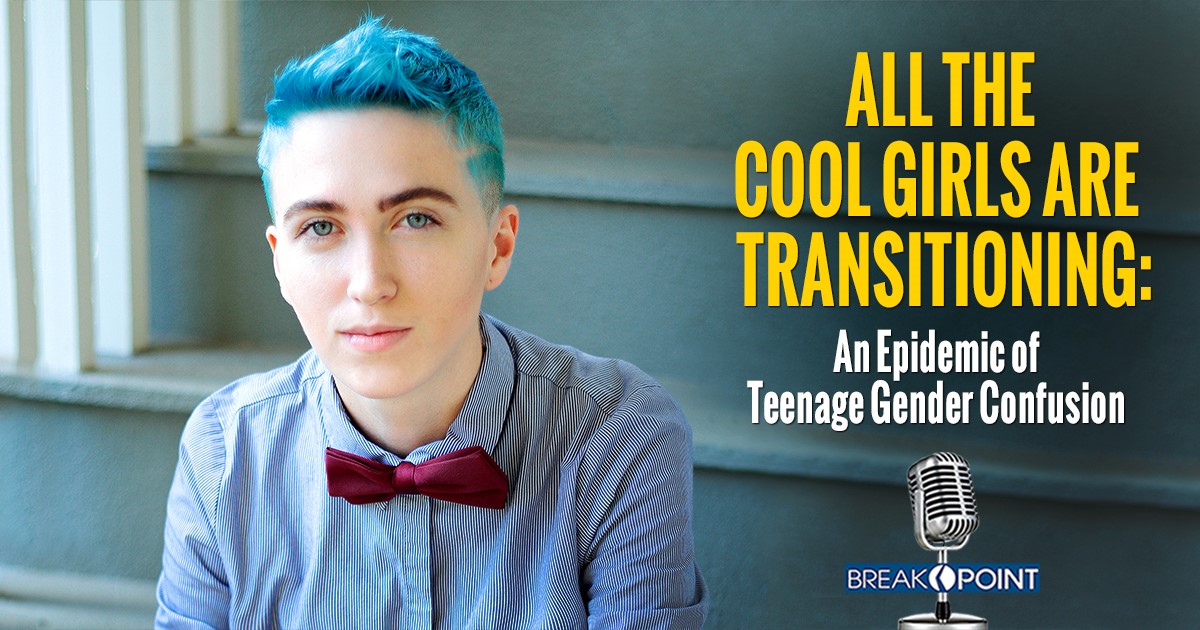 
All the Cool Girls Are Transitioning

As 2018 draws to a close, we are re-airing three of the most important BreakPoint commentaries of the year. Today it’s a commentary entitled “All the Cool Girls Are Transitioning.”

We’ve all seen teenagers—especially girls—adopt new fashions en masse. Their friends are doing it, so they do too. It’s true of music, clothes, those ridiculous, furry Ugg boots… But lately, fashion-conscious teens are changing much more than their clothes.

The Economist recently reported a flood of adolescent girls seeking treatment for gender dysphoria over the last eight years. In 2009, less than half—41  percent—of teens walking through the doors of gender clinics in the U.K. were female. But by 2017, that number jumped to almost 70 percent.

Now, if gender dysphoria—feeling yourself to be the opposite gender from your biological sex—were actually something innate to the human condition as trans activists claim, we’d expect these numbers to remain consistent and roughly balanced between boys and girls. But they’re not. According to Dr. Lisa Littman, who teaches behavioral and social sciences at Brown University, transgender identity, like Ugg boots, has become a trend.

According to Littman, droves of adolescents, with no prior history of gender confusion, are suddenly announcing they’re transgender after “immersing themselves in niche websites,” or “after similar announcements from friends.”

Littman surveyed 256 parents of children who experienced what she terms “rapid-onset gender dysphoria.” The results were astonishing: 87 percent of teenagers who suddenly came out as transgender did so after spending a great deal more time than usual online or after “cluster outbreaks” of gender dysphoria among their friends.

To put it simply, these kids wanted to transition because “everyone’s doing it.”

Littman describes viral gender confusion as a “social and peer contagion.” In some teenage circles, particularly among girls, it’s reaching epidemic proportions. In a third of the peer groups she researched, half or more of the individuals involved came out as transgender. To put this in perspective, less than one percent of Americans aged 18-24 identify as trans.

In fact, gender-transition is not only fashionable, “Most children,” says the Economist, “who came out became more popular as a result.”

Littman believes adolescents are embracing the idea they are the opposite gender as a coping mechanism for unrelated issues. And the numbers back this claim up. Almost two-thirds of those Littman studied had previously been diagnosed with other psychiatric or developmental disorders, and nearly half had experienced trauma or tried to harm themselves—all before expressing any gender dysphoric feelings.

Unsurprisingly, Littman’s research has come under fire. Transgender activists are comparing her sources to—yes, wait for it—the KKK. This despite the fact that 88 percent of parents Littman surveyed believe that transgender people deserve equal rights. Caving to pressure, Brown University removed the press release about her research from its website, claiming it requires “further expert assessment.”

Even so, the idea that teenagers are willing to try on transgender identities like trendy shoes is well-supported. Study after study shows that the vast majority of gender dysphoric minors will eventually change their minds and, if left alone, will not continue to identify as transgender into adulthood.

But to a hammer, everything looks like a nail. And transgender ideology today will gladly sacrifice a teen’s true health on the altar of life-altering decisions like hormone therapy and even gender reassignment surgery.

We must support our own teens in understanding who they are. They must know that their identity lies not in the latest mixed-up gender ideology or in keeping up with their friends’ fashion choices, but only in the God Who created us male and female.