Breaking Up with Purity Culture? - Breakpoint
What makes the Church essential? Click here to learn more.
Skip to content 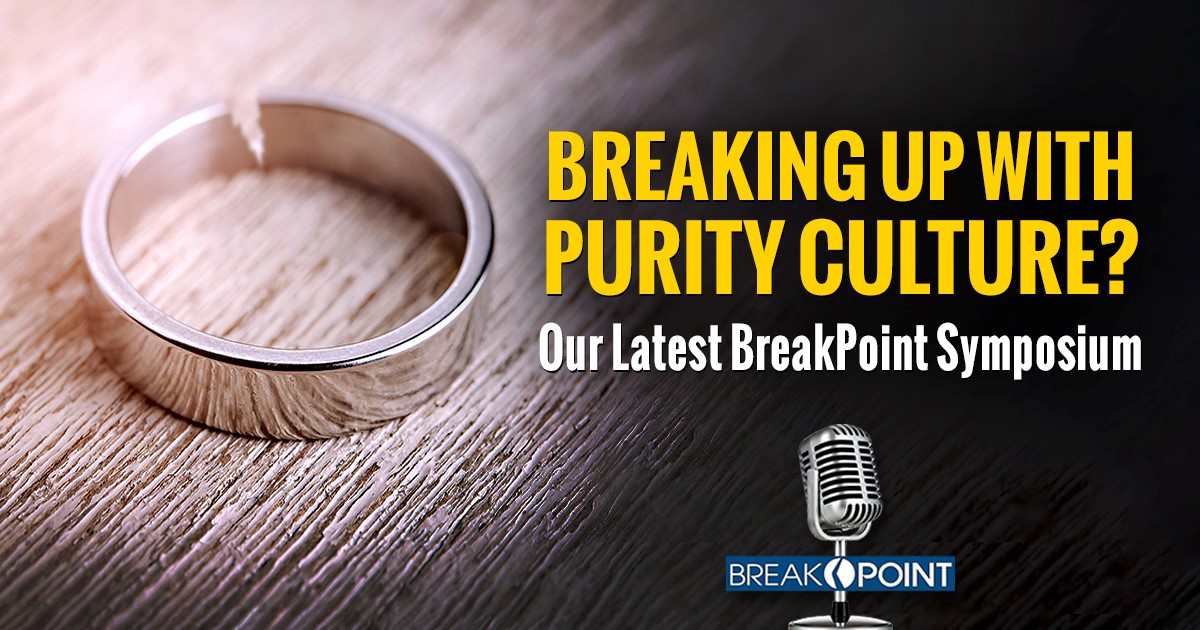 
Breaking Up with Purity Culture?

Here’s a prediction: Thousands of years from now when archaeologists excavate American churches, they’ll identify the 1990s era by “What Would Jesus Do?” bracelets, DC Talk CDs, and purity rings.

Today, 20 years later, that last artifact is even more controversial than when DC Talk evolved from rap music to a kind-of grunge. Purity rings are part of something now derogatorily called “purity culture.”

Here’s some background. What most people mean by “purity culture” is the emphasis from pulpits, youth groups, conferences, and Christian authors, since the ’90s especially, on maintaining sexual integrity. It started as an evangelical reaction within a culture in which sexual freedom had become the highest good. Remember, television in the ‘80s was dominated by family dramas: Full House, Family Ties, the Cosby Show. The ‘90s was the decade of Friends and Seinfeld. That’s quite a shift. Add in more risqué teen movies, music that would make even Madonna blush, and the emergence of internet pornography, and suddenly teenagers were being catechized in casual sex on a whole new level.

In reaction, many Christian efforts to counter this indoctrination and teach the biblical view of sex were well-intentioned but weren’t always consistent or even helpful.

I often identify three “wrong-but-well-intentioned” approaches: First, the fear approach.  Some, especially at the height of the AIDS crisis, responded to the sexual revolution with a scare tactic: “If you have sex before you’re married, you’ll get pregnant, maybe get an STD, and die.”

The 1990s “purity culture” developed a more positive attitude about sex. I call this the “Rally Approach” stage. Christian musicians wrote songs with lyrics like, “Wait for me, darling.” Youth pastors urged students to take “virginity pledges,” and often tens of thousands of Christian teenagers would do so at large, stadium-events.

Of course, there are a lot of positives about letting students know they aren’t alone in their commitment to be pure. But, motivation to start a commitment is a lot easier to manufacture than motivation to keep a commitment. And, the statistics on that era bear out that truth.

More recently, well-meaning parents and mentors have been tempted by what a friend of mine calls “the princess theology” approach. Christian young people are offered sexual purity as a kind of bargain: “If I save myself for marriage, God will send me my dream husband or dream wife.” That also led some to the impression that if they messed up, they’re now “damaged goods,” and no one would want to marry them. There’s no shortage of articles and books today from Christian and secular writers blaming “purity culture” for false expectations, dashed hopes, and ongoing trauma.

Some of this blame is deserved, in my view. The promise of Prince Charming or Princess Charming is one the Bible never makes, and a promise human nature could never accommodate.

So, what should we make of all of this? We asked a wide range of Christian thinkers to comment on “purity culture,” to discuss whether criticisms of this movement are legitimate, and if they are, how Christians should change the way we advance a biblical sexual ethic in today’s culture.

Today, in our online symposium at BreakPoint.org, Jim Daly, Karen Swallow Prior, Sean McDowell, Frederica Mathewes-Green, and many others offer thoughtful responses that get to the heart of what “purity culture” was all about, what went wrong, and what went right. Most importantly, they offer ways the church can keep from compromising its millennia-old witness on God’s design for sex. It’s a witness we must make today more than ever—even if we do decide to toss out the purity rings.

Check out this online symposium at BreakPoint.org.