CRISPR and Faux Outrage - Breakpoint
Help make a bigger worldview possible for Christians around the globe with a year-end gift!
Skip to content 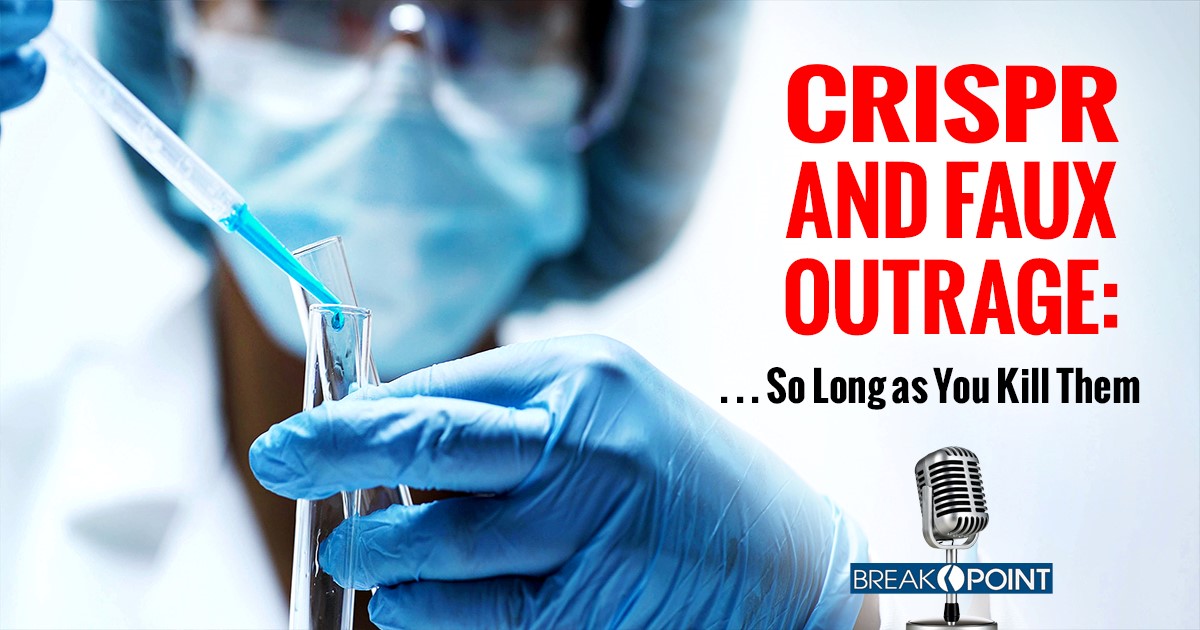 Last autumn, a Chinese scientist named Dr. He ignited a rhetorical firestorm when he announced he’d used the technology CRISPR to genetically alter human embryos, which were implanted and brought to birth.

The announcement was quickly followed by hand-wringing, outrage and condemnation from scientists around the world, including the same ones in the United Stated who had created CRISPR in the first place, not to mention let it loose into world with little more ethical guidance than “now, play nice.”

Since then, the only people who seem to have responded with any seriousness to He’s transgression is his now-former employer, the Southern University of Science and Technology in China.

Meanwhile, in the U.S., some scientists are following Dr. He’s footsteps, though maybe with a bit more caution.

According to a recent report on National Public Radio, “A scientist in New York is conducting experiments designed to modify DNA in human embryos as a step toward someday preventing inherited diseases.”

The report was about Columbia University developmental biologist Dieter Egli, who’s stated goal is “to determine whether CRISPR can safely repair mutations in human embryos to prevent genetic diseases from being passed down for generations.”

Specifically, Egli is using CRISPR to try and repair a genetic defect that causes blindness. If successful, this could prevent people with the mutant gene from passing it on to their children, and would potentially lead to other breakthroughs, such as the ability to “edit embryonic human DNA to prevent many inheritable diseases, like as Tay-Sachs disease, cystic fibrosis, or Huntington’s disease.”

Given the promise of alleviating the level of suffering these diseases cause, it’s difficult to fault Egli’s motives. But then again, the same could be said of Dr. He. His goal, as he said, was to prevent the children of HIV-positive parents from inheriting their parents’ condition.

So, given that we really can’t distinguish between the motives of the two projects, why was Dr. He vilified by the entire scientific world while Dr. Egli is not? Why did Dr. He lose his job, while Dr. Egli is enjoying puff-piece interviews by NPR?

The difference is this: Egli is killing the embryos he modifies.

Of course, NPR didn’t exactly put it like that. Instead, they told their listeners that, “So far, Egli has stopped any modified embryos from developing beyond one day so he can study them.” In Egli’s words, “Right now we are not trying to make babies. None of these cells will go into the womb of a person.”

I hope you caught that rhetorical sleight of hand. Though he denies it, Egli has already made “babies.” He can call it a “cell” if he wants, but an embryo is not a cell, certainly not in the same sense as hair cells or even stem cells.

Like Dr. He, Dr. Egli is experimenting on human persons: embryos.

Obviously, he doesn’t see it this way, and apparently neither did the reporter, hence the euphemism “stopped any modified embryos from developing.” Unless he’s frozen the embryos, the more accurate word for stopping a living being from developing is “killing.”

Let’s walk through the moral absurdity at work here: Both Dr. He and Dr. Egli “manufactured” embryos in a lab for the express purpose of experimenting on them. The Chinese scientist allowed them to develop and be born. This makes him a villain to the larger scientific world.

Egli manufactured embryos and experimented on them, but discarded them as medical waste. That makes it okay?

This is all just further proof that the pearl-clutching and caterwauling that followed the news about Dr. He was a farce. Not that he’s absolved of what he did: It was reckless and troubling and turned another human being into a research subject without consent. But to paraphrase our Lord, let those scientists without sin cast the first stone.

To hear more about this story, listen to the most recent episode of the BreakPoint Podcast, when Dr. Ben Mitchell, a bioethicist at Union University joins me to talk about CRISPR and our culture’s struggle with what it means to be human.