Dragging the Kids into It - BreakPoint
Learn how to make abortion unthinkable by giving your gift of any amount today!
Skip to content 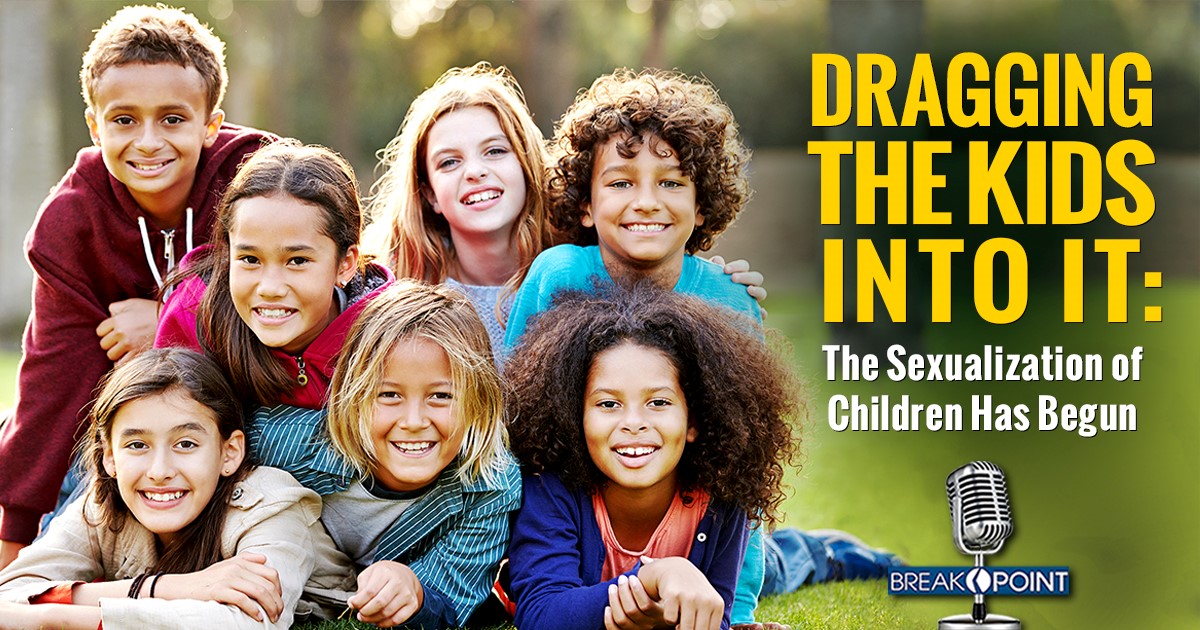 
Dragging the Kids into It

In the whole run-up surrounding the push for same-sex marriage and LGBT “rights,” some predicted that the normalization of homosexuality would open the door to other deviant practices. Usually at the top of the list of things being warned against was pedophilia. But we were told over and over that this was offensive, and just an invalid “slippery slope” argument.

Well, it’s been just four years since so-called same-sex marriage was instituted by the Supreme Court, and it’s now clear that the slope was a lot more slippery than ever advertised.

Consider, for example, the growing, nationwide trend of “drag queen story hours” at public libraries. To be clear, these events are exactly what they sound like. Confused men, dressed in flamboyant makeup and women’s clothing, reading often propagandistic story books to young children. Last weekend, Lansdale Public Library outside of Philadelphia hosted such an event, where a drag queen who goes by the stage name “Annie Christ”—I’m not kidding—read to dozens of elementary school-aged children while in full costume.

This has become an annual event in Lansdale, usually featuring performers who appear at gay night clubs, but drawing fewer and fewer protests from shocked parents and pastors in the community.

Later this month, a Greenville, South Carolina public library plans to hold its own drag queen story hour, and similar events have taken place in Houston, Detroit, and even here in Colorado Springs. The American Library Association gives its full approval, claiming that such events foster “a more equitable, diverse, and inclusive society.”

Now let me be clear, drag queen story hour is not the worst news of children being sexualized in our culture. Last month, Huck Magazine featured a 10-year-old Canadian boy named Nemis, who is one of the first so-called “child drag queens.” For the article, this young boy was photographed in full makeup and a dress alongside and touching a nearly naked man in high heels.

Nemis’ mother is not only fine with the photo, she promotes her son’s hyper-sexualization, insisting that he’s just having fun.

A few months earlier, in December, another boy, an 11-year-old named Desmond, reportedly performed a suggestive dance at a New York City-based gay bar while adult men in the audience threw dollar bills at him.

As one of my colleagues with a background in law pointed out, it’s hard to see how the boy’s parents and everyone at the bar aren’t being charged with contributing to the delinquency of a minor. New York’s newly-elected attorney general, Letitia James, should do exactly that. Every single adult involved in these stories should be prosecuted.

The very fact that no one is in jail yet is proof of just how slippery that slope I talked about earlier really was. But it wasn’t the “L,” the “G,” or the “B” that really greased the skids. It was the “T.” Normalizing the gender dysphoria of little boys and girls, and by that I mean imposing our radical new experimental ideas about sex and gender on children who have no say in the matter, has proven to be the means for sexualizing them. “They’re just expressing themselves,” we’re told, ignoring the fact that children have no business participating in any kind of sexual expression, least of all for the entertainment of adults.

The fact that I’m here in front of this microphone, telling you about this now on BreakPoint is a little bit disorienting. Thinking about it all as a father is a lot nauseating.  But how we got here is not complicated. Sexualizing children’s identity makes sexualizing their behavior inevitable.

So, what now? What does it mean to live in a culture where sexual displays for and by children are being accepted?

First, we should refuse to accept it—we should refuse to adopt both the language and the mindset that sees this as anything other than abuse. We should protest the daylights out of any library that holds a drag queen story hour, and if you’re in law enforcement or criminal justice, treat sexualizing children as the crime it is! Kids must be sexually off-limits. Why do we even have to say this?

Ultimately, we’re witnessing the de-civilizing of our society, a sickening illustration of how bad ideas create victims. No culture wakes up and decides to exploit its children, but the decades-long process of re-defining human beings according to our sexual ideologies rather than their God-designed dignity is what brought us here.

In the decades to come it will likely fall on Christians, as it did in ancient times, to be the ones who protect children, rather than preying on them.