Hong Kong’s Lesson for Beijing and the West - Breakpoint
How can we respond to those around us with truth and love? Give today to receive this month's featured resource.
Skip to content 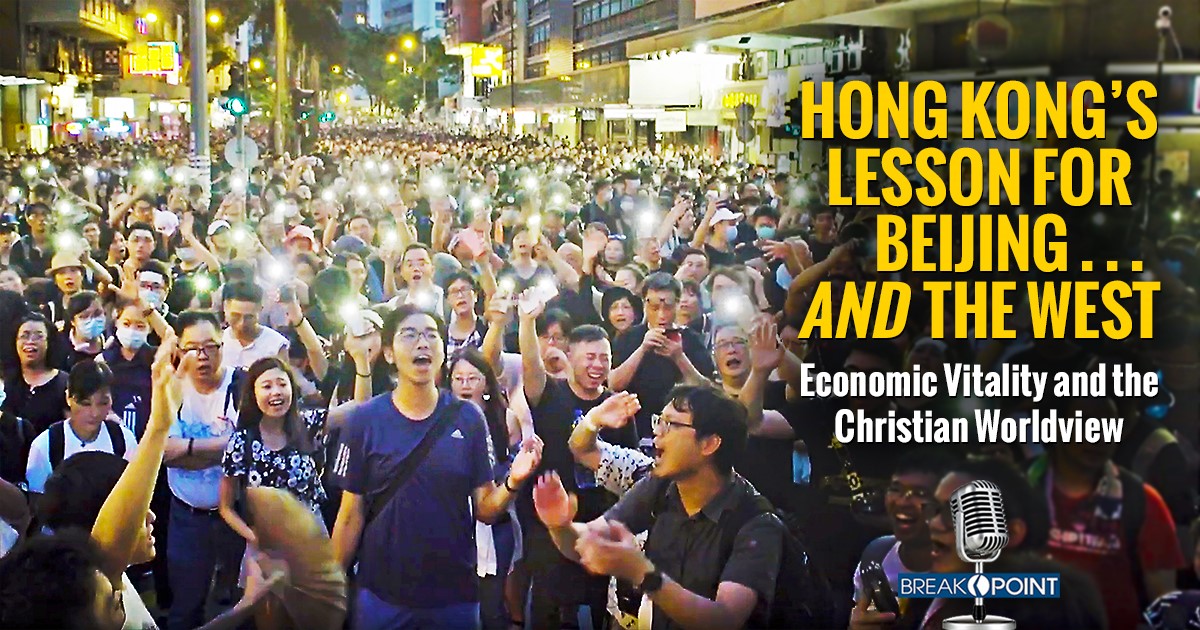 
Hong Kong’s Lesson for Beijing and the West

Last week, the government of Hong Kong finally withdrew a proposed extradition law that sparked mass protests which have rocked the territory and rattled Beijing for weeks.

However, if Hong Kong’s Chief Executive Carrie Lam thought that withdrawing the extradition law would end the protests, she was mistaken. Over the weekend, demonstrators continued to rally, march, and wave the U.S. flag, while chanting “Resist Beijing, Liberate Hong Kong!” and—get this—“Pray for us, U.S., pray for us!”

Their chants highlight not only a Christian dimension in their protests, but the potential impact they believe Christianity can have on the Communist Party’s dictatorial rule, both in Hong Kong and throughout China.

While the protests were initially sparked by the extradition law, it’s clear that deep dissatisfaction with life under Beijing is keeping the flames burning, especially as the Communist Party attempts to strengthen its grip over Hong Kong. One protester told the Los Angeles Times, “The whole system in Hong Kong is rotten, from top to bottom. We want to tear it down and start fresh.”

In the midst of all this, Communist Party leaders know what many of the commentators and so-called experts in the West have long forgotten: That the ideas about justice and freedom that motivate many of the protesters in Hong Kong are rooted in Christianity.

How can we be sure Communist leaders know this? Because of a 2011 study by the state-run Chinese Academy of Social Sciences.

As one Academy member put it, “…we were asked to look into what accounted for the success, in fact, the pre-eminence of the West all over the world.”

After researchers studied everything from a “historical, political, economic, and cultural perspective,” they “realised that the heart of [the West’s] culture is [its] religion: Christianity . . . The Christian moral foundation of social and cultural life was what made possible the emergence of capitalism and then the successful transition to democratic politics.”

That’s quite a conclusion, to which an official of the Academy added, “We don’t have any doubt about this.”

Chuck Colson pointed out eight years ago that the connection between Christianity and the success of the West has created a conundrum for Beijing. As he put it back then, Communist Party officials know that “the industriousness and creativity of the West was born out of the Christian worldview, which sees every individual created in the image of God, desiring freedom, creative in nature, motivated by civic duty and love of neighbor.”

At the same time, China’s actions in Hong Kong and Mainland China reveal that the Communist Party sees all religions, and Christianity in particular, as dangerous rivals. If Jesus is Lord, then Xi Jinping is not.

As Chuck Colson also said, if Beijing “truly opened its doors to Christianity and unleashed the creative and spiritual potential of its people” the result would be even greater prosperity and “growing global and economic clout.” But that prosperity and clout would come “at great cost to the power of the Communist dictatorship.”

And just as Beijing can’t have it both ways, here’s a note for all Western leaders: Neither can we.

As the people of Hong Kong sing their hymns and chant their slogans, they’ve made it clear they are not willing to trade their freedoms and loyalties, especially their religious freedoms and religious loyalties, for what Xi and company are offering.

Before I leave you today, I want to tell you that we have a free webinar on Wednesday September 18th with none other than Os Guinness, about his new book, “Carpe Diem Redeemed.” Register here. You won’t want to miss it.