How to Think About Impeachment - BreakPoint
Skip to content 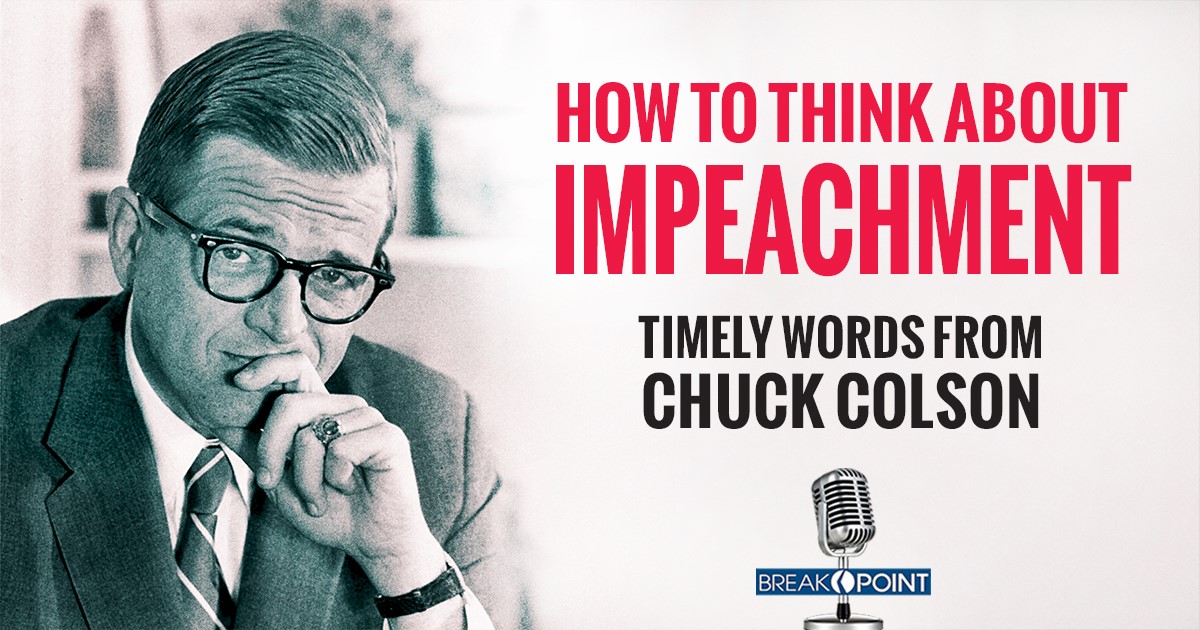 
How to Think About Impeachment

Even before he was sworn into office, President Trump’s political opponents were talking impeachment. Still, nothing so far – not pressure from “the Squad,” not the Mueller Report—has been able to move House Speaker Nancy Pelosi in that direction. That may have changed.

In response to the revelation that President Trump asked the president of Ukraine to investigate Hunter Biden, Pelosi announced she was launching an “impeachment inquiry.” Though even after the release of partial transcripts of the call that was heralded as a “smoking gun” by some and a “nothing burger” by others, it’s still not clear whether this “inquiry” will lead to actual proceedings. Still, we’re a step beyond where we’ve been since the 1990s.

Two sitting U.S. presidents, Andrew Johnson and Bill Clinton, have been impeached. Richard Nixon resigned in order to avoid impeachment. In 1998 and 1999, Chuck Colson brought his up-close, intimate, and personal experience with Watergate to bear, along with his biblical worldview, on the Clinton impeachment proceedings.

Three of Chuck Colson’s observations from those BreakPoint commentaries are, I think, particularly helpful and clarifying for what we’re likely to face now in the coming months.

In one commentary, Chuck noted that many people didn’t understand what impeachment is and how it works. That’s just as true today. Here’s his helpful explanation:

If the House of Representatives passes an impeachment resolution this coming week, it does not mean the president is going to be turned out of office. It simply means that the House has made a finding that there is credible evidence …

The Senate’s job will be to decide how to dispose of the matter: Do nothing, plea bargain, censure, or conduct a trial.

In their wisdom, our Founding Fathers designed a way we could bring to trial the only man in America who cannot be tried in the courts while he sits in office: the president of the United States. They intended no man to be above the law, a concept that reflects a major Christian contribution to the founding of our nation.

The House action will not, I repeat, not, despite what the president’s defenders claim this week, overturn the election results.

In another commentary, Chuck noted a stark and important difference in how the Watergate investigation proceeded and what he was seeing in the Clinton impeachment:

Nearly 25 years ago, I sat in the witness chair facing the House Judiciary Committee during the impeachment hearings of Richard Nixon. It was hardly a happy day for me because I was there to testify under oath about all the transgressions we now know of as Watergate.

I left the hearings that night knowing I was going to prison, despondent because I knew that my friend President Nixon would soon be out of office. But, in a sense, I had a renewed confidence in the American system. Why? Because the congressmen seemed genuinely concerned about upholding the law. Even the Republicans, mostly partisan defenders of Nixon, recognized that the integrity of the presidency was on the line, and what was right had to take precedence over politics. Even though I was on the losing end, I was reassured that the American system was stronger than any man or partisan interest.

Chuck went on to note how those days were over, replaced by a culture in which political leaders were unwilling to put national interest above political ideology, and in which citizens had lost their confidence in the American system. I can only imagine what he’d think now. My guess is that he’d add a loss of civic knowledge and a lack of public virtue to his analysis.

Still, in Chuck’s final analysis, after the Senate (wrongly, in his view) acquitted President Clinton, he reminded us that all the events of the cultural moment must be understood in light of something bigger, unchanging, and ultimately sure:

And for all of us who are Christians, regardless of how we view this process, let us remind ourselves that we serve a God who rules over the affairs of men—whether they know it or not.