BreakPoint: Indian Christians on Edge - Breakpoint
How can we respond to those around us with truth and love? Give today to receive this month's featured resource.
Skip to content 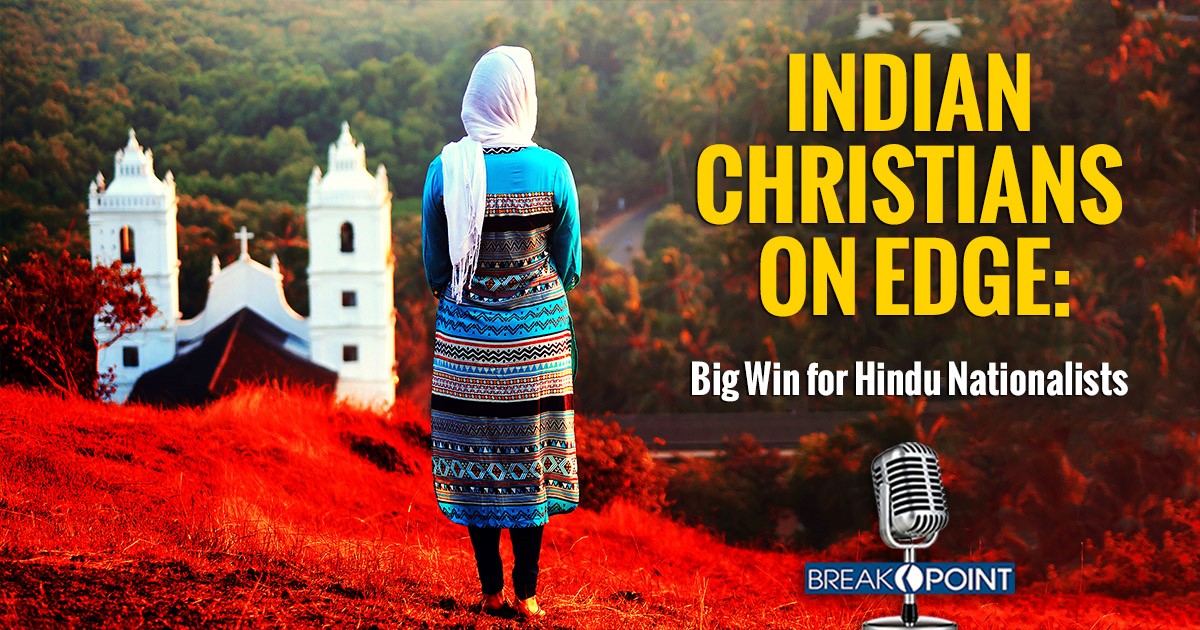 Two weeks ago, Narendra Modi was sworn in for a second term as India’s Prime Minister. His party, the BJP, won a resounding victory in parliamentary elections. As Indian pundits – a word that is, by the way, of Indian origin – will tell you, if Modi and the BJP were the obvious winners, their political rivals, the Congress Party, were the big losers. But there’s another potential loser in these elections, one that should especially concern American Christians, and that’s Indian Christians. To understand why, you need to understand Hindutva, which is the BJP’s governing ideology. It literally means “Hinduness,” and defines what it means to be an Indian in religious—to be specific, Hindu—terms. Hindutva regards Christianity and Islam as foreign religions, and therefore any Indian who claims to be a Christian or a Muslim is less than truly Indian. According to this ideology, Hinduism is central to what it means to be an Indian. While most of the world mistakenly sees India as a land of Gandhi, gurus, and nonviolence, there’s nothing peaceful or tolerant about Hindutva. For instance, the man who assassinated Gandhi was an adherent of Hindutva who felt Gandhi had betrayed the Hindu community. In the run-up to the election, one BJP candidate called Gandhi’s assassin “a patriot.” Though Modi denounced the comments, they are consistent with the principles of Hindutva. More concerning are the many examples of Hindutva-inspired persecution of Christians in India, especially in the five years since the BJP first came to power. In the weeks before the election, there were reports of “food deprivation, beatings, and jail” directed at Christian converts in the eastern Indian state of Jharkhand. As Open Doors put it, “because radical Hindu nationalists view followers of Jesus as alien to the nation, all Christians in India are suffering persecution. Driven by a desire to cleanse their country from Islam and Christianity, nationalists do not shy away from using extensive violence to achieve their goals.” Part of their campaign to cleanse India of Christians involves anti-conversion laws. At least six Indian states effectively prohibit conversions to Christianity. I say “effectively,” because Hindu nationalists there have found a way around the freedom of religion guaranteed in the Indian constitution. Any conversion that results from “force, allurement or fraudulent means” is illegal. Given the vagueness of these terms, Indian law empowers ideologically-driven local officials to view all conversions as guilty until proven innocent. For all these reasons and more, India currently ranks tenth on Open Doors World Watch List—which is eleven spots higher than when the BJP first assumed power. All of this may come as a surprise given what we often hear or read about India in mainstream media outlets. For example, a recent discussion of the Indian election on a New York Times podcast explained the threat to Indian Muslims, but made no mention of the persecution of Indian Christians. To be fair, India does have the second-largest Muslim population in the world, and the most visible religious conflict there falls along Hindu-Muslim lines. Still, there are more than 30 million Christians in India, and there’s some reason to believe that this number may be significantly understated. Muslims aren’t the only targets of Hindu extremism. Indian Christians are rightly concerned about what Modi’s triumph means for them. We should be concerned as well. After all, contrary to Hindutva ideology, Christianity is no European import. It existed in India before Paul reached Rome. Some churches in southern India even worship in an offshoot of Aramaic, the language Jesus spoke. We must pray for our Indian brethren, asking God to preserve the faith in a subcontinent where it is every bit as native as that which seeks to drive it out.     Download mp3 audio here.