BreakPoint: Joaquin Phoenix and ‘The Gospel of Mary’ - BreakPoint
Skip to content 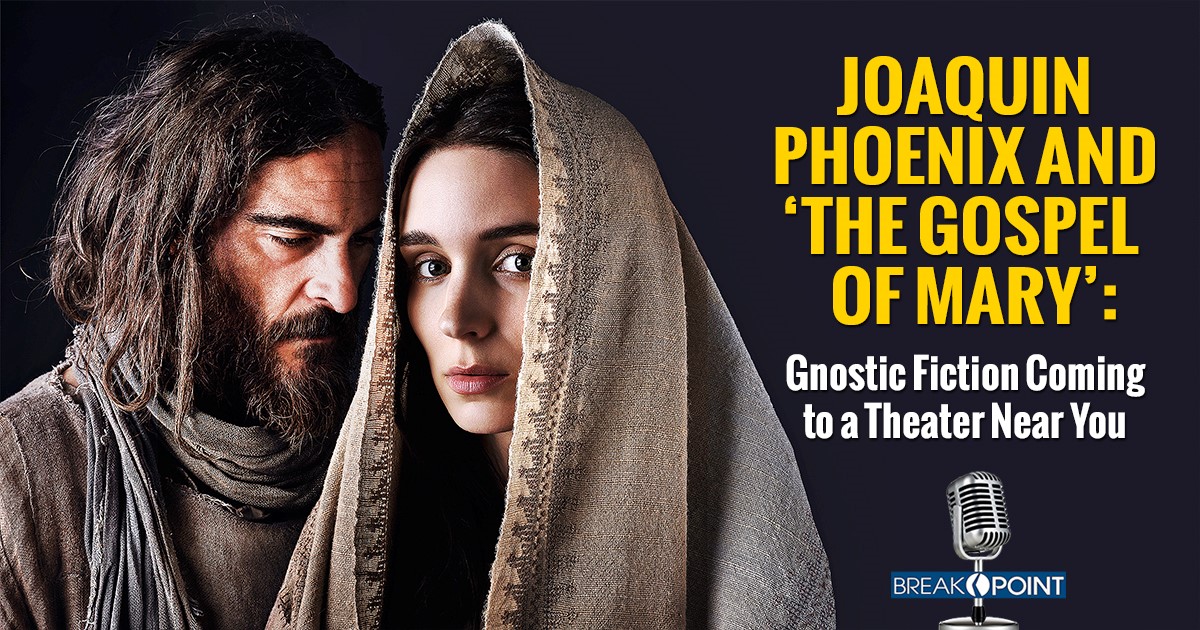 
BreakPoint: Joaquin Phoenix and ‘The Gospel of Mary’

Remember that 1980’s cough syrup commercial when Chris Robinson said, “I’m not a doctor, but I play one on TV”? I wanted to paraphrase these immortal words when I read what actor Joaquin Phoenix of “Gladiator” fame said about his role as Jesus in the upcoming movie, “Mary Magdalene.” Phoenix is not the Son of Man, but he plays him on the big screen. His is a very different Jesus than the one we meet in Matthew, Mark, Luke, and John. Judging by the trailer and the press roll-out, the movie will draw heavily on a second-century Gnostic text known as “the Gospel of Mary.” In a recent interview with Newsweek, Phoenix slammed early Christianity for not canonizing this and other apocryphal writings about Jesus, saying: “Why was Mary’s book not included in the Bible? The stench of blatant sexism,” he says, is “inescapable.” Phoenix went even further in another interview: “Somebody made that decision to exclude [Mary Magdalene’s] observations and feelings about the life of Christ and her experience. There seems to have been an overt intention to exclude women from that process.” The truth is, no one excluded Mary Magdalene’s experiences. Scholars universally agree that she didn’t write this so-called gospel. Along with other texts like “the Apocryphon of John,” and “the Sophia of Jesus Christ,” “the Gospel of Mary” was never recognized by the Church as part of the New Testament. The reason is that it is an obvious forgery. The Gospel of Mary is a work of fan-fiction by members of a false religion who attempted to co-opt Jesus for their own purposes. True to the pattern of other Gnostic texts, the “Gospel of Mary” claims that Jesus delivered a private revelation to its namesake that radically contradicts the canonical gospels. Even more, the Mary Magdalene revealed in the Bible is the best response we have to the accusation that early Christianity was sexist. Recall that she is reported as the first witness of the risen Lord—a claim that would have scandalized first-century Jewish readers. In that culture, the testimony of a woman was considered worthless, yet she and several other women were entrusted to take the message of Christ’s resurrection back to His disciples, and those disciples were hesitant to believe them. If the four gospels were written to make Jesus’ male followers look good at the expense of the women, they did a lousy job. Authors like Alvin J. Schmidt and Rodney Stark have documented that Christianity—far from oppressing women—radically elevated their status in the ancient world. It’s hard for us in 2019 to grasp just how revolutionary the Apostle Paul’s words were that “there is neither Jew nor Greek, there is neither slave nor free, there is no male and female, for you are all one in Christ Jesus.” And speaking of important background material, Joaquin Phoenix grew up in a pseudo-Christian cult that seems to have soured him toward religion. While we should be sensitive to that experience, we have to admit he’s no expert.  Even so, his unfounded statements and the false story this movie tells will strike many as convincing, in the same way Dan Brown’s “The Da Vinci Code” did a few years back. The good news is, we live in what I like to call the “golden age of good arguments.” There is a wealth of apologetic resources available that ably debunks the idea that the Gnostic gospels were unfairly suppressed or that they offer any new information about the life of Jesus. We’ll link you to just a few of those resources at BreakPoint.org. The problem isn’t that the answers aren’t available. The problem is that the answers rarely reach as many people as the falsehoods do from the publishing industry, the media, or Hollywood—which, like the Gnostics of old—never tire of producing false Christianities and false Jesuses. Our job is to learn the answers, to engage in conversations, to dialogue about those answers, and to do our best to set the record straight.