BreakPoint: A Memorial to the Victims of Lynching
How can we respond to those around us with truth and love? Give today to receive this month's featured resource.
Skip to content 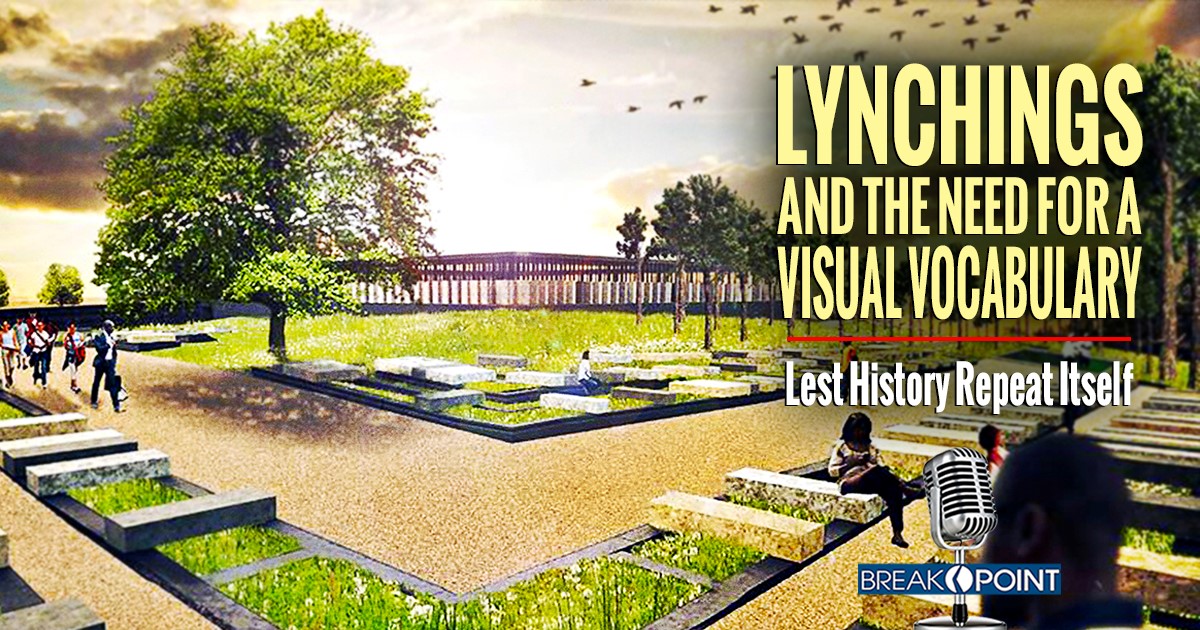 
BreakPoint: Lynchings and the Need for a Visual Vocabulary

A new memorial aims to remind us of a dark, painful chapter of American history. And remember this history we must, because it’s being repeated.

In about 1937, Abel Meeropol, a high school teacher in the Bronx, saw a photograph of two African-American men who had been lynched by a mob in Marion, Indiana.

The photo prompted Meeropol to write a poem entitled “Strange Fruit.” It was set to music, recorded in 1939 by the jazz legend, Billie Holiday.

Here’s how the song opens: “Southern trees bear strange fruit/Blood on the leaves and blood at the root/Black bodies swinging in the southern breeze/Strange fruit hanging from the poplar trees.” Holiday’s song made it almost impossible for America to ignore the reign of terror being visited on Black Americans.

Still, most Americans today lack an adequate knowledge of lynching and its impact on our history.

In late April, the National Memorial for Peace and Justice opened in Montgomery, Alabama, to help us remember. Behind the Memorial is an organization called the Equal Justice Initiative. They’ve documented and memorialized about 4,000 instances of what it calls “racial terror lynching” between 1877 and 1950.

Their work includes images lost to history, but which at the time were often used as postcards and souvenirs—yes, you heard that right. What differentiates terror lynching from mob justice is that the goal of terror lynching had little, if anything, to do with real or imagined transgressions of the law. Instead, the goal was to reinforce racial hierarchy.

Thus, black men were lynched for “bumping up against a white woman or wearing an Army uniform.” Even if no serious crime, or any crime at all, had been committed, the accused could be lynched without trial or proper evidence.

In response, between 1916 and 1970, an estimated six million African Americans headed North in what became known as the “Great Migration.” They were under no illusions about being welcomed in places like Chicago or Detroit, but the alternative was, as Rod Dreher, himself a southerner, has put it, to stay in the South ruled by a kind of American ISIS.

Reading and listening to reports lately on the opening of this Memorial brought several things to my mind. First, and most personal, was a family connection. My wife’s grandfather prosecuted the men who were accused of murdering arguably the most famous victim of lynching, Emmett Till. He lost the case, but not for lack of courage.

The second thing is our need for history, and we must not shy away from the dark chapters of it either. As Eric Metaxas will explain later this week on BreakPoint, a quarter of millennials aren’t sure what the Holocaust is.

And if, as the philosopher George Santayana said, “those who cannot remember the past are condemned to repeat it,” what about those who never learned about the past at all?

Third, we need visuals. As a guest on NPR’s “Fresh Air” put it, the images of lynching now resurfacing give us a “visual vocabulary” to help us process what happened. It’s fitting that a photo inspired the song “Strange Fruit,” which also provides a kind of “visual vocabulary” for us.

Confronting any great evil—past or present—requires such a “visual vocabulary.” There was no shortage of reports about what was being done to European Jews during World War II, but it was the images of liberated camps that brought this evil home.

Today, in a chilling repeat of history, images of abortion are hidden from public view, even though it too is an evil that disproportionately targets African Americans.

Of course, memorials like this new one, educating America on the history of lynching, are only created after a great evil has been perpetrated. But the service they provide is essential, lest given our ignorance of history, we continue to repeat it.

Lynchings and the Need for a Visual Vocabulary: Lest History Repeat Itself

As John states, remembering our history and having a “visual vocabulary” helps us to avoid repeating a grave evil, as lynching was. To read about the efforts undertaken by the Equal Justice Initiative at the National Memorial for Peace and Justice, click here. And click here to listen to “Strange Fruit” by Billie Holiday.