Making Abortion Unthinkable and Illegal - Breakpoint
How can we respond to those around us with truth and love? Give today to receive this month's featured resource.
Skip to content 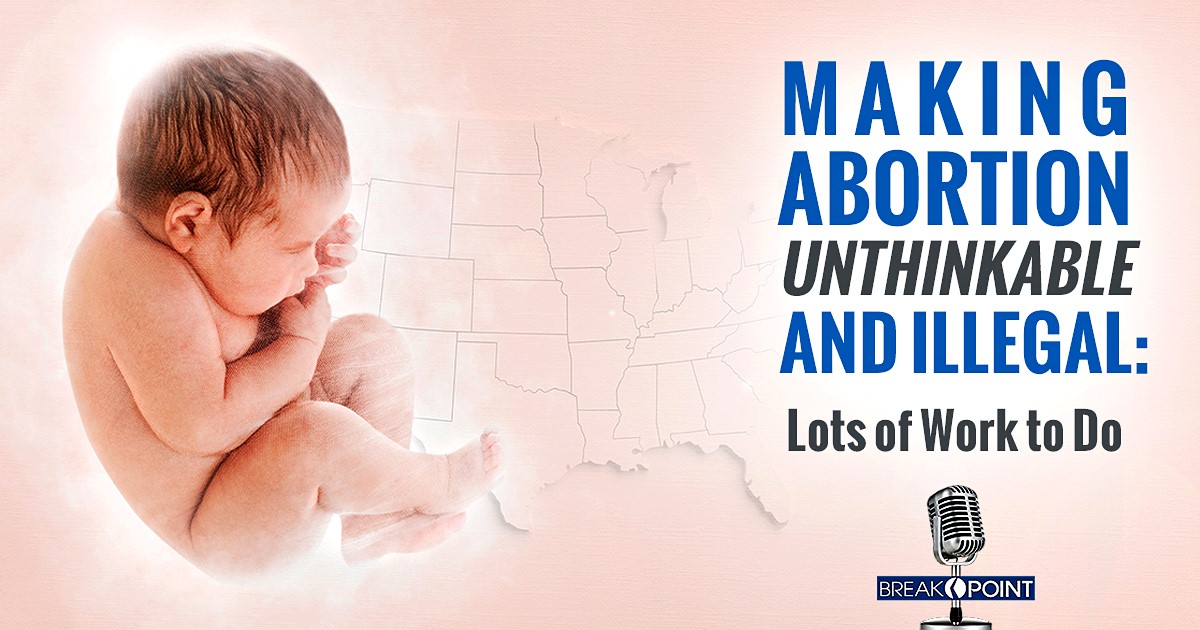 Last month, Phil Bryant, the governor of Mississippi, signed a bill that “bans abortions after a doctor can detect a fetal heartbeat during an ultrasound, unless the mother’s health is at extreme risk.”

The law, set to go into effect in July, would effectively ban nearly all abortions after about six to eight weeks.

Kentucky’s governor signed a law that prohibits abortions after six weeks. That law was blocked by a federal judge who ruled that the law was “potentially unconstitutional.”

As constitutional interpretation stands right now, he is probably correct. Even so, even abortion advocates are acknowledging that the days of Roe v. Wade may well be numbered. Which leaves us with an obvious question: What’s next?

Even if we see a complete reversal of Roe that explicitly states that a woman has no constitutional right to an abortion, abortion will still remain legal in many states, especially on the east and west coasts. It’s also possible that rather than overturn Roe, the Supreme Court will slowly chip away at it on a case-by-case basis, expanding the list of restrictions on abortion that can pass constitutional muster.

While some frustration with such a slow incrementalism is understandable, there’s little, if anything, we can do about it. The Court will decide Roe’s fate on its schedule, not ours.

In either case, here’s what’s becoming increasingly clear: The battle over abortion is shifting away from the federal government to the states, and will ultimately shift to the individual conscience.

We’ve already seen some of this shift at work. During the past decade or so, pro-life activists worked to elect pro-life legislators on the state level who would enact legislation that would test the limits of abortion license by limiting the time, the place, or the manner of abortion procedures.

As a result, 27 states have enacted waiting periods, another 18 mandate some kind of counseling, and more than 40 have laws limiting how far along in the pregnancy an abortion can be performed. In fact, nearly 300 such measures have been passed by states in the past decade. Currently, at least eleven other states are considering “heartbeat bills” like Mississippi’s and Kentucky’s.

At the same time, and especially since the 2016 election and the appointments of Supreme Court justices Gorsuch and Kavanaugh, advocates have begun to sense a real threat to the current abortion regime. So they’ve responded with state measures of their own, the most recent (and infamous) examples being laws in New York and Vermont that legalize abortion right up until delivery.

That’s only part of their preparations. A new book, called “Handbook for a Post-Roe America,” lays out a strategy to promote access to abortion even if most states outlaw it altogether. Among other things, it advises women who might become pregnant to start saving money, not only for an abortion itself but for traveling expenses, and it even provides maps to help them with planning.

We must resist the temptation to scoff at this if for no other reason than the book underscores an often overlooked reality: Even if Roe is completely overturned, most Americans will still live within driving distance of a state where abortion will be legal.

I’m not suggesting that the proposed laws are unimportant—on the contrary, pass more of them! I only wish to remind us that our goal is to make abortion unthinkable as well as illegal. And that means our work has only just begun. In fact, it may very well be the hardest part of our job is still ahead of us: making the pro-life case without the benefit of political tailwinds.

Let me be clear. I’ll be happy to see Roe go. We will throw a party when it happens. But celebrations must be short-lived. Our work continues.

And therefore, so must our preparations—whether to defend life, protect religious freedom, to educate and mentor young Christians… That’s why I ask you to consider joining our Colson Fellows Program. Study with outstanding worldview thinkers, read the best books on faith and culture, fellowship with committed believers, and most of all, develop a strategic plan for kingdom work where God has placed you. Check out the Colson Fellows Program at Colsonfellows.org.