News You Can Really Use - Breakpoint
Help make a bigger worldview possible for Christians around the globe with a year-end gift!
Skip to content 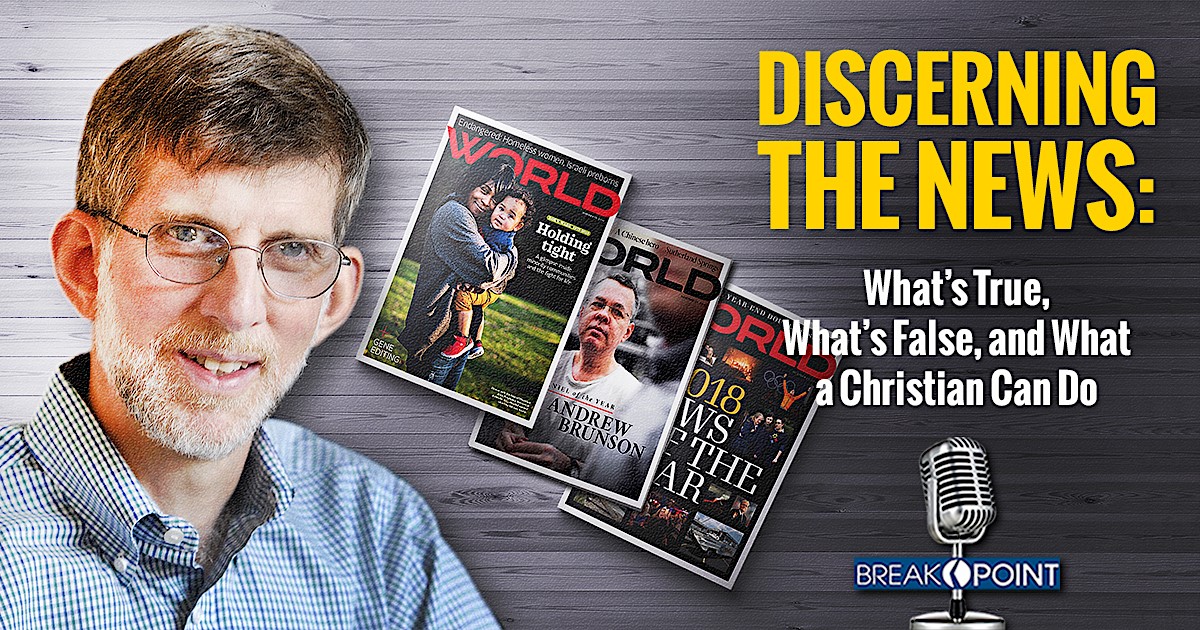 
News You Can Really Use

If you trust journalists and what you hear and read in the daily news media, you’re among a distinct minority.

Recent surveys reveal that journalism has fallen on hard times when it comes to public trust. In Great Britain, famous for scandalous tabloids, a recent poll revealed that less than one in five Brits trust journalists there to tell the truth.

It’s easy to see why trust is so low. We live in an era of “fake news” and “alternative facts.”  Most journalists working today were not only raised in a secular, postmodern culture, but trained in academic programs that were skeptical about the notion of absolute truth in the first place, and antagonistic toward classical norms and Christian values.

And yet, despite these ideological foundations and about three decades running in which the very notion of truth has been questioned, news media outlets and prominent journalists have spent the Trump administration proclaiming themselves neutral defenders of the truth. Much of America isn’t buying it. Or, as a Babylon Bee headline put it, “Culture in which all truth is relative suddenly concerned about fake news.”

The current lack of trust in our news media is a huge problem. America’s Founding Fathers knew that a free and unfettered press was vital to a healthy democracy, to keep the government honest and in check. That’s why freedom of speech and freedom of the press is found in the First Amendment, right alongside the freedom of religion.

Given all this, what can a Christian do?

First, we have to be discerning about what we read. I’m not saying don’t pay attention to big secular news outlets. After all, Chuck Colson used to joke that he read The New York Times everyday as penance for Watergate. But secular outlets ought not be our entire diet.

BreakPoint is a terrific supplement to any Christian’s news diet. We also work closely with WORLD News Group, publisher of WORLD Magazine and producer of the podcast “The World and Everything in It.” I’m a weekly guest on that podcast in a feature called “Culture Friday.”

Secondly, not only should we read widely, we should read actively. One of the best questions to ask a news story is, “What’s been left out?” Often times, secular outlets will ignore any religious or spiritual dimension. Stories about life, marriage, and religious liberty have obvious spiritual, moral, and ethical dimensions. But so do stories about crime, accidents, floods, and earthquakes. For example, it’s often Christians that are the first to run into those disaster areas. Their stories should be told.

Finally and most importantly, even if we aren’t an intricate expert on all things covered in the news, we can always be committed to developing a Christian worldview. The Bible is not only a book to be looked at; it’s a book to be looked through. Through the Scriptures, we can understand the difference between good ideas and bad ideas. And we can better recognize that every story, and every reporter, is coming from a worldview themselves.

And to help you be more discerning in your consuming of information and news, the Colson Center is partnering with WORLD News Group. In return for any donation to the Colson Center, you can receive a one-year subscription to WORLD Magazine.

WORLD’s Editor-in-Chief Marvin Olasky, one of the great Christian journalists of our time, will be joining us for a FREE webinar on January 14. You’ll hear his take on navigating the news and also be able to ask him questions.

To find out more about the one-year WORLD Magazine subscription, or to register for the free webinar with Marvin Olasky, come to www.breakpoint.org.