Pathologizing Masculinity - BreakPoint
Learn how to make abortion unthinkable by giving your gift of any amount today!
Skip to content 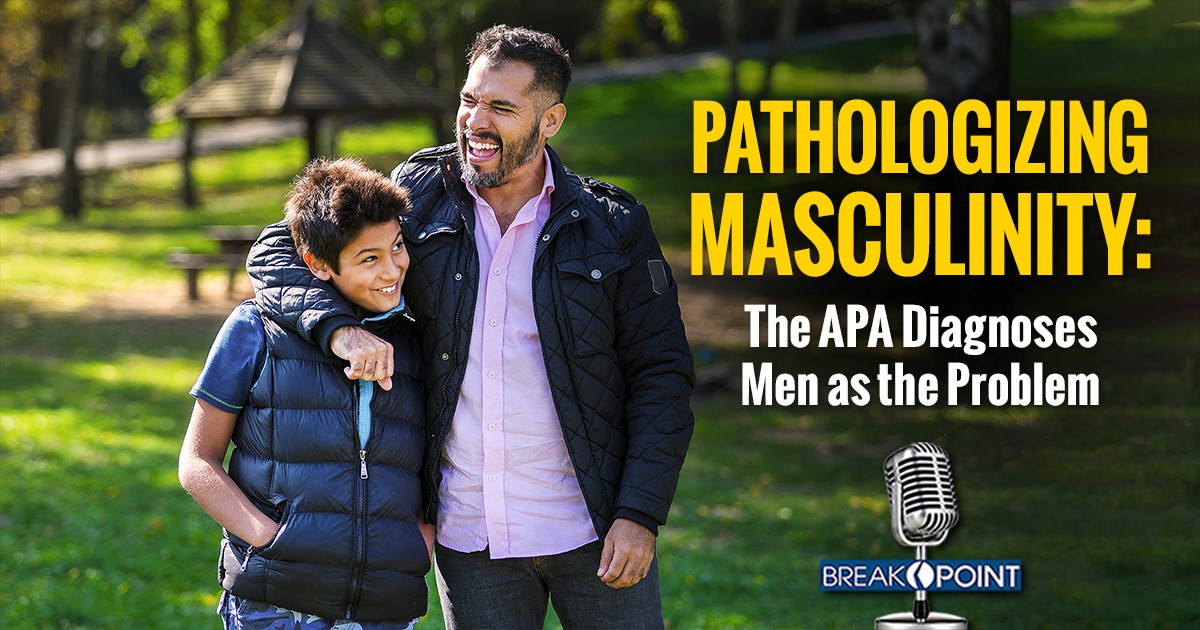 A new report on boys and men from the American Psychological Association reminded me, again, why worldview is so important. The report is the first of its kind from the APA, which has previously issued guidelines for girls and women, as well as for so-called “sexual minorities.”

For years now, the APA has been at the forefront of legitimizing progressive gender and sexual ideologies, and this report is in that same vein. To put it mildly, their conclusions are less clinical recommendations than they are naked worldview assertions.

Of course, the report isn’t all false ideologies. It opens, in fact, by recognizing a true and painful reality: Men and boys in America are not doing well. They’re diagnosed with ADHD at twice the rate of girls, they perform worse on standardized tests, they’re suspended and expelled from school at a disproportionate rate. As they get older, men use drugs and alcohol more often. They don’t seek help for mental health issues like depression as frequently as women do. They commit 90 percent of homicides, and make up 77 percent of homicide victims. They account for 93 percent of federal prison inmates and are 3.5 times more likely than women to commit suicide. In fact, male suicides are up more than fifty percent in the U. S. since 1980. We’ve talked of these so-called “deaths by despair” a few times on BreakPoint.

Faced with all of these troubling realities, the APA identifies the problem with men as being “traditional masculinity,” which they define as “anti-femininity, achievement, eschewal of the appearance of weakness, and adventure, risk, and violence.”

That’s not how I define traditional masculinity. Anti-femininity? Violence? That sounds like being a jerk. Reading between the APA’s straw-men and caricatures, it becomes clear what assumptions are really behind the report.

Traditional masculinity, the authors go on to argue, is socially constructed. Real gender is “non-binary,” the report says. In fact, even identifying male sex with masculine gender betrays “heteronormative assumptions.” In other words, masculinity does not objectively exist. It is whatever we make it. The report actually says, “Psychologists should help boys and men create their own concepts of what it means to be male.”

LGBT ideology is taken by the authors of the report as gospel. “It’s no longer just (a) male-female binary,” says one. The report criticizes “individuals with religious affiliations and conservative social and political views, who may equate masculinity with heterosexuality.” These folks, hints the APA, need to be cured of their errant views.

The game here is painfully obvious. This isn’t science, it’s a worldview that sees masculinity as anyone would have defined it just a generation ago as a problem needing to be solved. But as David French writes at the National Review, the APA has it all backward. The real plight of boys and men today coincides with our culture’s rejection of traditional masculinity, not the embrace of it! To say that the answer is to further deconstruct what it means to be a man is ludicrous.

Our society has no fixed categories of what it means to be a man, much less any resources for catechizing the next generation of men.

To be a man doesn’t always mean being a tough guy, though that can come in handy. But it does mean protecting, loving, leading, fellowshipping with God, and cultivating our garden as Adam was to cultivate his. Masculinity reaches its pinnacle in Christ, who far from being a man of violence, laid down His life for His beloved, and invites all men to do the same.

Our culture’s rejection of these created truths is at the root of much of the real turmoil that the APA documents. But the solution isn’t to caricature and then reject masculinity like a disorder. It is to re-discover and embrace real masculinity, which God declared to be “very good.” Thankfully, the traits and roles of real masculinity aren’t socially constructed. They’re innate—created by God as an expression of His image complemented by and working in concert with femininity.

Unless we recognize this, it won’t be socially-constructed concepts of masculinity we’ll be pathologizing. It will be men themselves.