People without a Purpose - Breakpoint
Give today to learn what it means to be a thoughtful Christian!
Skip to content 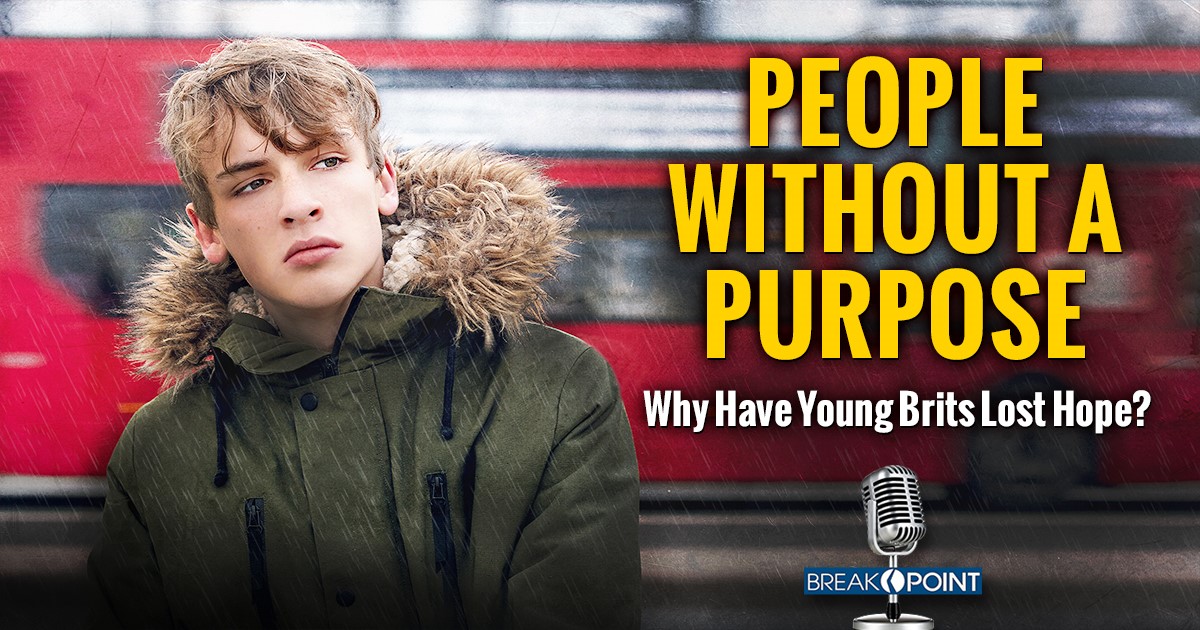 
People without a Purpose

Few things will bring on the goosebumps like listening to Winston Churchill’s 1940 “fight them on the beaches” speech, easily one of the strongest statements of national unity and patriotic defiance in all of human history.

The prime minister spoke for a people who, as he said, would “never surrender,” and he was right. Even with London smoldering from the Blitz and the nation standing virtually alone against Hitler’s war machine, they didn’t break. And their persistence eventually saw the tide turn and Europe liberated.

The secret to their endurance is really not a secret at all. The British in Churchill’s day were a people with a purpose. Churchill called what they faced a fight against tyranny, and the nation believed him. As C. S. Lewis observed in his wartime radio addresses, some of which later became part of his book “Mere Christianity,” the Nazis really were wrong, and the Allies really were right. Good and evil exist and can be known. That, Lewis observed, was a signpost to the meaning of life.

Britain has undergone quite a transformation since Churchill’s speech. Last week, the Sun reported on a new, nationwide survey that plied 1,500 Brits of all ages with a variety of questions about their attitudes and beliefs. Among the results: a stunning 89 percent of those aged 16 to 29 said their lives lack meaning and purpose.

In other words, Nihilism is running rampant among Millennial and Gen-Z Brits. Just half of those aged 60 and over gave similarly hopeless answers, which is still not a great result but certainly better than 89 percent.

The Sun suggests this means people find purpose in life as they age. Or, it could mean that Brits are steadily losing a sense of meaning and purpose with each generation.

Evidence for the latter interpretation comes from the answers participants gave to other questions: 84 percent of young people said they’re failing to “live their best life.” Nearly 40 percent also said they’d choose to re-do their lives if they could.

And, what would they change if they could hit that “reset” button? Over half of Brits believe they were put on earth to be as happy as possible. Only 37 percent said their purpose is to make other people happy. Less than a third thought they exist to do as much good as possible.

I can’t help wondering how different the results would be if this survey had been conducted in the middle of World War II. Would the British have been similarly aimless and preoccupied with personal happiness and fulfillment? Would almost 90 percent of young people, who bore the brunt of the war, say their lives lacked meaning? I doubt it. I don’t think a British population that hopeless would have had the resolve to withstand the Nazi assault and help lead the Allies to victory.

So, what happened? How did the Brits, who out-lasted the Blitz, transform into people unsure of life’s very purpose? My colleague Shane Morris and I wrestled with this question on last week’s “BreakPoint This Week,” and we offered a number of related answers, all rooted in the power of ideas.

When Churchill made those thundering moral pronouncements on behalf of his nation, he didn’t conduct a poll to find out who thought the Nazis were wrong or worth fighting. He didn’t ask each citizen to define their “best life.” And he certainly didn’t elevate individual happiness to the top of his wartime priorities.

But in a world where meaning is up to us, where life supposedly means whatever we say it does, it ultimately comes to mean nothing. A culture that abandons any fixed reference point and instead tells its young people that truth, purpose, meaning, and morality are purely subjective, will only, in the end, rob them of any truth, purpose, meaning, or morality worth fighting for.