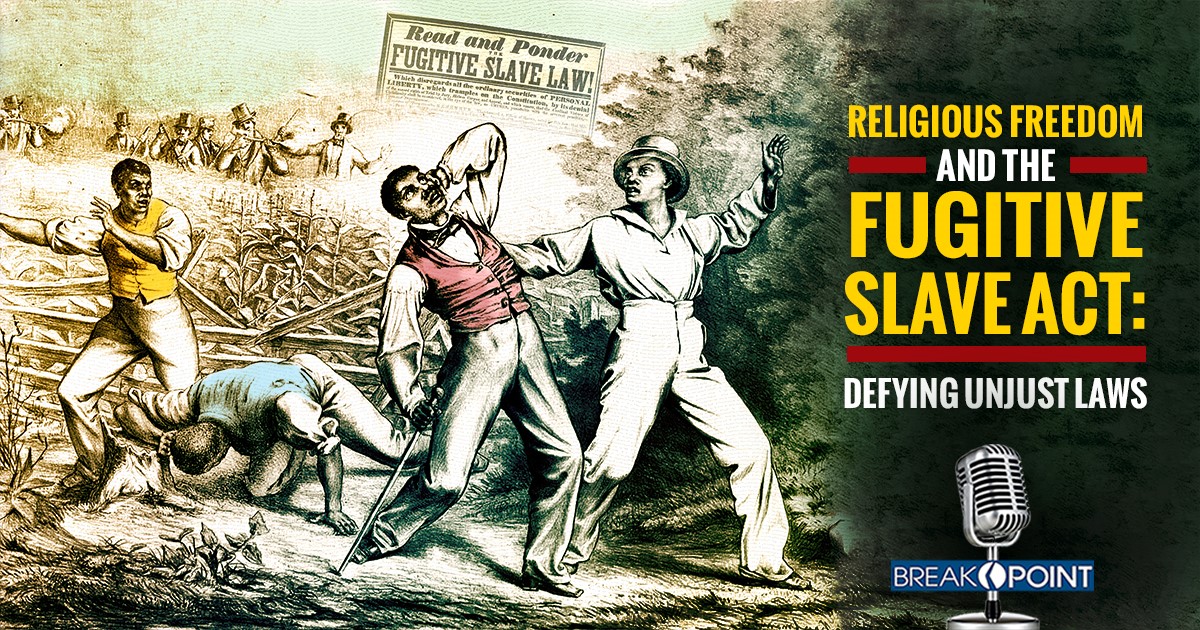 Is it ever right to force Americans to violate their deeply held beliefs? Abortion and LGBTQ advocates certainly think so. But history teaches us differently. If you’ve listened to BreakPoint over the past several years, you’ve heard us talk about the ongoing threats to religious freedom. We’ve talked about pharmacists in Washington State being forced to dispense abortion-inducing drugs or losing their licenses. We’ve talked about Christian adoption agencies forced out of business because they will not place children with same-sex couples. And of course you’ve heard about cake artist Jack Phillips, who refused to use his artistic talents for a same-sex wedding. These cases and others like them remind me of another time, long ago, when our government attempted to bully citizens into engaging in acts they believed were wrong. It had to do with a law called the Fugitive Slave Act. This Act, first passed in 1793, was an effort to force free states to return escaping slaves to their owners. But many in defiant Northern states found creative ways to circumvent this law. As Jared Brock writes in his fabulous new book, The Road to Dawn, (by the way, highly recommended), he says “throughout the mid-1800s, slaves continued to pour north,” settling in free states or Canada.  Southern slave owners “grew more and more agitated with each passing month,” he writes, and began pressuring northern states “to stop helping escapees.” Congress, attempting to tamp down tensions between free and slave states, passed the Compromise of 1850, which amended the Fugitive Slave Act. It included a demand that “everyone—law enforcement and ordinary citizen alike—[be] required to help catch fugitive slaves.” For example, Brock writes, the law made it illegal for any American to “withhold knowledge he might possess of any chance meeting with the fugitive.” If a citizen helped a slave escape, he could be arrested. And law enforcement agents “who refused to assist slave-catchers could spend six months in prison and be fined up to $1,000,” which is the equivalent of about $30,000 today. In effect, freedom-loving Northerners—especially the many Quakers who assisted escaped slaves—would now be forced to take an active part in an evil system—even if doing so violated their consciences. As Frederick Douglass, the African American abolitionist put it, the Fugitive Slave Act “created a crisis of faith as the country became ‘the enslaver’s hunting ground.”’ The Act outraged a certain feisty Christian abolitionist named Harriet Beecher Stowe, who had witnessed the evils of slavery firsthand. Her response to the Act was to defy it; she continued hiding runaway slaves. And so did many others. One historical account notes that “escapes from Kentucky increased 53 percent after 1850.” Today, we celebrate those who stood up to this unjust law. And we should honor, as well, those who defy the unjust laws of our time—such as, for example, medical practitioners who refuse to participate in abortions. How do we know which laws are just and which are unjust? Martin Luther King, in his Letter from Birmingham Jail, notes that “there are two kinds of laws: just laws . . . and unjust laws. One has not only a legal but a moral responsibility to obey just laws,” King went on, “but conversely, one has a moral responsibility to disobey unjust laws.” A just law, he said, “squares with the moral law of God. An unjust law . . . is out of harmony with the moral law.” Amen to that. Like the abolitionists of the 1800s, we may see our fellow Christians being jailed or put out of business for refusing to obey unjust laws—and we must do all we can to support them. Because, as Chuck Colson once said on this program, when our first freedom—freedom of religion—is gone, “we will, in short order, lose all of our other freedoms as well.”     Religious Freedom and the Fugitive Slave Act: Defying Unjust Laws Fighting for our religious liberty is not an option--and we should stand with those who are in this battle. There is certainly precedence in history for refusing to be coerced into obeying laws that are, as King would put it, "out of harmony with the moral law." For a look at examples of this, check out the links in our Resources section.