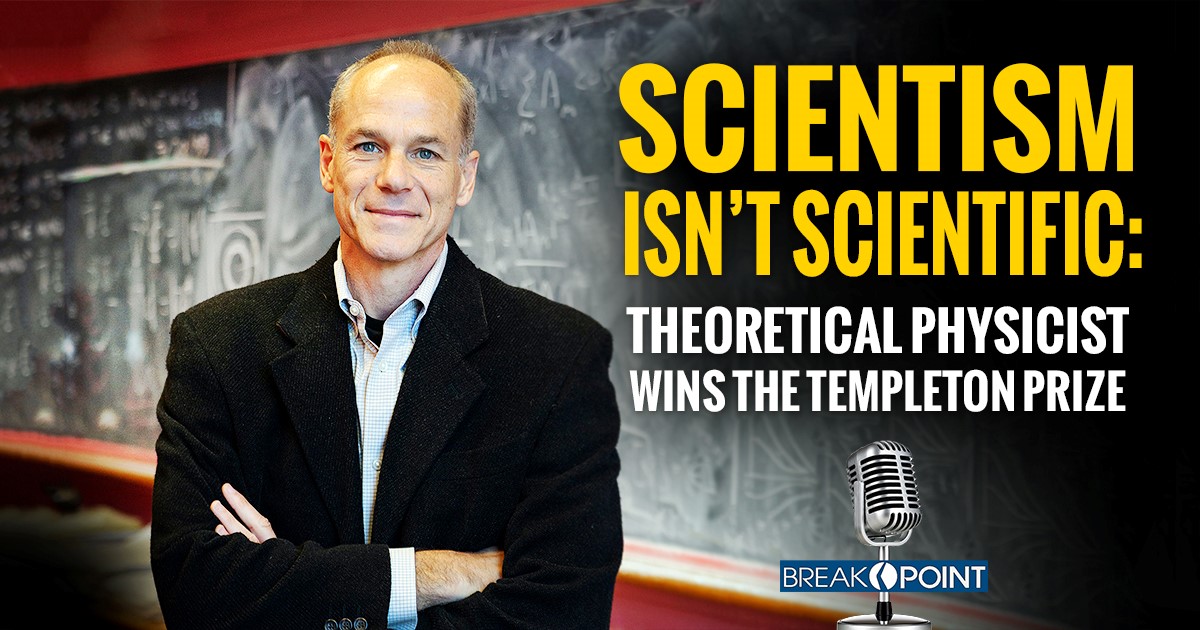 C. S. Lewis’s “The Screwtape Letters” has a lot of amazing insights on the working of our enemy, but one of my favorites occurs when the demon undersecretary advises his nephew: “Above all, do not attempt to use science…as a defence against Christianity. [It] will positively encourage [your patient] to think about realities he can’t touch and see. There have been sad cases among the modern physicists.”

Of course, what Uncle Screwtape calls “sad cases” are wins for Christianity! One such case is Dartmouth theoretical physicist Marcelo Gleiser, who was recently profiled by Scientific American. Gleiser is known for studying the properties of the early universe, the behavior of fundamental particles, and the origin of life—in other words, he’s studying those realities we can’t touch or see that Screwtape mentioned.

To be clear, Gleiser calls himself an agnostic, not a Christian. Still, he’s the latest recipient of the Templeton Prize—awarded to individuals who have made “an exceptional contribution to affirming life’s spiritual dimension.” The reason is simple: Gleiser, unlike many science popularizers in our day, boldly admits that science has its limits and urges his fellow scientists to respect those limits.

There’s a metaphor he uses to illustrate this, which he calls the Island of Knowledge. It’s also the title of a book he’s written. He urges us all to imagine all the discoveries of science as a small island, surrounded by an ocean of the unknown. “The paradox of knowledge,” he observes, “is that as it expands and the boundary between the known and the unknown changes, you inevitably start to ask questions that you couldn’t even ask before.”

In other words, science is so limited that not only are there many things we don’t know, we don’t even know how much we don’t know! Thus, the very best scientists are humble—recognizing the limits of their discipline and understanding that science cannot offer answers about ultimate meaning, purpose, or moral truth.

This is quite a contrast to many science popularizers, who frequently wander off the Island of Knowledge into water way over their heads. Gleiser mentions both Lawrence Krauss and the late Stephen Hawking, both known for making bold claims that science not only tells us how the universe exists, but why. Another well-known example is Carl Sagan, who famously began his “Cosmos” TV series with this pronouncement: “The cosmos is all that is, or ever was, or ever will be.” All of these men were or are outspoken in their atheism, confidently declaring that science disproves the existence of God, or at least renders Him unnecessary.

Categorical statements of non-belief like this, says Gleiser, don’t just go beyond the bounds of science. They’re actually incompatible with the scientific method.

“This whole notion of finality and final ideas,” he told Scientific American, is “just an attempt to turn science into a religious system.” There’s a name for that religious system: scientism—the belief that science is the only valid source of human knowledge. Instead of staying humble and curious, proponents of scientism insist that any question we can’t answer in a laboratory isn’t worth asking. In effect, they stand on the little island of knowledge and deny the ocean lapping at their toes.

This reminds me of a debate between apologist William Lane Craig and Oxford chemist Peter Atkins. Atkins called science “omnipotent”—that’s a Divine attribute! According to him, there’s nothing science cannot explain. Craig smiled, disagreed, and then listed five things science can’t explain: logical and mathematical truths, metaphysical truths like the existence of other minds and the external world, ethical values, aesthetic judgments, and most importantly, the scientific method itself!

Gleiser may not be convinced yet of God’s existence, but I do pray for the increase of this theoretical physicist’s tribe. We need more scientists who give faith a fair shake, and fewer advocates of scientism who think they already know all the answers.