Sign “A Declaration for Life” - Breakpoint
Give today to learn what it means to be a thoughtful Christian!
Skip to content 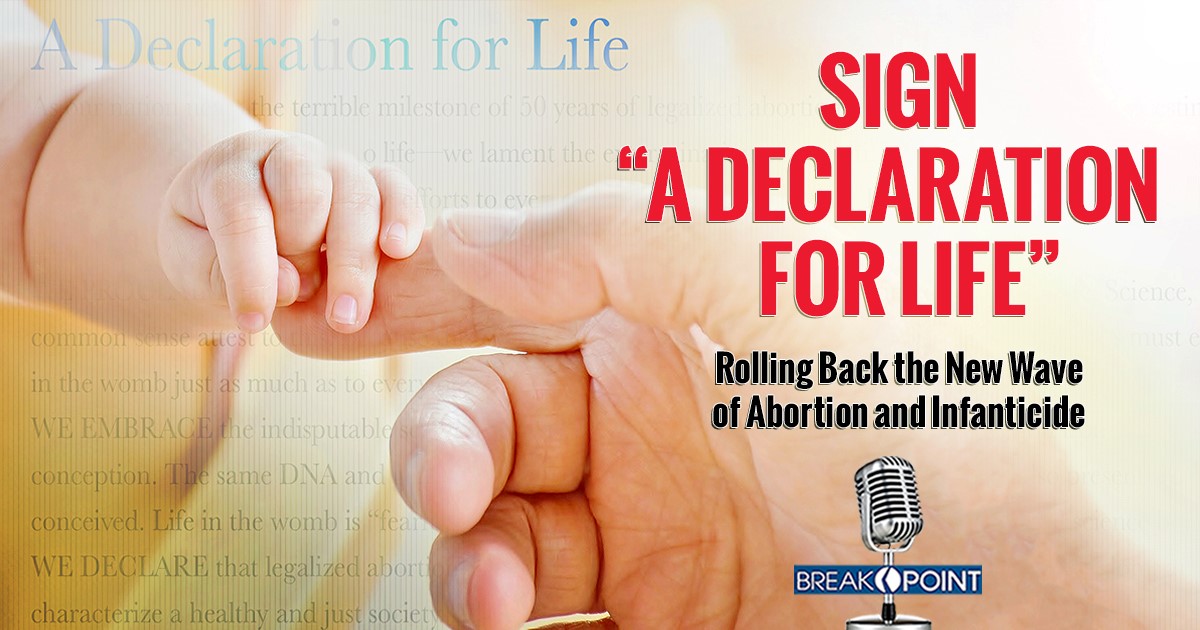 I still find it hard to shake that image of New York Governor Andrew Cuomo and New York legislators ghoulishly celebrating the signing of a bill that could allow the killing of babies right up to the point of birth for any reason.

Then, just days later, a Virginia legislator introduced a similar bill. And now-disgraced Governor Ralph Northam defended it on live radio, implying that babies with disabilities could be left to die after birth if the mother so chose. Thank God the Virginia assembly shelved that idea.

What you may not have heard is that legislators in Rhode Island, Vermont, New Mexico, and Illinois are preparing similar no-restriction abortion laws.

Let’s be clear. Something is happening here. This is a crucial moment. In addition to demonic activity, it’s clear that radical abortion advocates are motivated by fear—that the Supreme Court may soon overturn Roe v. Wade. They want to ensure their states will allow abortion at any time for any reason.

Christians, who believe that human life is sacred from the moment of conception until natural death, need to answer this new flurry of threats to life. We must put our prayers, skills, resources, and time to work on behalf of the most vulnerable victims in our society.

Which is why I want to tell you about a new campaign just launched by my friends at Focus on the Family. It’s called “See Life Clearly.” The very first thing to do is to sign their statement “A Declaration for Life.”

As Focus on the Family President Jim Daly announced recently, the See Life Clearly Campaign will culminate on May 4 in New York City. On that date, Lord willing, Focus on the Family “will broadcast live 4-D ultrasound images on a massive digital marquee in Times Square in the heart of New York City.” The event will also be simulcast worldwide. They’re calling it “Alive from New York”—you might catch the reference.

In other words, in the heart of Manhattan, where the nation’s most radical and cruel abortion law is now in effect, people will see with their own eyes that what the abortion movement so often hides as “a choice” or a “clump of cells” is indeed a precious life.

One way you can support this effort is to put your name to “A Declaration for Life.” You will be affirming that you believe that abortion is the taking of a human life, that science and Scripture affirm that life in the womb should be protected at every stage and is “wonderfully and fearfully made,” that with these new laws our states have reached “a tragic new low point,” and finally, that abortion is incompatible with “the virtues of compassion, freedom, and equality” that characterize a just society.

Now, it’s a good and vital thing to sign your name—to make a public declaration—that you support human life in the womb. In fact, it’s a great thing. But the Declaration for Life asks us to make an additional commitment: to WORK to defend life in the womb.

All of us who sign the Declaration are committing:

1) to advocate for pro-life legislation at the state level, including a ban on late-term abortions and those targeting babies on the basis of disability, sex or race;

2) to promote the end of government funding of the abortion industry;

3) to vote for candidates who respect the sanctity of life;

4) to urge the appointment of constitutionalist judges who will protect the fundamental right to life;

5) to support both women in  unplanned pregnancies and their babies through the good work of Pregnancy Resource Centers;

6) to encourage and promote the beauty of adoption; and

7) to pray fervently for a nationwide reawakening to the value and sanctity of every human life.

Until that day comes, the Declaration concludes, “we will push back against the culture of death. This is the moment we unite with one voice and proclaim, ‘No more.’”

Amen. I’ve already signed on. I hope you will do so as well.  And while you’re at it, consider joining us for the Alive from New York event May 4 in Times Square.

Come to BreakPoint.org, click on this commentary, and I will link you to A Declaration for Life.