The Biblical Edom Unearthed - BreakPoint
Learn how to make abortion unthinkable by giving your gift of any amount today!
Skip to content 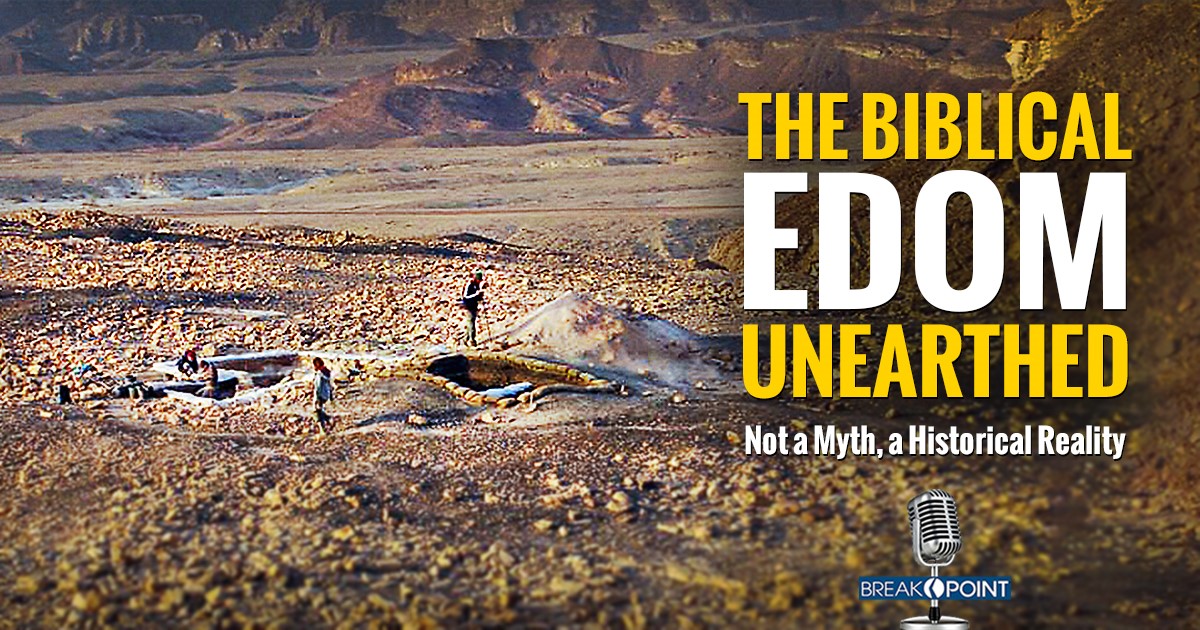 Over the years, many scholars doubted the Edomites even existed, at least as described in those biblical accounts. Specifically, they regarded the depiction in the Pentateuch of the Edomite Kingdom to be largely mythical. The real Edomite Kingdom, they believed, emerged three or more centuries later, during the latter part of Israel’s divided monarchy, and was “read back” into the story of the Exodus.

Well, these scholars were mistaken. Recently, a team excavating in Israel’s Timna Valley found evidence of a “thriving and wealthy society” dating back to the 12th century before Christ. What kind of evidence? An extensive network of ancient copper-smelting facilities were found in the parts of Israel and Jordan that the Bible associates with Edom.

As team leader Ezra Ben-Yosef told the Jerusalem Post, “copper-smelting was essentially the hi-tech of ancient times.” Given how complex the process is, any society responsible for such facilities would likely be technologically sophisticated and politically well-organized.

According to Ben-Yosef, “(these) new findings contradict the view of many archaeologists that [the region associated with biblical Edom] was populated by a loose alliance of tribes.” Instead, “they’re consistent with the biblical story that there was an Edomite kingdom here.”

Hmmm… there it is again: “consistent with the biblical story.” That phrase seems to pop up a lot in the world of ancient archaeology these days. For example, the excavations at Ashkelon that confirm the biblical account of the Philistines; findings on Mount Zion confirming the Babylonian destruction of Jerusalem—not just that it happened, but also when it happened; and on and on.

You’d think the sheer number of findings in recent decades that are “consistent with the biblical story” would soften the systemic scholarly skepticism toward Bible. It should, but it hasn’t.

One reason some scholars remain stubbornly skeptical is that most archaeologists and social scientists see Judaism and Christianity in the same way they see every other religion–an approach that obscures important distinctions.

Unlike other religions, historical detail is central, even crucial, to biblical faith. The biblical story reports on events that took place in actual human history. Unlike other religions, the protagonist of the biblical story is a God who has acted in the human arena, not in a mythical past or in another universe, but in the same setting as you, I, and everyone else who has ever lived.

Since historical memory, and the actual acts of God within human history, is so central to biblical faith, we ought not be surprised when we find evidence of His activity in the ground.

At the same time, we should be ready to communicate the connections between history and faith when appropriate and when asked. It’s a wonderful way to communicate to our skeptical friends, family members, and co-workers what we believe and why we believe it.

And to help you answer the tough questions you face, not only about Christianity and history but about all kinds of issues, the Colson Center has launched a new resource called “What Would You Say?” Each week, a new video tackles a tough question, offering clear, usable answers that you can pass on by sharing or by conversation. Check it out, and subscribe, at WhatWouldYouSay.org.