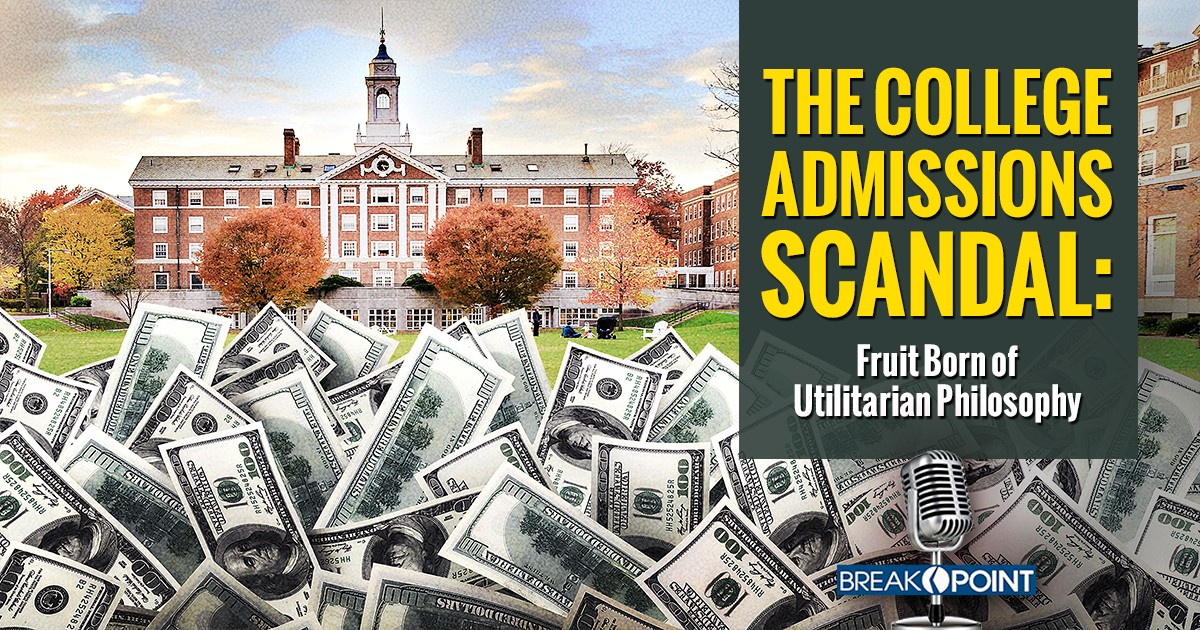 On Tuesday, the Justice Department announced the indictment of fifty people, including a pair of well-known actresses, for their participation in a series of schemes to get their kids admitted to elite colleges and universities.

According to one of the FBI agents involved, what’s been uncovered is “a sham that strikes at the core of the college admissions process.” But for many Americans, the indictments only underscored how different life looks for the wealthy. After all, even if they wanted to, not everyone could afford to participate in these costly shenanigans. Parents paid up to $75,000 for someone to take the ACT or SAT for their kids, or in some cases, to bribe test administrators to correct answers after tests were taken.

The Edge College & Career Network provided these crooked services, and then funneled funds through a charity called the Key Worldwide Foundation.

By covering their tracks, many students “had no idea that they didn’t get the score that they thought they got.”

And what if, in the hyper-competitive world of elite college admissions, acing standardized tests wasn’t enough? Well, colleges often hold spots open for athletes in certain sports, and for the right price, that very same Edge College & Career Network offered a different service of “bribing college coaches and administrators into designating (your) children as recruited athletes,” even if they never played the sport.

Since the scandal broke, most headlines have focused on which celebrity kid got into what school, and on which colleges have had employees implicated. What’s largely missing in the coverage is what the story says about the overall sorry state of higher education.

As the 2009 book “The Price of Admission” aptly described, entrance to elite colleges has been up for sale for quite a while. In some ways the people under indictment got a pretty good deal: They “only” spent hundreds of thousands instead of giving up millions in donations.

But still, the rot in higher education, especially at the elite level, goes far beyond the often-corrupt admissions process. The very idea of education itself is fundamentally misunderstood.

T.S. Eliot wrote about this a few generations ago in an essay called “Modern Education and the Classics.” In it, he identified, even then, a “crisis of education,” that largely resulted from a kind of utilitarianism that dominated the university, what Eliot called “getting on.”

Of course, even if the utilitarian vision currently captivating higher education wasn’t an infectious cancer throughout the whole system, it’s been a long time since many of the courses or degrees that students pay so much for can deliver on the investment, especially given the university’s captivity to progressive ideals and a dismissal of any real debate. Often, students graduate today un-hire-able.

Even so, what’s missing is a bigger vision of why we learn, why we stretch our minds, why we explore the unknown, and why we sharpen our skills. That’s what happens when the goal is to get a credential, not become a better person.

Or as one Duke University student put it, as quoted by Steven Garber in his book “The Fabric of Faithfulness,” “We’ve got no idea what it is we want by the time we graduate. The so-called curriculum is a set of hoops someone says we ought to jump through. No one seems to be asking, ‘how do people become good people.’”

All of this means that Christian colleges have an incredible opportunity to offer a meaningful alternative, given they don’t—as too many already have—fall into the utilitarian trap themselves. Christianity’s robust vision of what it means to be human, grounded in the idea of our being made in the image of God, has been the most powerful force in history driving the educational impulse and educational innovation.

It can do so again, without bribes and without indictments.

Now, you may remember that BreakPoint’s offer for this month is scientist John Lennox’s outstanding book, “Can Science Explain Everything?” If you’d like to download a sample chapter of his book, you can do so at BreakPoint.org/free.