BreakPoint: ‘The Noblest and Most Precious Work’ - Breakpoint
How can we respond to those around us with truth and love? Give today to receive this month's featured resource.
Skip to content 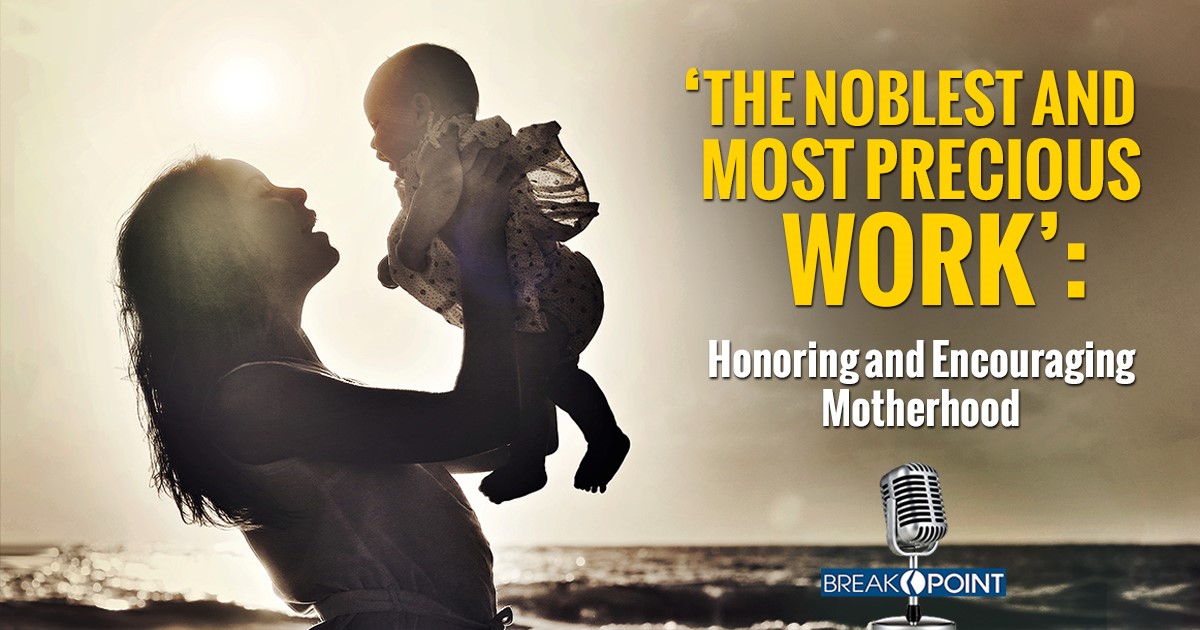 
BreakPoint: ‘The Noblest and Most Precious Work’

On Mother’s Day, most of us take intentional time and effort to show our moms how much we love and appreciate them, and how much we’re thankful for their love and sacrifice. I’m not always as intentional as I should be about honoring the moms in my life, especially the one who gave me life and the one who’s currently doing the really heavy lifting caring for our kids. But especially in this cultural moment, Christians should be the first, not only to honor current mothers, but also to celebrate and encourage future mothers. Andrea Burke, writing at For the Church, suggests that we’re not always very good at this. As a result, for too many young Christians, cultural attitudes toward motherhood are setting the tone. And it’s not a positive tone. Burke calls motherhood “the one life dream that makes a girl blush.” In her work directing her church’s women’s ministry, Burke regularly sits down with single, young women to talk about the future. They often confess that although they could pursue further education or a successful career in any number of fields, what many of them want is to get married and raise a family. By Burke’s account, these young women are smart and accomplished. They don’t have to prove anything to anyone. Still, they regularly talk as if choosing to be a wife and mom is a silly cop-out—somehow a waste of their lives. “When a 21-year-old sits across the table from me and tells me that she wants to be a mother,” Burke writes, “she blushes and gives a thousand caveats as to why she knows it’s not the optimal choice.” Where do young women get this low view of motherhood? Well, look around. According to a New York Times article last year, the average age at which women become mothers is now at a record high—30 or older in some parts of the country. The Times reported this as if it were a good thing, talking up the wonders of a “fulfilling career” and all-but-openly suggesting that the only reason any woman would have children young is because she couldn’t achieve the ideal professional life, and needs a substitute rite of passage to adulthood. The Centers for Disease Control and Prevention reports that the average birth rate failed to rebound after the Great Recession, and now sits at a rock-bottom 1.77 children per woman on average—that’s down over 16 percent from a decade ago. So now there’s a gap in our culture between the number of children women want to have, and the number they end up having. The Times explains, “it’s unlikely any future baby boom will be able to fully offset the baby bust of the last 10 years.” This means that “millennial women are likely to experience the largest shortfall in achieved fertility versus their stated family desires of any generation in a long time...” What does all this have to do with young women embarrassed about wanting to become mothers? Well, they need honesty from us—specifically from their parents, that whatever society says about the wonders of a successful career, they’re statistically likely to regret prioritizing promotions over parenthood. At BreakPoint.org, my colleague Shane Morris recently wrote a beautiful letter to his six-year-old daughter, in which he encouraged her to think of marriage and motherhood as callings worth pursuing, not as afterthoughts. Shane described how his daughter already is in the habit of tucking her little brother’s trucks to bed. Shane is right in seeing in those nurturing instincts things worth celebrating and cultivating. His letter reminded me of Martin Luther’s praise for nurturing tendencies in his commentary on Genesis: “How becomingly even little girls carry infants in their arms,” he wrote. “And how appropriate are the gestures with which mothers dandle the little ones when they hush a crying infant or lay it in the cradle...” Elsewhere he says: “In all the world this is the noblest and most precious work.” If you’ve got daughters (like I do) or granddaughters or even nieces, proudly tell these young women that if motherhood is their dream, they’ve got nothing to be ashamed of.     Download an audio mp3 here.