The Problem with Millennials... - Breakpoint
What makes the Church essential? Click here to learn more.
Skip to content 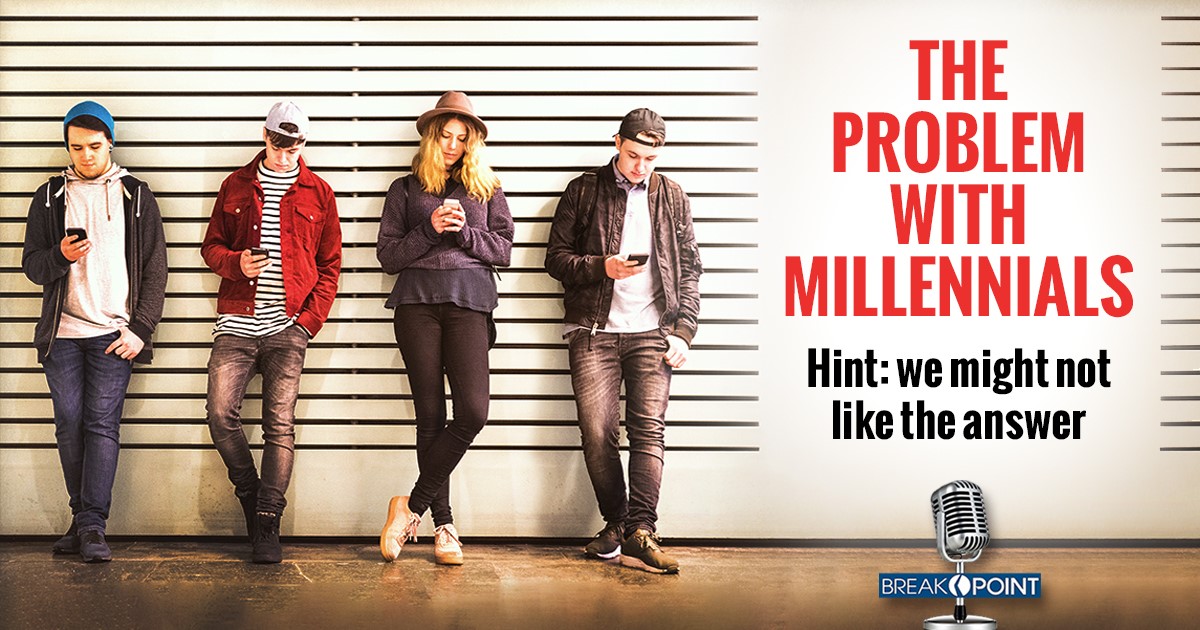 
The Problem with Millennials…

The infamous “Millennials” are the generational cohort born between 1980 and 1997, and they may be most-overanalyzed demographic group in American history. Unlike previous holders of that title, the “Baby Boomers,” most of the analysis of the Millennials has been negative, and has included words like “privileged, narcissistic, entitled, [and] spoiled.” That’s quite a cynical conclusion about more than eighty million people.

Here’s my controversial claim for today: Much of what we think is “wrong” with the younger generation, including the Millennials, can be attributed to the Baby Boomer and Generation X culture they were raised in, including their parents and other primary influences.

In full disclosure, I’m a Generation Xer. Once upon a time, we were what’s wrong with the world. And honestly, well, we kind of were.

Now the blame is leveled at Millennials, including a recent article in New York Magazine headlined, “Millennials aren’t that into God, Patriotism, or Having Kids.”

The article reported on a recent NBC/Wall Street Journal poll that compared the attitudes of Millennials with those of people 55-years-old and above. The results are somewhat stunning.

Another recent article from the Huffington Post declared that “Millennials are the reason for the spike in Prenups.” According to the American Academy of Matrimonial Lawyers, requests for prenups is on the rise, especially from Millennials – which is saying something because the overall marriage rate for Millennials is significantly on the decline.

While prenups are quite common today, that hasn’t always been so. Before the 1970s and the acceptance of no-fault divorce, courts generally saw prenups as undermining the permanence of marriage.

Now, according to the Huffington Post article, many younger Americans enter marriage assuming it isn’t necessarily permanent, and a prenup seems to be a smart way to plan ahead.

Writing for the New York Times magazine about breaking up with his girlfriend, David Samuels accurately described the worldview thread running through these two articles. “Our inability to imagine a future together was not ours alone,” Samuels said. “It was a symptom of a larger fracture or collapse, involving however many hundreds and thousands of people in their 20’s and early 30’s who seem to lack any sense of necessary connection to anything larger than their own narrowly personal aims and preoccupations.”

Here’s the thing: Samuels wrote this back in 1999. He was born in 1967. He is a “Gen Xer,” my generation; not a Millennial. But he accurately gets at something with which we need to reckon.

As one of our editorial team put it the other day, if there’s anything “wrong” with Millennials, it’s that their parents taught them too well. As Samuels’ quote demonstrates, the “lack [of] any sense of necessary connection to anything larger than their own narrowly personal aims and preoccupations” didn’t originate with Millennials.

The fruit we are seeing today is the inevitable results of cultural trends embraced in the 1960s and 70s that caused, in Samuels’ words, the “basic laws of social gravity [to lose] their pull.”

Why would Millennials value patriotism when they were taught not to by the culture? Maybe their parents taught them to be patriotic, but what else did?

How would they learn to value church when they were largely taught to “shop” around for the one they liked, the one that would most easily fit in to their lives without asking too much of them or being too invasive?

Why wouldn’t Millennials demand prenups if their fundamental vision of marriage never included permanence, and many never saw it by example?

When the only world they’ve ever known is one of infinite choice, why wouldn’t Millennials expect reality itself to bend to their self-determinations on everything from health benefits to gender identity?

Perhaps the principal fault of Millennials is that we taught them too well.