Time Magazine Denies Climate Change Deniers - Breakpoint
Give today to learn what it means to be a thoughtful Christian!
Skip to content 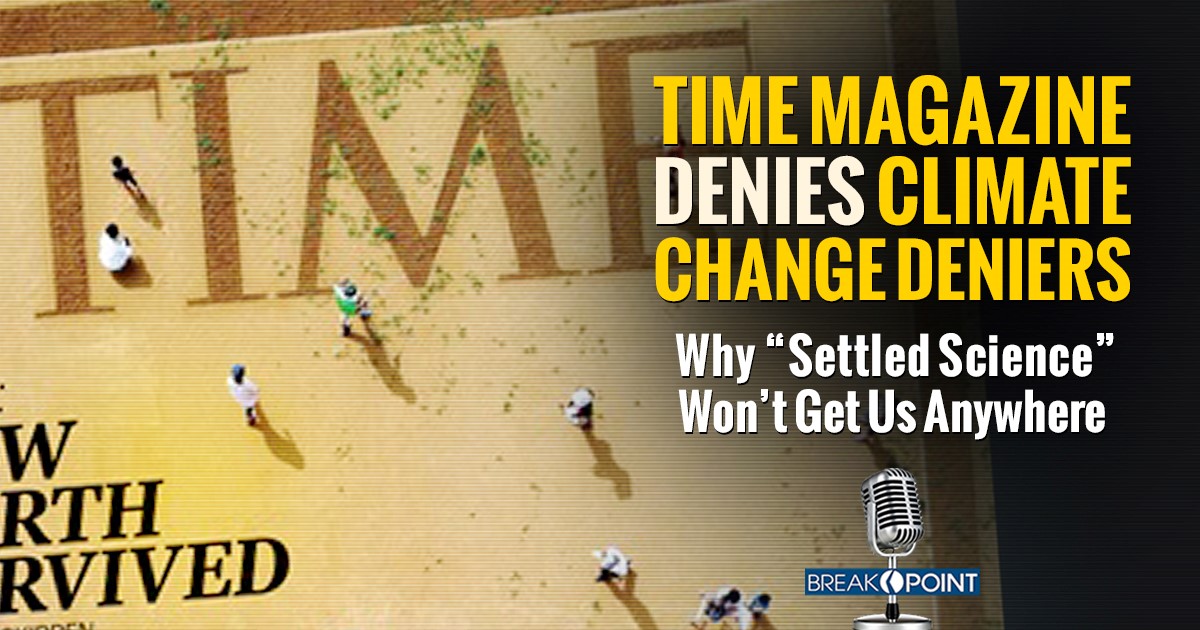 On Friday, tens of thousands of students around the world staged a walk out, leaving their classes to demand action on climate change. Well, some students walked out. Many school districts, including across the state of New York, just gave students the day off to join in the protests. It’s still unclear how many students joined the protests and how many enjoyed an extra day off.

What is clear is that there is no further room for anyone who questions that the planet is indeed warming, that the warming is human caused, and that it is catastrophic. Oh, and that we have run out of time to do something about it. Not only was that the loud and clear message from Friday’s student protesters, it was also the loud and clear message from last week’s issue of TIME magazine.

Titled “2050: How Earth Survived,” the issue is written from a perspective 30 years in the future, describing how we managed to avoid complete annihilation from climate change. It’s an issue full of breathless melodramatics and dogmatism, not least of which this paragraph from TIME’s editor-in-chief and CEO Edward Felsenthal in the opening editorial:

“Notably, what you will not find in this issue are climate-change skeptics. Core to our mission is bringing together diverse perspectives. Experts can and should debate the best route to mitigating the effects of climate change, but there is no serious doubt that those effects are real. We are witnessing them right in front of us. The science on global warming is settled. There isn’t another side, and there isn’t another moment.”

One of the people TIME does not want us to hear from is Judith Curry, who, prior to her retirement, was the Chair of the School of Earth and Atmospheric Sciences at Georgia Tech.

Curry doesn’t think that the science is “settled.” In her words, “If all other things remain equal, it is clear that adding more carbon dioxide to the atmosphere will warm the planet. However, the real difficulty is that nothing remains equal . . .”

In other words, we simply don’t know enough about how, as she puts it, the “sun, volcanic eruptions,” and the “interactions between the atmosphere and ocean,” impact the climate to claim that the science is settled. How much of measured warming and recent tropical storm activity is the result of these factors which are beyond human control? How much is increased CO2 the result of human activity? We are simply not sure.

There’s typically nothing wrong with admitting uncertainty. However, when it comes to this issue, by claiming the science “settled,” and treating those who disagree as “deniers” and heretics, uncertainty is no longer allowed.

For many people, a certain kind of environmentalist catastrophism has become a religion, and arresting climate change has become a crusade. The first casualty of this crusade is honest pursuit of the truth. David Wallace-Wells’s book “The Uninhabitable Earth: Life After Warming” is treated by many in the media and universities as scripture, complete with prophetic warnings about the end of the world.

Yet, as my Colson Center colleague Warren Cole Smith points out, there are scientists who strongly disagree with Wallace-Wells. For example, Michael Mann, the creator of the “hockey stick graph.” And he isn’t alone. Another climate researcher called Wallace-Wells’s predictions “sloppy” and “hyperbolic.”

Of course, I’m not saying that Christians shouldn’t care for the environment, or that we shouldn’t take the threat of climate change seriously. What I am saying is that there is no way to know what challenges we face, much less how we can confront those challenges, if we take the sort of “science is settled” approach that Time Magazine has.

If you’d like to understand this issue, take a look at the series of five articles below written by Warren Cole Smith. In this series, Warren asks tough questions about the history of the Earth’s climate, doomsday scenarios, why the climate is changing, and what we can do about it.

We can learn more about the issues surrounding climate change. Even if TIME Magazine refuses to.