When Suicide is Legal and the Money Runs Out - BreakPoint
Learn how to make abortion unthinkable by giving your gift of any amount today!
Skip to content 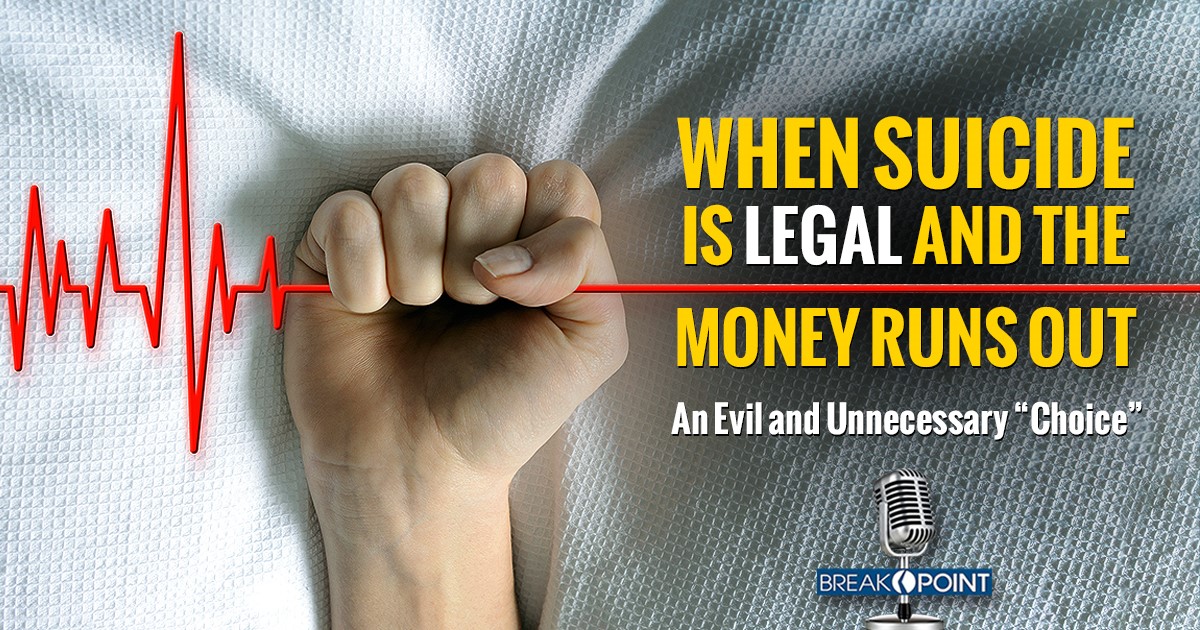 
When Suicide is Legal and the Money Runs Out

An ALS diagnosis is essentially a death sentence. There is no known cure. People with ALS eventually lose control over most of the muscles in their bodies–including the ones that enable them to breathe.

Despite his grim diagnosis, Tagert decided to live as long as he could for the sake of his son, who was six-years old at the time. For five years, he advocated on behalf of ALS patients and became a symbol of someone who refused to give up.

Then, last month, Tagert informed his friends he had decided to opt for physician-assisted suicide under Canada’s Medical Assistance in Dying law.

Why? Tagert didn’t give up because he believed the fight for life was no longer worth it. He gave up because those who could have helped him refused.

Totally-paralyzed and requiring a ventilator to breathe, Tagert required full-time care in order to live at home with his son. But government medical officials would only provide 20 hours of care a day. Thus, he could only get ‘round-the-clock care by moving to a group facility nearly five hours away from his home, and his son.

Tagert appealed this decision that was separating him from his boy. Officials never responded!

A Facebook post in Tagert’s honor put it this way: “The few institutional options on hand . . . would have offered vastly inferior care while separating him from his family, and likely would have hastened his death.”

And so, in Tagert’s mind, physician-assisted suicide had become the least horrible option.

His death has set off shock waves throughout Canada.

Dr. Leonie Herx, a palliative care specialist and opponent of Canada’s euthanasia law, is harshly calling her country to task: “We need a public outcry around peoples’ right to access care, to support them in choosing a right to life rather than just a right to death… We need to ensure [physical] needs are met before we get to a place where people are feeling like death is the only option.”

The Medical Assistance in Dying Act, like all pro-death legislation, sent a crystal-clear message that euthanasia is an acceptable alternative to palliative care. Inevitably, this will lead to decisions in which life is priced out, compared to the cost of resources. When the resources are scarce, the “right to die” will become the “duty to die.” In Tagert’s case, “scarce” was about $200 a day.

This scenario, as the disability-rights group “Not Dead Yet” has pointed out, isn’t limited to Canada. What happened in British Columbia can happen in Belgium, and in Oregon, and in New Zealand, and in Colorado, and anywhere physician-assisted suicide is legal.

In fact, the U.S. likely spends less on in-home health care services than Canada. As Pew Research has reported, “Medicaid and private insurance plans offer scant or no coverage of home visits” for patients with “serious, debilitating conditions who are not hospitalized or in hospice.”

Are we ready for this, Church? It took a couple of decades for pro-lifers to catch up on all the ways we could protect preborn life. Are we ready for the fight against legalized euthanasia? Are we ready to protect the vulnerable after birth? The Church has learned to support expectant mothers, to make apologetic arguments for when life begins, to offer ultrasound insight into the womb. What do we now need to learn about palliative care, debilitating disease, and family support? How do we help those who lack the resources to keep themselves alive? How do we get creative? Do things like medical sharing hold promise? Will we support faith-based hospices like we support pregnancy resource centers?

These are tough questions. So please, before we give up, let’s open our Bibles to Matthew 25 . . .