Did Christ Condemn Written Prayers? - Breakpoint
How can we respond to those around us with truth and love? Give today to receive this month's featured resource.
Skip to content 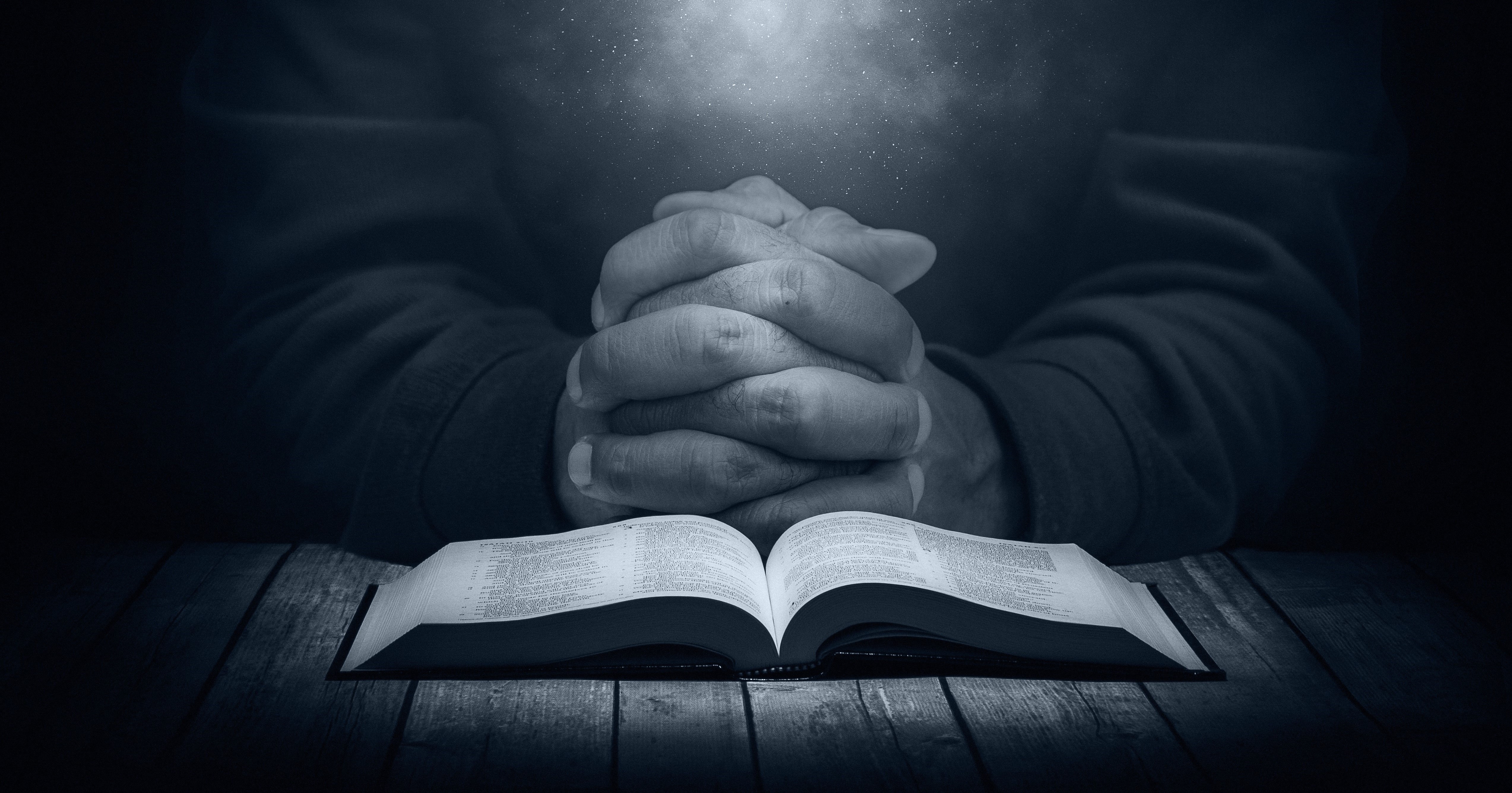 Something I’ve noticed is that Mr. Stonestreet will sometimes quote from the Book of Common Prayer. I found this comforting when Ravi Zacharias died, and even shared the post on my Facebook page. I’ve always been wary of going through prayer books though. This is because of Matthew 6:7-8 “When you pray, don’t babble on and on as the Gentiles do. They think their prayers are answered merely by repeating their words again and again. Don’t be like them, for your Father knows exactly what you need even before you ask Him!”

I’ve always assumed Catholics praying a previously written prayer or even other Christians repeating the Lord’s prayer was an example of this kind of ritualism. Am I misinterpreting scripture and missing something that could be helpful to my prayer time? If so, how are prewritten prayers supposed to be found and used? I know of friends who “pray through the Psalms” by meditating on David’s words. Do Shane and John practice things like that in their prayer time?

As John Stonestreet and Shane Morris noted when they replied to this on their podcast, this is a very good and important question. I’d highly encourage you to check out their response as they draw on their own lives in ways that are both poignant and personal. The gist of their answer is that they fully recognize the validity of this concern, but they also see the value in written prayers. I entirely agree with their assessment.

Something to keep in mind with this is the original context of Christ’s words here. The paganism of the first century was highly mechanistic. I don’t mean that they used machines but that their religion was not very personal. It was closer to a business transaction than anything we’d recognize as spiritual – I give X sacrifice, and the gods react with Y blessing. I offer prayer A, and my patron deity is, after a fashion, bound to give me what I want.

There was little sense of “Zeus loves me and has a wonderful plan for my life.” The gods were often indifferent to human affairs and had to be roused to pay attention and placated in order to get them involved. You would go to a priest and enact a given ritual, not meet with the Almighty in prayer. It wasn’t the relationship between you and the pantheon but the mere reciting of words, play-acting as a bribe to divine favor. You can see something of this in many Eastern religious acts. Think of Hindu believers with mantras or Buddhist acolytes endlessly repeating a chant.

This is the sort of thing that Jesus was responding to — more magic formulae than genuine prayer, an incantation where the words themselves are the agents of power. There’s no value in mindlessly and meaninglessly repeating words as though the Creator of the universe can be forced to obey us like a Genie.

So, how would this fit with Christianity? Consider the Lord’s Prayer. Certainly, we can repeat it as mindlessly as any of our pagan ancestors did with their chants, and I’ve no doubt that we’re all guilty at times of using it as a good luck charm rather than a genuine appeal to our Father who art in heaven. But remember how we’ve come to know it. It didn’t arise as a random custom. It came from someone asking much the same question you are: “How should we pray?” In response to His disciples’ query, Christ laid out these words as the pattern of our prayer

Now, perhaps we could argue that it was just this, a pattern or template, not something we’re to repeat word for word but simply a general guideline. I think that’s a stretch to say that as an absolute rule, but, even were that so, we’re still left with a Bible chock full of written prayers.

Think of the Psalms. It’s the largest book of the Bible, and it is a series of written prayers explicitly intended for corporate recitation. We often pass over the details at the start of each Psalm, but notice how many times  prefacing the words of praise or lament are instructions for their recitation, things like, “To the choirmaster” or “To the tune of the lilies.” These are written to be prayed. We may go back and forth about how they’re best to be used, but it’s pretty hard to argue against written prayers if, in God’s own Word, He chose to include such things for His people.

Finally, while we may reasonably be concerned over the helpfulness of written prayers, there’s hardly a Christian who doesn’t use them. I don’t mean that since most of us use them it makes it okay. The Church is entirely capable of being carried away by a false idea, at least for a time. What I mean is that I’d bet that for all our fears over written prayers, even those of us who come from non-liturgical traditions use them each and every Sunday.

What’s the one thing you can find in both a highly liturgical Roman Catholic or Anglican service and a very low Church nondenominational congregation? They sing. The songs differ in style and content, as does the level of participation by the people in the pews, but they all sing. And, they don’t just sing random words. They sing written songs; written prayers to God. After all, what is a hymn or praise chorus but a prayer?

None of this is to say that your concerns are unfounded. In fact, the danger posed by written prayers as you’d find in prayer book from centuries past are just as present in a song that’s newly conceived. We can slip into mechanical pseudo-prayer no matter how fresh or ancient the script. The problem lies in our own hearts, not in the words written for us. This means that such false prayer can manifest all its own.

I can’t be the only one who sets aside a time for prayer only to find that my mind has wandered into who knows what. Sometimes it’s not even distraction into worldly or idle thoughts but just that I’m no longer talking to God but having a conversation with myself. In a worst-case scenario, we can convince ourselves of divine leading when all that’s happened is we’ve assigned a “godly” motivation to what we’ve already decided to do! The danger isn’t “out there” but “in here.”

Let me end with two virtues of prepared words.

As John mentioned in his comments, there are times when another soul is able to put into words the very thing we’re feeling. We see this in poetry and song and all sorts of other signs of human art. We listen to sad love songs after a breakup because by hearing and singing those words, the anguished cries of our hearts find their voice. The same can work with songs of praise to God. Sometimes it takes the skill of another human being to give us the words we need in our moment of pain or joy.

The other has to do with the purpose of worship. Yes, there is an element of expression that’s needed in times of praise to God. There is a sharing from our hearts to His ears in prayer that the Bible regularly praises. But, there’s also another thing going on. We aren’t just pouring out praise offerings through our words; we are being shaped by them. Particularly when we are straying in our minds and hearts, reciting words that we know are true realigns our souls to the Him in a way that expression alone cannot. When in despair, we find our hope in not just hearing but saying that the Lord is good. When drifting in our doctrine, we are set back on the right path by declaring the very truth we’re ignoring. Prayer is a key means God uses to shape our hearts even as we share them with Him.

Written prayers can become an obstacle to true relationship with God. That’s true, but so can our passing fancies when disguised as “authentic” communion with Him. Our sinful hearts are so prone to wander that we should take care when practicing either type of godly prayer. Our prayers should be characterized by a genuine faith-expression that is constantly being shaped by the accumulated wisdom of Christ’s Church and revealed Word of God.

If there is an issue you would like to see addressed, send an email to askthecolsoncenter.org