Generation Z, Justice, and the Gospel - A Call for Balance - Breakpoint
Give today to learn what it means to be a thoughtful Christian!
Skip to content 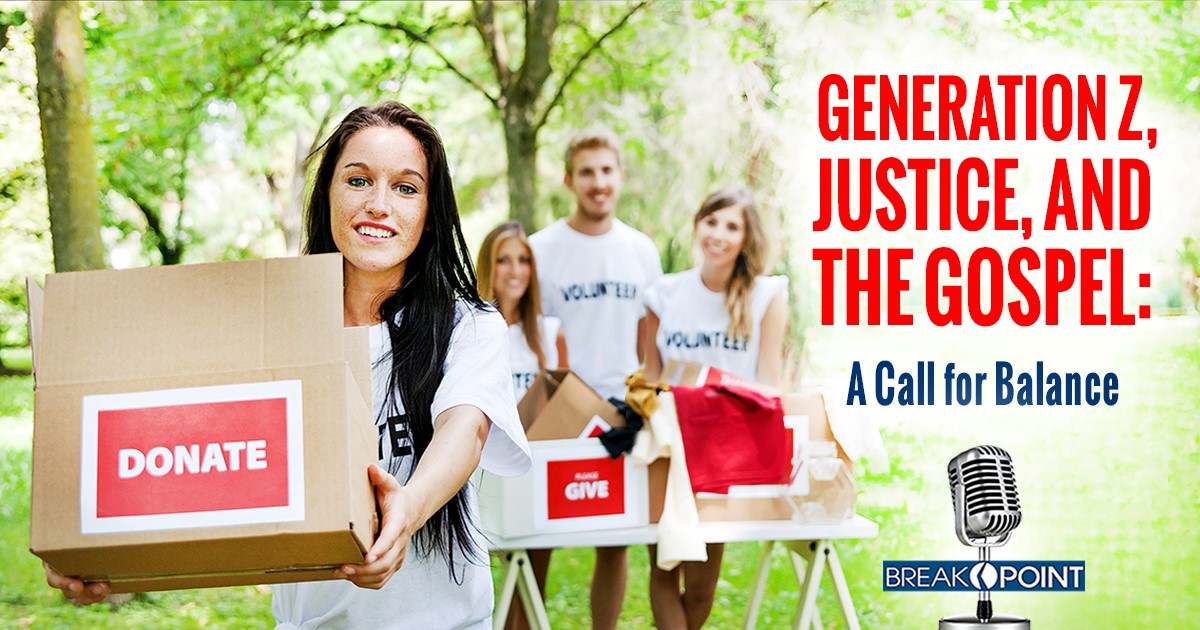 
Generation Z, Justice, and the Gospel – A Call for Balance

Many members of Generation Z are choosing justice over the gospel, but they don’t have to. They can choose both.

Generation Z—roughly those young people born between the mid-1990s and mid-2000s—is known for a lot of things: its technological savvy, its commitment to social justice, its loneliness, its online connectedness, and its seemingly endless quest for “authenticity.” One thing it’s not as known for is a commitment to gospel proclamation and traditional evangelical doctrines.

Writing about these “young evangelicals who have ‘expanded their mission’ to include social justice along with evangelism,” pastor and author Tim Keller says, “Many of them have not only turned away from older forms of ministry, but also from traditional evangelical doctrines of Jesus’s substitutionary atonement and of justification by faith alone, which are seen as too ‘individualistic.’”

And for all the good they’re doing—and they are—Generation Z Christians have become unbalanced. That’s not old fogeys like me or Tim Keller talking; it’s coming from one of their own: Jaquelle Crowe, the author of “This Changes Everything: How the Gospel Transforms the Teen Years.”

Writing for The Gospel Coalition, Crowe says, “The fundamental problem is that we’ve created a false dichotomy. When you pit justice and gospel against each other, you miss the point of the Bible and devalue God’s heart for both. Justice fits squarely in the framework of biblical Christianity. It flows fiercely out of the gospel as a practical implication of loving God.”

Now, that’s a common theme of the Colson Center. John Stonestreet, my colleague here, has talked a lot about truth and love not being in opposition. And he’s exactly right. As the letter of James reminds us, what good is it to say, “Stay warm,” without giving someone a blanket? That is how we can begin bringing balance back to the gospel.

Pointing to the shining examples of William Wilberforce, Hannah More, and Dietrich Bonhoeffer, Crowe says we need a biblical balance not of justice or the gospel, but of justice and the gospel. But Crowe goes a step farther. She says we need to make the gospel our priority, because only a right understanding of the human predicament before heaven will power our passion for justice on earth.

“If we want to live out justice the way God commands and celebrates,” Crowe says, “we must prioritize the gospel. If we truly want to see human flourishing and reduce global suffering, we need to deal with the biggest problem humanity faces: sin and death.” She’s right, and because you’ve heard plenty from me about Bonhoeffer and Wilberforce, let me point out another example.

William Carey was an 18th-century cobbler-turned-minister who heard God’s call to go to India and became known as the “father of modern missions.” Urging his fellow Presbyterians to care about the lost, Carey said, “Multitudes sit at ease and give themselves no concern about the far greater part of their fellow sinners, who to this day, are lost in ignorance and idolatry.”

But Carey’s concern for the lost didn’t stop with their souls—far from it! Besides translating the Bible into many Indian languages, Carey was instrumental in banning the Hindu practices of sati—which is widow-burning—along with infanticide and assisted suicide. He lived out a personal philosophy that any Christian can get behind: “Expect great things from God, attempt great things for God!”

Jaquelle Crowe would agree, saying, “We need justice operated out of gospel love,” adding, “That’s what Jesus did. He drew water for the thirsty and told them about the Living Water that could eternally satisfy. He served food to the hungry and preached about the Bread of Life.”

Thank God for Generation Z Christians who are passionate about justice, and for Jaquelle Crowe, a young woman who knows that justice and the gospel go together and who is bold enough to call her generation—Generation Z—to own all of the gospel.

[Editor’s note: In the original text of this commentary we identified William Carey as a Presbyterian missionary. We erred. He was a Baptist.]

Generation Z, Justice, and the Gospel: A Call for Balance

Kudos to those of this generation, like Jaquelle Crowe, who marry the concepts of truth and justice even as Christ demonstrated. As Eric pointed out, the priority of the good news, the Gospel, leads us to walk out the truth through our words and our actions, to work toward human flourishing and justice for all.