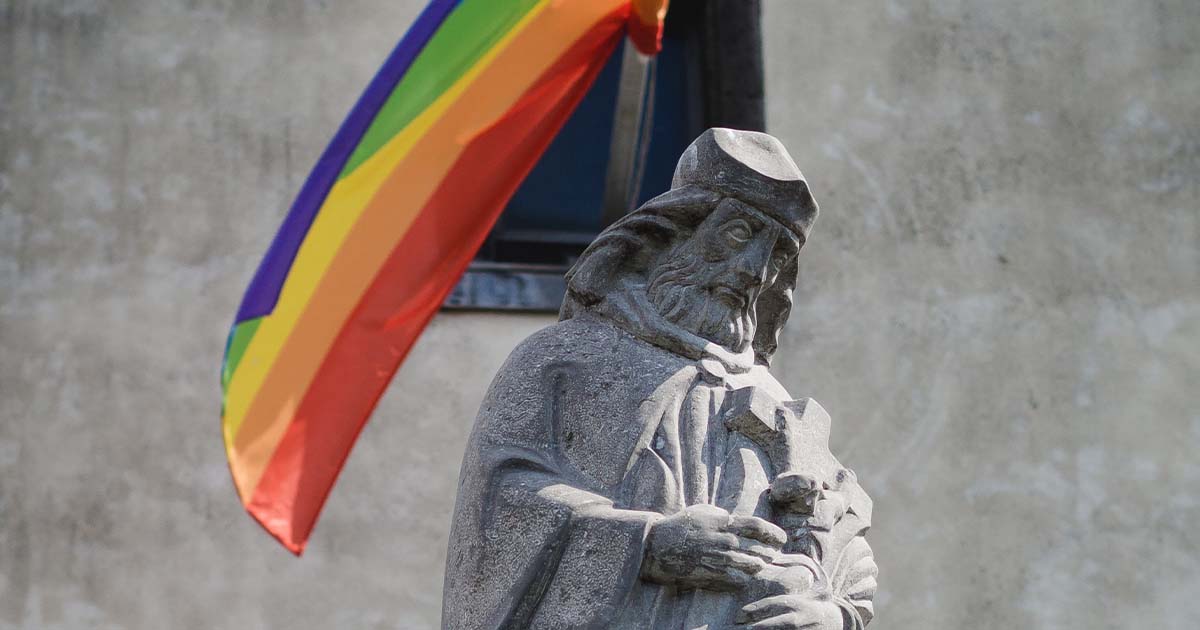 Dotting many U.S. main streets are the steeples and towers of beautiful and historic buildings, originally built as houses of worship. From its founding, mainline denominations gave America a kind of Protestant consensus, much of our nation’s charity, many of its most prestigious schools, and a significant number of congressional leaders and even presidents. Today, many of these buildings, especially those draped with rainbow flags, lie empty. On Sundays, only a small number of worshipers, mostly white and grey-haired, sit in the pews.

Back in 2017, missiologist Ed Stetzer made a dramatic prediction in the Washington Post. “If it doesn’t stem its decline,” he wrote, “Mainline Protestantism has just 23 Easters left.” Stetzer blamed the Mainline church’s impending extinction on abysmally low birth rates, and the fact that many of them long ago “abandoned central doctrines that were deemed ‘offensive’ to the surrounding culture.”

However, last month a new survey from the Public Religion Institute challenged Stetzer’s prediction. Called “The 2020 Census of American Religion,” the report claimed that Mainline churches in America have experienced a dramatic recovery. According to this survey of 50,000 Americans, Mainline Protestants grew from 13 percent of the population five years ago to over 16 percent in 2020. Meanwhile, evangelicals seem to have entered rapid decline, tumbling from 23 percent of the U.S. population in 2006 to just 14 percent in 2020.

Over at The New Yorker, Bill McKibben celebrated the “unlikely rebound” of Mainline Protestantism, and made conclusions that a political shift had happened in American Christianity.

However, as Lyman Stone of the American Enterprise Institute pointed out, the methodology used by the PRRI survey suffers from serious flaws. For example, all self-identifying white Christians who did not use the labels “evangelical” or “born again” were categorized as “white mainline Protestants.” Stone called this categorization “bonkers,” a little like assuming that anyone who doesn’t identify as a New York Yankees fan must prefer hockey. More importantly, the terms “evangelical” and “born again” are “generationally-coded” as Stone puts it, not reliable indicators of beliefs or denominational affiliation. In fact, Stone points out, around 40 percent of members in evangelical churches would not describe themselves as “born again,” while 20 percent of those in Mainline bodies would. A conservative resurgence in a handful of the mainline denominations would also be a problem for PRRI’s methodology.

A better measure of evangelical affiliation, suggest Stone and Stetzer, is what’s known as the Bebbington Quadrilateral. David Bebbington, a British historian, distinguished evangelical identity by four essential beliefs: Biblicism, crucicentrism (a focus on Christ’s atoning work on the cross), conversionism (believing that human beings need to be saved at a personal level), and activism.

Any announcement of a resurgence of Mainline liberalism is premature and probably exaggerated. These aging, shrinking communions will probably become irrelevant within our lifetimes, but it’s not because evangelical Christianity is “winning” in any real sense. Liberal churches are shrinking because they are impossible to distinguish from the larger culture. Why get up and go to church on the weekend when the same teaching is available on NPR every day of the week? At the same time, evangelicalism is suffering an identity crisis featuring high-profile deconversions, scandals, and theological anemia. How many evangelical churches today could be described by Bebbington’s four essentials? In some ways evangelicalism may be repeating the mistakes of mainline liberalism.

Recently, on the Colson Center’s Upstream podcast, my colleague Shane Morris spoke with Mark Tooley of the Institute on Religion and Democracy, about the so-called “rebound” of Mainline churches. As a longtime member and observer of United Methodism, Mark gave a spirited defense of the good Mainline Protestant churches did in American history, and explained why permanent cultural exile isn’t something evangelicals should be celebrating.