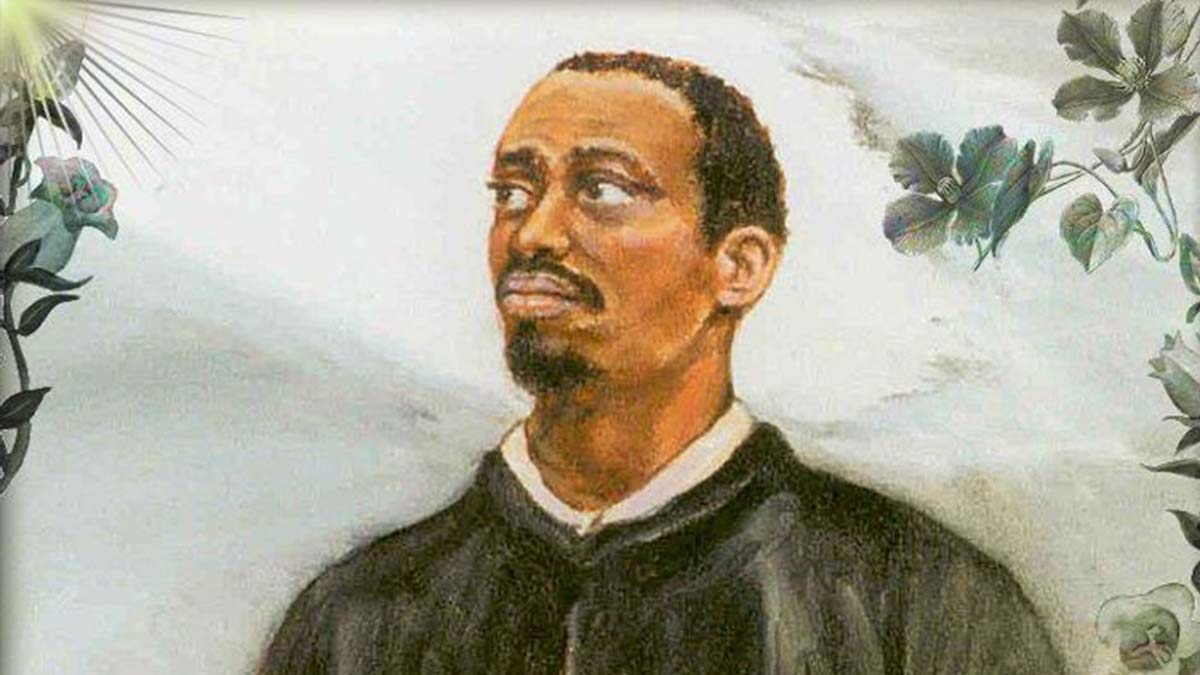 Martin de Porres was born in Lima, Peru, in 1579 – the illegitimate son of Don Juan de Porres, a Spanish nobleman. His mother, Ana Velázquez, was a freed African slave from Panama. When Martin was born with his mother’s dark skin and features, Don Juan denied he was the baby’s father. Don Juan abandoned Martin, his sister, and his mother while Martin was still a boy.

Martin grew up in poverty and, because he was of mixed race, suffered social stigma. He attended school for two years until the age of 12, before apprenticing as a barber-surgeon. He learned to cut hair, bleed patients (in keeping with current medical practice), and to prepare and administer medicines.

As a boy, Martin developed an active prayer life. He spent many nights praying to devote himself more completely to God.

At 15, Martin committed his life to serve the church. Because Peru banned descendants of Africans and Indians from joining religious orders, Martin approached the Dominicans of the Convent of the Holy Rosary in Lima, asking to simply be a servant at the Convent.

Initially, Martin worked menial jobs, helping in the kitchen and performing manual labor at the monastery. He cleaned the rooms of the Friars, earning the nickname “saint of the broom.” He continued developing his prayer life and spiritual practices, receiving recognition for his humility, which enabled him to ignore insults he received for his mixed-race ancestry.

Martin’s diligence and spiritual growth attracted the attention of his superiors in the convent, earning him greater responsibility. When the leadership disregarded the law and invited him to become a lay brother in the convent, he refused the offer several times, thinking himself unworthy of the honor. Eventually, when ordered to accept the position, Martin reluctantly agreed.

As a lay brother, many offices within the convent opened to Martin. He continued to work in the kitchen, but with his background in medicine, he also became the convent’s barber and began serving in the infirmary. Martin was skilled as a healer and, unlike many in his profession, treated everyone with dignity, whether rich or poor, Spanish or native, free or slave. At one point, Martin took in a beggar covered with ulcers, putting the man in his own bed to care for him. When one of the brothers in the convent rebuked Martin for this, he replied, “Compassion, my dear Brother, is preferable to cleanliness.”

When an epidemic broke out in Lima, Martin focused his care on the Holy Rosary’s sick, but also had great compassion for the broader community. Fearing the epidemic would spread to the brothers, the head of the Dominicans in Lima forbade Martin from taking in more people. Martin sent the sick to his sister’s house in the countryside and cared for them there.

Martin’s godly character, humility, and work in the infirmary birthed various stories of miracles. Whatever we make of these reports, there is no doubt of his compassion and skill as a healer.

Martin also cared deeply for animals. He refused to eat meat and set up a shelter for stray cats and dogs at his sister’s house. Because of his remarkable rapport with animals, images of Martin often depict him holding a broom, with a dog, cat, and mouse eating out of a shared dish at his feet.

Martin’s humility and frugality led him to wear his habits until they were completely threadbare, except for one fresh habit in his trunk, for his burial.

During his lifetime, Martin was considered a living saint. After his death, many miraculous healings were attributed to him. Through discipline in prayer and faithful service, and by avoiding distractions, he strove for faithfulness, not success. Throughout his life, Martin exemplified Paul’s words to the church in Corinth: “Therefore, my dear brothers and sisters, stand firm. Let nothing move you. Always give yourselves fully to the work of the Lord, because you know that your labor in the Lord is not in vain.”