Masculinity, Bravery, and Volodymyr Zelensky PLUS: Hope and Commercial Surrogacy in Ukraine - Breakpoint
Help make a bigger worldview possible for Christians around the globe with a year-end gift!
Skip to content 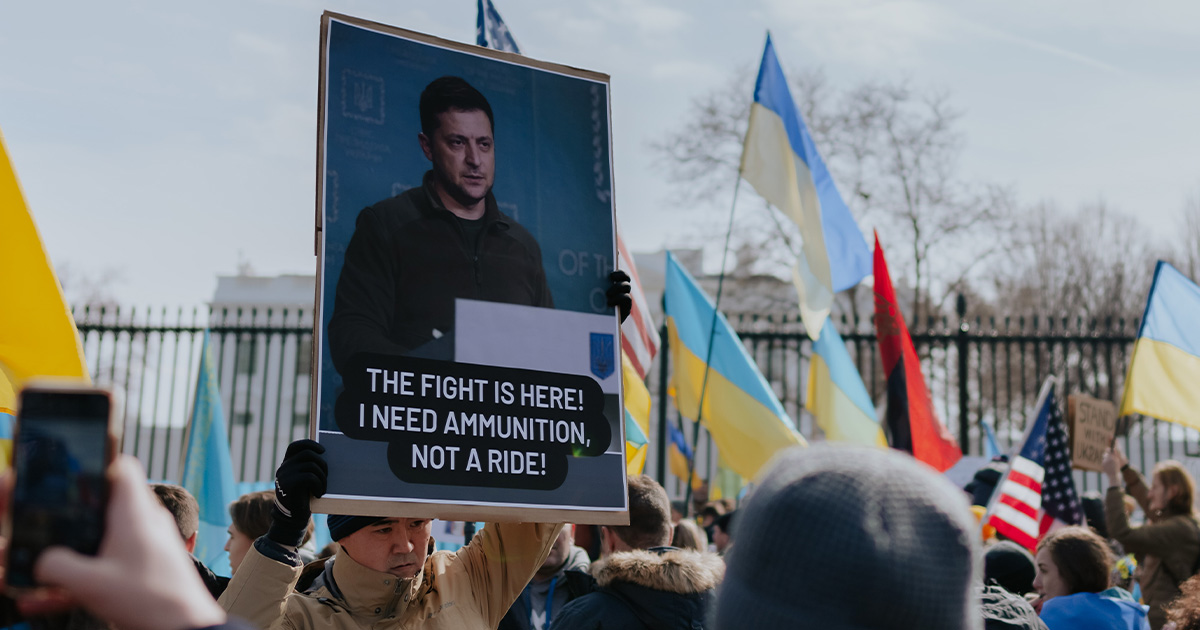 
Masculinity, Bravery, and Volodymyr Zelensky PLUS: Hope and Commercial Surrogacy in Ukraine

Ukrainian President Volodymyr Zelensky is being hailed as a symbol of bravery. Are we starved from masculinity? John and Maria discuss.

John and Maria discuss the rise of Ukrainian President Volodymyr Zelensky. They ponder why the world seems to admire his leadership and what the significance is when the wider culture largely rejects many displays of masculinity.

Then, Maria asks John to explain a recent commentary that highlights beauty in the face of the conflict in Ukraine. Sharing about the weight of redemption, John notes that redemption grounds many issues in the world and expounds on the Wilberforce Weekend theme “Life Redeemed.”

To close, John describes a recent commentary at BreakPoint on assisted reproduction. Maria shares some of the feedback often received on commentaries about this topic, identifying some challenges to questions for BreakPoint.

Zelensky to US lawmakers: ‘We need you right now’ as he invokes Pearl Harbor and 9/11

Ukrainian President Volodymyr Zelensky appealed to Congress for help on Wednesday in a historic speech, telling US lawmakers “we need you right now” as he invoked tragedies in American history like the attack on Pearl Harbor and the September 11 terrorist attack.

To examine Zelensky’s kind of manliness than by looking at Aristotle’s hierarchy of moral virtues in the Nicomachean Ethics, one of the most famous ancient guides to the nature of a noble character. Aristotle understands the virtues as ascending from the baseline traits of bodily self-control and courage, through more refined characteristics such as moderation and liberality—which require the exercise of discriminating judgment—and reaching their peak in greatness of soul or pride.

In his book Life With a Capital L, author Matt Heard (also a speakers at this year’s Wilberforce Weekend) describes a famous oil painting by Russian artist Nikolai Yaroshenko.

“Five diverse prisoners—a soldier, a worker, a peasant, a mother and a child—are huddled together, peering through the barred window of a halted prison railcar. The child reaches through the steel bars, feeding pigeons on the railway platform. Even in the midst of an awful predicament, the five prisoners were making a choice to engage with something. With what?”

“Yaroshenko’s title gave me the clue, There Is Life Everywhere.”

At this Christian Worldview conference, we will explore what it means to live a redeemed life in this cultural moment – when it seems so much is broken. Learn from dozens of inspiring speakers, hear personal stories of hope, and join insightful panel discussions with Q&A opportunities.

Redemption Even in War

In the utter darkness of wartime, such as we’re now witnessing in Ukraine, we wonder why a good God would allow such evil. Stories like this, of families transcending national, political, ethnic, and generational lines to sacrificially love others, remind us to thank God for allowing such beauty in the world.

We Need to Talk About Assisted Reproduction

For example, much of the demand for both international commercial surrogacy and for legalizing commercial surrogacy in the United States is now coming from same-sex couples who, having chosen a sterile relationship, demand the right to have children. There’s also been a number of social adjustments made in order to reimagine reproduction and family life, such as changing the legal definition of the word “parent.”

Surrogacy in the Time of War

Ukraine has become “an international surrogacy hub.” Prospective parents from the U.S., China, Germany, Australia, and other countries have rushed to take advantage of Ukraine’s lax surrogacy laws, hiring less-wealthy women there to gestate their children.