The Magna Carta of Humanity - Breakpoint
Give today to learn what it means to be a thoughtful Christian!
Skip to content 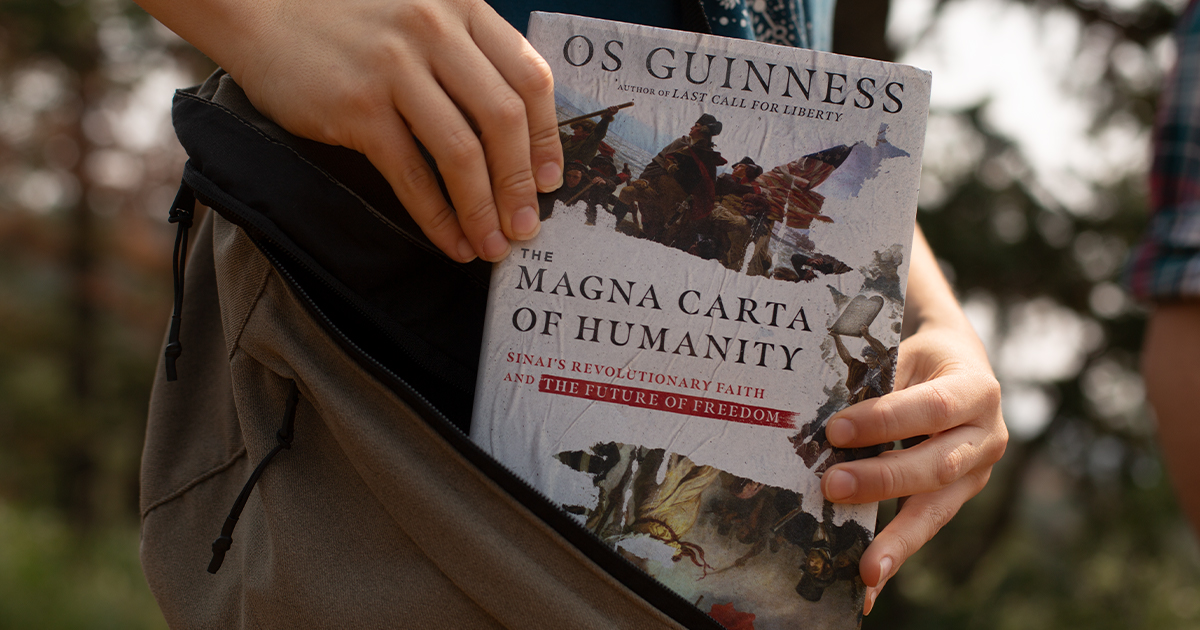 
The Magna Carta of Humanity

A Book Written for this Time and Place

At the Colson Center we’re always trying to point you to resources, not only from us but from our friends who offer a Christian worldview perspective and hope for living in our cultural moment.

There’s a reason that a lot of these resources are written by my friend Os Guinness. Os is a gift to the Christian community. He helps us think deeply about things that matter and presents them in a way that is understandable.

Os’s latest book, “The Magna Carta of Humanity: Sinai’s Revolutionary Faith and the Future of Freedom” is another must-read. Christians today are increasingly feeling the pressure of living in a cultural moment that champions freedom, but means something completely different by the word. It’s always a freedom from any sort of restraint; not a freedom for who we are, who we were made to be, and what it means to live together.

Os Guinness’s book describes a choice that’s in front of humanity right now. Below is an excerpt of a Os’s presentation on his new book:

For anyone who’s thinking deeply, we’re in an extraordinary civilizational moment. The West, which has dominated the world for 500 years, is in evident decline. The United States, which is the world’s lead society, is suffering the greatest crisis in its history since the Civil War. The Christian church, which has been the single strongest influence in the West, is plagued with scandals and divisions and confusion and lack of confidence. There’s no question that America is as deeply divided at any moment since the Civil War, but why?

Some blame the social media. Some the former president. To some, it’s the coastals against the heartlanders; some, the nationalists and populists over against the globalists. But what I’m arguing, and I think the deepest way of looking at it, is there’s a difference between those who understand the republican freedom from the perspective of the American Revolution, and those who understand it from the perspective of the French Revolution and its heirs.

Things like postmodernism, political correctness, tribal politics, identity politics, the sexual revolution, cancel culture, neo-Marxism, all of these have come down from the heirs of the French Revolution, and they are an entirely different revolution and a type of revolution that has never succeeded and that has always ended in oppression.

So, my book shows the differences between, say, their sources: one, the Bible, the other, the French Enlightenment. Their views of humanity: The Bible’s, very realistic with notions like checks and balances, and separation of powers; and the other’s, utopian and very dangerous. And you can see the differences right down to those that are roiling America this year, like critical race theory and different notions of justice. Both sides agree there is injustice, sometimes terrible injustice, but the differences come in how we address them.

As I said, the radical left only leads to oppression and failure and always has. Whereas the Gospel, in addressing these things, puts wrongs right, and after repentance and reconciliation and forgiveness, really leads to restoration so that enemies can be made friends again.

What I’ve tried to write is the deepest analysis of what’s gone wrong today. I have written this book to provide a constructive way forward. Because Sinai, the exodus roots of the American revolution, are what I argue is a magna carta for humanity. It’s time for Christians to get off the back foot and stop being defensive. Our views of freedom, justice, human dignity, words, truth, and many other issues are not only good news,  They are the best news ever.

I want you to have this book. I think it’s incredibly important. And so, for a donation of any amount this month to the Colson Center, I will send you a copy of “The Magna Carta of Humanity,” Os Guinness’s latest book.

This book is important because it drives us towards a deeper understanding of how we got to this time and this place in human history. At the same time, it offers a hopeful way forward, showing us how the Christian worldview is not only true, but good. And it’s good, not only for Christians, but it’s good for the cultural moment.

Go to breakpoint.org/august to make a donation of any amount to the Colson Center, and receive a copy of the book, “The Magna Carta of Humanity,” by the brilliant Os Guinness.

Get The Magna Carta of Humanity by Os Guinness>>