The Retirement Reformation Manifesto - Breakpoint
Help make a bigger worldview possible for Christians around the globe with a year-end gift!
Skip to content 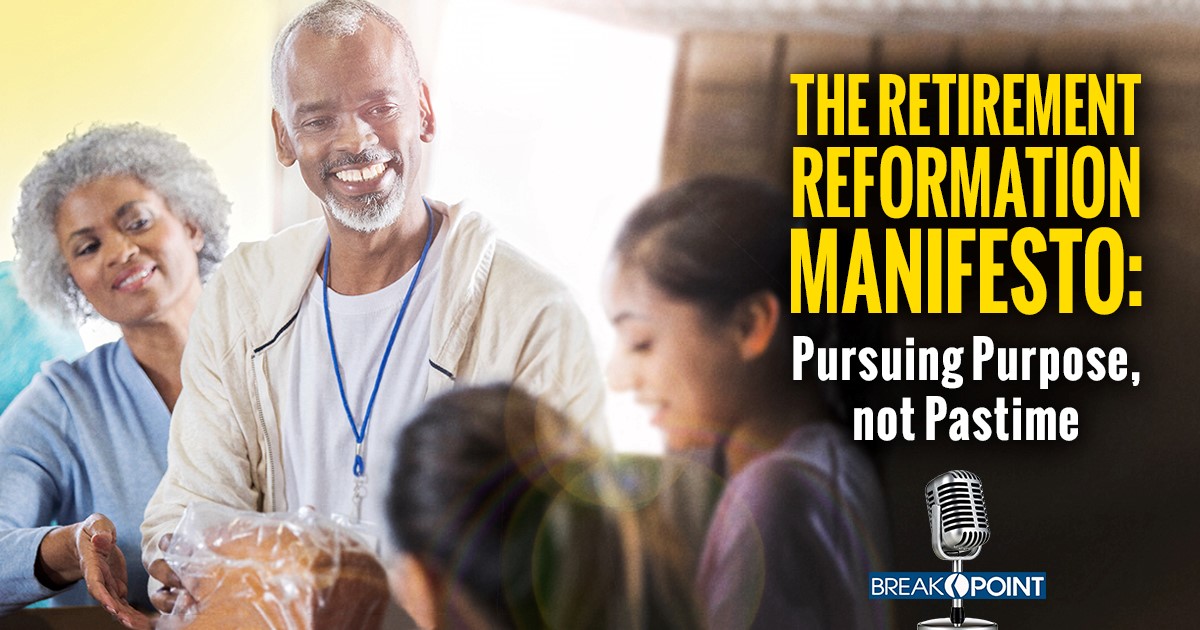 America is getting older. In 1950, near the beginning of the Baby Boom era, the average life expectancy of Americans was 68. Today, it is 79. By the year 2040, one in five Americans will be over the traditional retirement age of 65.

With so many facing life at or beyond retirement age, a new group of Christian leaders based in Colorado Springs is asking us to engage in some non-traditional, but thoroughly biblical, thinking about retirement itself.

This group says that age 65 isn’t the age to retire. It’s an age to re-fire, re-boot, and re-focus on your calling, influence, and ministry. It’s a time to pursue purpose, not pastime.

To focus their commitment, this group has produced a Retirement Reformation Manifesto, which begins: “Reforming retirement requires a reframing of our thinking, allowing us to shine a light into the purposeless retirement void and finding freedom from unending leisure, indulgence, and self-gratification.”

The group is led by Bruce Bruinsma, a 77-year-old entrepreneur and financial planner still active in business. Bruinsma says the Bible teaches that Christians are “called to bear fruit in every season of life.” That’s why the Manifesto aims to inspire “a movement where every Christ follower is confident in God’s plan for a lifetime of faithful service and committed to helping the Body of Christ reform its understanding of retirement.”

Bruinsma said: “As Christians, we are to remain faithful for a lifetime. My hope is that the Retirement Reformation Manifesto will inspire many, many people to believe God still has more for them in their later years.”

According to a statement released by Bruinsma and the other drafters of the document, “the 10-point manifesto challenges signatories to overturn traditional attitudes toward senior years as merely a time of relaxation and leisure. Instead, they are urged to embrace their ‘final quarter’ of life as time to find spiritual fulfillment and meaning in using their life experiences and resources to serve and enrich others.”

Among the commitments those who sign the manifesto make are to:

The topic of retirement is one we care about at the Colson Center, in large part because Chuck Colson himself talked about it often in the last years of his life. He swore he’d never spend his final years “chasing a little white ball around.”  Older Christians, he firmly believed, should be actively pouring their lives into other, younger people who could carry on Kingdom work.

In fact, the Colson Center owes its current vitality in part to Chuck’s belief that Christians should always die with “our boots on.” Chuck modeled that for us when, at 80 years old during The Colson Center’s 2012 Wilberforce Weekend, he collapsed on-stage mid-speech and had to be helped into a waiting ambulance. He died just a few weeks later.

In that speech and in many others, Chuck said that senior-citizen Christians might give up their 9 to 5 jobs, but they should never retire from Kingdom work. Deuteronomy says that teaching our “children and our children’s children” to love and fear the Lord is a part of the Christian’s job description. The Apostle Paul praised Lois, Timothy’s grandmother, for discipling her grandson in the faith.

Bruinsma and the Retirement Reformation team is taking up that message. “We believe that the Retirement Reformation Manifesto has the potential to be history-making,” said Bruinsma. “Imagine what might happen if millions of seniors are inspired and equipped to approach their retirement radically differently, finding meaning and satisfaction through helping extend God’s kingdom, as they pursue purpose rather than just pastimes.”

I can imagine it. Come to BreakPoint.org, click on this commentary, and we’ll link you to the Retirement Reformation Manifesto.