Why Paris Matters: The Moral Imperative of Interested Love - Breakpoint
Give today to learn what it means to be a thoughtful Christian!
Skip to content 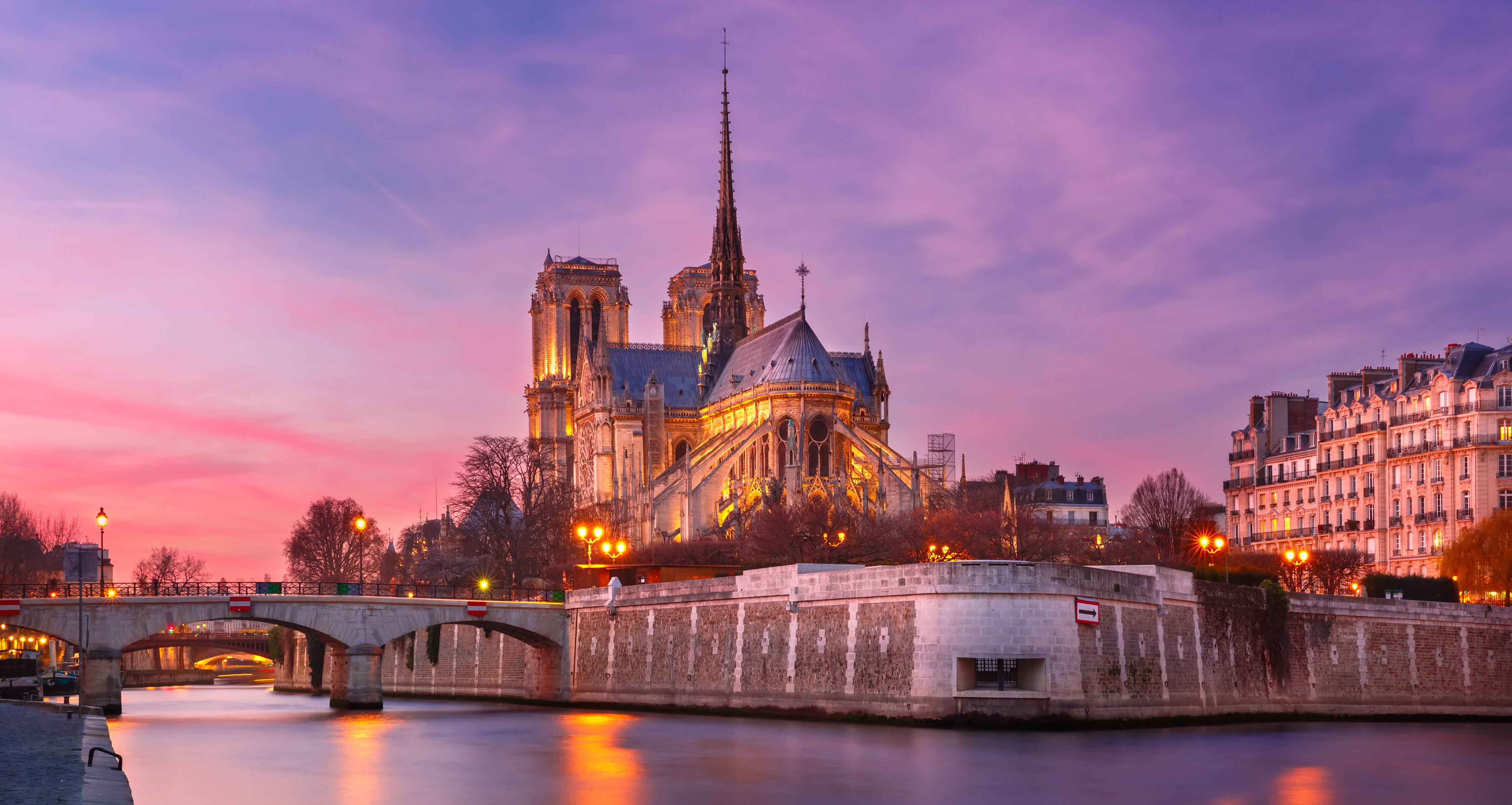 
Why Paris Matters: The Moral Imperative of Interested Love

Whenever tragedy strikes, there is the temptation to guard ourselves about caring too much about a given problem in particular in light of the problems general to the world. There is the desire to see Christian love as disinterested, indiscriminate, and unfocused. The God who made us in His image calls us to love our neighbors, whoever they might be, but as personal beings we manifest this love to the particular people and places where He has called us to live and to love.

Yet again, the world is in mourning for the City of Lights. In past years it has been the specter of terrorism which haunted the French capital and drawn our sympathy. We remember the assault on the Charlie Hebdo offices by radical Islamists who killed 12 in 2015. Then, that same year, over 100 concert-goers were gunned down by ISIS loyalists at the Bataclan Theater. Now, we are faced with the terrifying image of the Cathedral of Notre Dame in flames.

Today we mourn for an icon, a sacred space, a building set aside for the worship of God, a structure occupying a clear place at the center of our imaginations and a literal place as the center of France. While the agent of destruction was, by all accounts, an accident, we find ourselves again weeping for this foreign land. Once again social media has erupted in messages of support, even, and perhaps especially, in the traditionally Franco-phobic US and UK.

We’ve seen one of the most famous buildings in the world go up in an inferno. For a time, we feared that this seemingly eternal structure could disappear forever. There’s something quite unnerving about such a vision. These moments of mortality shake us as they remind us that there’s nothing so solid that it cannot be undone at a moment’s notice.

But, even in the midst of these shadows, there are moments of light, times when our common humanity shines in the darkness and reminds us that as real as sin might be, the imprint of the divine image we bear reveals itself. We’ve seen our culture’s perpetual gripe fest pause for a moment of shared sadness. We’ve seen billionaires shell out hundreds of millions for restoring this global treasure. We’ve heard the singing of Parisians in grief and hope for their fair city.

There is a beauty in this kind of grief. It’s a recognition that there’s something not right with the world, and that there are some moments that epitomize this wrongness more than others. It’s the awareness that some moments, some people, some monuments, stand out in our imaginations more than others. It’s hardly as though there’s anything fundamentally sacred about this one particular collection of stone, wood, and glass . . . and yet.

And yet, there is something special here. There’s something that afflicts us in our souls about this tragedy in a way that wasn’t present when any number of other buildings undoubtedly burnt the very same day while unmourned by the world. Why do we care about this fire more than we do about another? Why do we care more about this fire in Paris than we do about that fire in Jerusalem or these others of late in Louisiana?

As of the time of this writing, nobody’s saying that we shouldn’t mourn Notre Dame, but I fear they’ll find a way. So far, as with the death of a prominent person, the world is so much in its grief that the principle of De mortuis nil nisi bonum is still in effect. It won’t last.

Given the speed of the social media outrage complex, it won’t be long before someone comes along and declares our societal guilt, telling us that we’re all wrong to feel so bad. One day soon, if they’ve not done it already, someone will proclaim that our grief over Notre Dame is a sign of our bias, and, until we perform the rites of contrition, we stand accused. The grief-crippling logic is that until we weep for all with equal fervor, we have no right to mourn for any.

On the surface, this almost sounds reasonable. If all crimes are violations of God’s Shalom, then we shouldn’t care whether they happen across the street or across the world. If all human beings are made in the Image of God, then the death of one is as much a heartache as the death of another. If all works of human creation are reflections of our shared Imago Dei, then we shouldn’t discriminate by weeping less for the loss of a tumble-down shack or postmodern high-rise than we do for the Notre Dame.

Part of us wants to assent to this line of reasoning. We want to say that we should care about all sadness to the same degree. It seems somehow more human, more loving, more Christian. But, we can’t do it, can we? We may go in for that in theory when we’re sitting around having a discussion, but have you ever managed to care about strangers as much as you do loved ones? Not only is it not our practice, but we have the sneaking suspicion that this supposed bias has some pretty solid principles behind it.

Despite what the false piety of emotional equality would counsel, in light the terrible fire, there is good reason today to cry, “Vive la France!” We care more about Notre Dame than other things for the same reason we are more shaken by a loved one’s death than we are by the loss of a complete stranger or casual acquaintance. Crying over a friend’s death doesn’t mean that we think the stranger’s life didn’t matter. The stranger was just as much made in God’s image as our friend, but the personal connection we have with our friend leaves a gaping hole in our hearts while the stranger’s tragedy brings us only a sympathetic sigh.

Notre Dame is not France, but, like the Eiffel Tower or the Arc de triomphe, it symbolizes our Gallic friends. As much as we in our Americanness disdain symbols and want to “get real,” there’s something potent in them. There’s a reason we hold onto keepsakes and souvenirs of past joys, a reason we revisit old haunts of childhood and youth, a reason we keep that old mug on the shelf despite its nicks and chips. These things represent in a powerfully emotional way the deep and abiding connection we have for the particular things in our lives. Notre Dame plays the same role as symbolizing the affection many of us have for France and, in turn, all that France represents for us.

Despite our familial squabbles, France remains, indeed, family. France stood shoulder to shoulder with the United States and Britain against German Fascists and Russian Communists throughout the 1900s. We don’t always agree with those “cheese eating surrender monkeys,” but they have been a beacon and inspiration for human dignity and liberty since the end of the 1700s. Like anyone else, their witness for freedom has been flickering at times, but French writers and thinkers have been the source of many great movements around the world for the general welfare of humanity as a whole. A tragedy in France is symbolically a tragedy for the liberty, equality, and fraternity of us all.

For Americans and those in the West in general, France is no stranger. We cannot keep their pains at an arm’s length the way we do with others. We are forced to see in their pain the horror which could just as easily be ours. We share a culture heritage and mythic imagination with them in a way that we do not with much of the rest the world. When we see this tragedy in Paris, we see the sadness in some way as our own. Our personal connection to the people of France and to this monument in particular means that our hearts broke more than a little as we watched the flames lick the walls of Notre Dame.

Should we remember the death and destruction elsewhere? That such pains are unwelcome and all too common visitors to those outside the Shire of the West? By all means! We should all work to make ourselves more aware of the indignities which are tragically ordinary in our supposedly progressive age. The world is still with darkness filled, and the pain of God’s image bearers does not change by its association with us. Their deaths matter, their tragedies matter. But, please, let us have no shaming of others for their pain for this shadow of darkness in the City of Lights. We take this tragedy personally because the people affected by it matter to us personally. Our love of loved ones is not hatred of others.

We are personal beings who have emotional attachments to everything our lives touch. To ask people to mourn for every sad thing in the same way does not increase our humanity. It demeans it. I’m sure that your kids are great, but there’s no way I can or even should love them as much as I do my own. If I were to tell you that I don’t care for my wife or children any more than a complete stranger, you’d hardly compliment me on my great love for all humanity. In fact, you would wonder what kind of person could say such a thing!

We are not machines which mechanically offer to others a sensation called “love.” We are not mental cogs in some grandly cold philosophical system granting indiscriminate affection. We are persons with personal connections to the world around us. We don’t live our lives in a state of pseudo-Kantian disinterest where all objects, events, and people are monotonously equal in our estimation. We are bound to particular places and human beings in a way we aren’t to others, and we feel the pain of those special to us more than that of others.

This is no weakness of our finite hearts. Even less so is it a sinful artifact of our fallen natures. The same image of God that leads us to see the dignity and worth of the lives and sufferings of every human being as ultimately equal also entails a personal-ness to the way we relate to those ultimately equal people. We care about things in particular because we are made in the image of a God who cares about things in particular.

The parable of the Good Samaritan pushes us to see the worth of those we’d not think to consider in a neighborly manner, but it also entails that we love the people of flesh and blood in front of us rather than “The People” as a concept. If we try to love humanity as a whole rather than humans in particular, we’ll end up doing just that: loving no one in particular.