Fighting Assisted Suicide, Jersey Style - Breakpoint
Give today to learn what it means to be a thoughtful Christian!
Skip to content 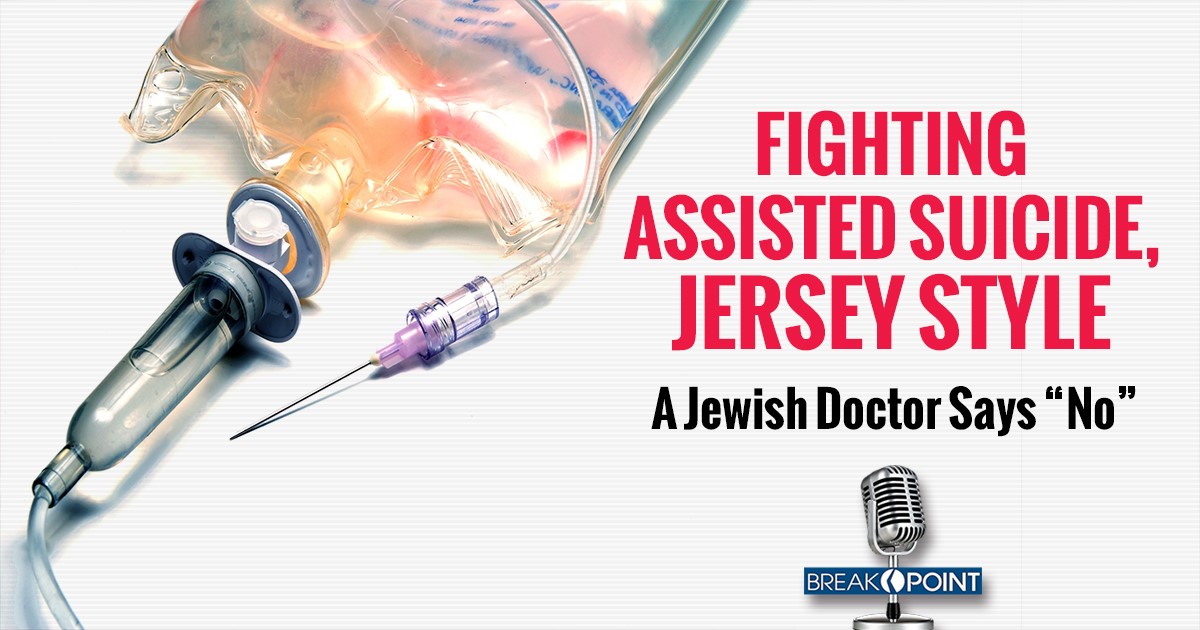 New Jersey is the ninth state to legalize physician-assisted suicide. According to the state’s Medical Aid in Dying for the Terminally Ill Act, attending physicians can “write a prescription for medication that would enable a qualified terminally ill patient to end his or her life.”

The Act defines “terminally ill” as “the terminal stage of an irreversibly fatal illness, disease, or condition with … a life expectancy of six months or less.”  Only the “physician who has primary responsibility for the care of a patient and treatment of a patient’s terminal disease,” may write the life-ending prescription.

So, while it would be far worse for New Jersey to coerce doctors to kill against their conscience, does honoring a patient’s request and making a referral mean one is still complicit in his or her death? Or, to put it differently, is the law still forcing physicians who want nothing to do with physician-assisted suicide to participate?

That is the opinion of Dr. Yosef P. Glassman. He recently filed suit to block implementation of the Act because he believes that being forced to refer patients to doctors who will kill them violates his religious beliefs. Dr. Glassman is particularly well-qualified to hold forth on his beliefs. Not only is he a physician specializing in the care of the elderly, he is also an Orthodox Rabbi.

Glassman told the Jewish Link that he “was motivated to act by the chilling prospect of being a part of the suicide process, which strongly conflicted with both my professional and religious values.”

After talking with several concerned Jewish community members on the topic, Glassman decided his work in geriatrics left him no choice but “to take a firm position.”

“Some people who may oppose my action,” Glassman says, “may say that I want dying patients to suffer, chas v’shalom. Quite the opposite—we as physicians have ample tools to alleviate the suffering for the living, even for the terminally ill, without the need to license suicide.”

That Hebrew phrase he used, chas v’shalom, means “Heaven forbid.” It reveals that just as Dr. Glassman is religiously motivated not to kill, he’s also religiously motivated to heal and to alleviate suffering. In his mind, being forced to kill not only forces him to do what is wrong, it’s an obstacle to doing what he’s called to do.

The good news is that a New Jersey state judge has issued an order preventing the law from taking effect until the religious freedom issues Glassman raised have been adjudicated.

Still, Glassman’s case is a reminder of the increasing pressure being put on medical professionals to participate in the “Culture of Death.” No matter how often advocates paint physician-assisted suicide and abortion as “compassionate” care, many doctors rightfully want nothing to do with them.

This leaves the dilemma of to what degree unwilling physicians should be coerced to participate. Even if laws talk about “voluntary” participation, it’s nearly impossible to avoid the machinery of death once it carries the force of law.

Thankfully, physicians like Glassman are ethically coherent and willing to resist, and Jewish organizations like Agudath Israel are monitoring new laws like the one in New Jersey and are willing to help people like Dr. Glassman not violate their faith.

More than a few Christian pastors could learn from the moral clarity of Dr. Glassman and the advocacy of Agudath Israel. No Christian should be coerced to participate in the culture of death. And no Christian who refuses to participate should find themselves alone in their courage. Chas v’shalom that Christians should be any less determined to fight against this “Culture of Death.”