God in the Space Between the Stars - Breakpoint
Give today to learn what it means to be a thoughtful Christian!
Skip to content 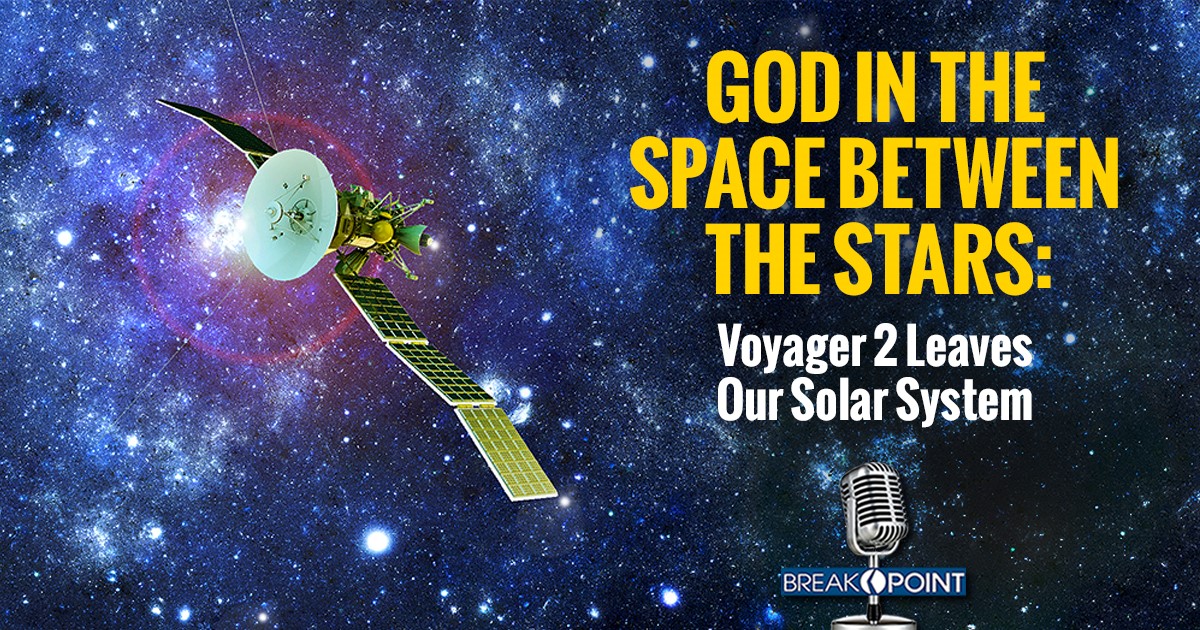 
God in the Space Between the Stars

If you want to feel small, just imagine moving at 34 thousand miles per hour for forty years and getting—astronomically speaking—nowhere.

Late last year, the Voyager 2 space probe became the second craft to ever leave our solar system. Now 11 billion miles from earth, it is one of the farthest-flung man-made objects in existence. And it was launched in 1977.

Because there are different ways of defining the solar system, we should be precise. The American Geophysical Union in Washington reports that Voyager 2’s sensors recently detected a sudden dip in radiation and magnetism, which marks the boundary of what astronomers call the “heliosphere,” our sun’s protective bubble of particles and magnetism.

In other words, the probe is now beyond our star’s most significant influences and is hurtling into interstellar space—literally “the space between the stars”—at 34 thousand miles per hour.

Its departure from the heliosphere is big news because, unlike its twin, Voyager 1, Voyager 2 is still transmitting data back to us here on earth, providing “first-of-its-kind” observations of the nature of this unexplored space.

Voyager 2 was originally designed to observe the gas giants Jupiter, Saturn, Uranus, and Neptune—a mission it completed back in 1989. But scientists now think the aging probe might hold together as late as 2027, depending on how long its plutonium fuel source provides power.

The accomplishment of both Voyager probes is unparalleled. Still, astronomically speaking, they’ve only just stepped outside our front door, and barely entered the larger stellar neighborhood. It will take Voyager 2 another 40 thousand years to approach the nearest star to our sun—which together occupy only a fraction of the Orion Arm of the Milky Way galaxy. The Milky Way, in turn, is just one of at least 100 billion galaxies in the visible universe.

In the distant reaches of space, there are stars so much bigger than our sun they defy description. The longtime record-holder for largest known star is VY Canis Majoris, a red hypergiant over two thousand times the size of our sun.

To give you an idea of the scale we’re talking about, if VY Canis Majoris replaced our sun, it would engulf most of the inner planets of the solar system, including Earth.

Voyager 2’s journey is a constant reminder to us of the enormity of the universe. I don’t know about you, but the distances and objects visible in the night sky make me dizzy; they confront me with the realization of how little I seem to matter by comparison… which is exactly the reaction God wanted us to have.

Our own wonder ought to echo the Psalmist, who sang: “When I look at your heavens, the work of your fingers, the moon and the stars, which you have set in place, what is man that you are mindful of him, and the son of man that you care for him?”

God—the Creator of VY Canis Majoris—answered that question, but not ultimately in words. Instead, He came to dwell with His people, first through the Ark in the Tabernacle, and ultimately in the Incarnation of Jesus Christ.

Though it boggles the mind, the maker of the Milky Way chose this little planet to reveal Himself most fully and personally. By doing this, He bridged a gulf that makes the space between our stars seem small—the separation between an infinitely holy God and sinners like us who are doomed to death.

Against this backdrop of our cosmic insignificance, we can better appreciate God’s love—which He demonstrated by (as Eugene Peterson once put it) “coming to our neighborhood.” Thank God, since we can’t even build a probe able to leave our interstellar neighborhood.

And before I close, don’t forget that the Colson Center is offering a one-year subscription to WORLD Magazine, an outstanding Christian news source, with your next donation to the Colson Center. Check it out at BreakPoint.org.