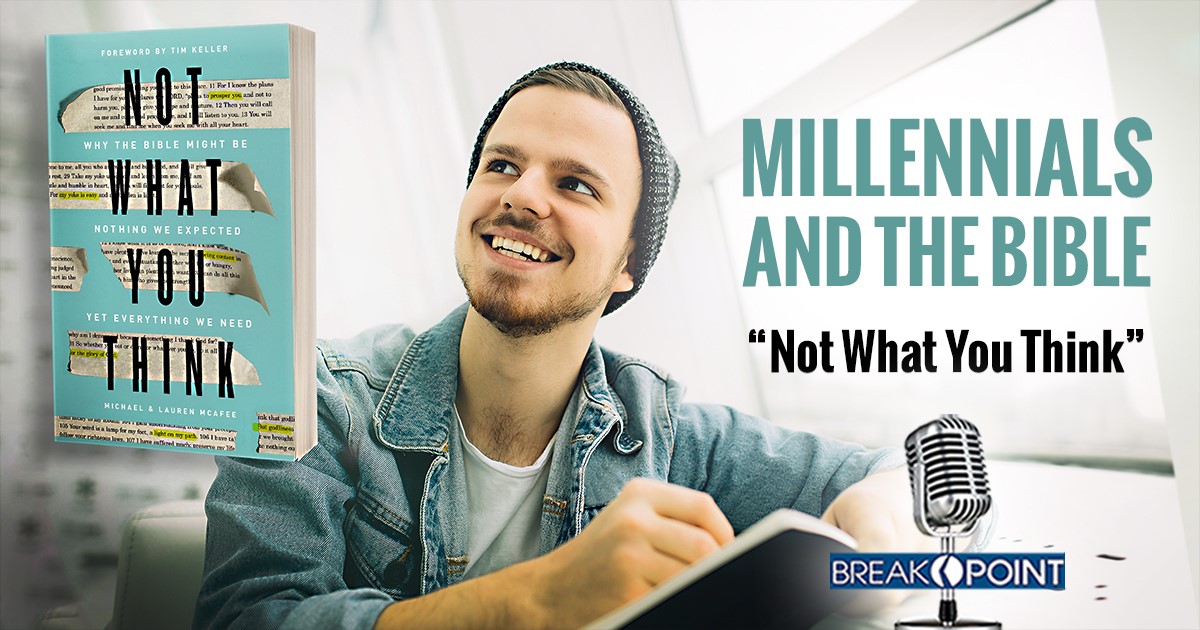 
Millennials and the Bible

There’s so much talk these days about so-called “Millennials.” Millennials are the generation born between 1980 and 2000. They are “digital natives,” and the defining events of their lives include the Oklahoma City bombing, 9/11, the War on Terror, Harry Potter, the Great Recession, and the birth of social media. Oh, and by the way, they love avocado toast.

They are also the “biggest” generation: Some 78 million strong. In the next five or six years, they will comprise 75 percent of the American workforce.

All of this leads to an acute challenge for many in older generations: How to pass on the faith to their children and grandchildren. I’m happy to tell you there’s a new book that can really help.

Two Millennial Christian thought leaders, Michael and Lauren Green McAfee, seeking to overcome the skepticism of their peers about the Bible, have written a new and engaging book, “Not What You Think: Why the Bible Might Be Nothing We Expected but Everything We Need.”

Michael is director of community initiatives at the Museum of the Bible. His wife Lauren, who now works at the Hobby Lobby corporate offices, helped get the museum up and running. So they both have a deep, sincere passion to share their love for the Bible.

The first part of “Not What You Think” is devoted to explaining exactly who Millennials are: their demographics, aspirations, preferences, etc. One of the key characteristics we must understand is that Millennials came of age at a time when the very notion of truth was, well, fuzzy at best.

“Our era is one in which truth has moved from objective reality to personal response,” they write. “Our generation generally hesitates to accept truth outside of personal experience and opinion.”

This is the first huge obstacle for approaching Millennials with traditional Christian apologetics, which depends on the absolute and objective Truth claims revealed in the Bible.  And yet, this is where these millennial authors succeed as they invite their fellow Millennials to engage Scripture. While being upfront and honest about the truth claims of the Bible, they make the case that the Old and New Testaments, unlike other religious holy books and texts, are not primarily a set of rules. Instead, they present a grand Story woven together by God through various authors over a millennium and a half. It’s a story that God invites us all to join.

Throughout their book, the McAfees argue convincingly—and in detail—that both Testaments, from Genesis through Revelation, point to the God-Man, Jesus. Thus, the Bible not only invites us into God’s cosmic drama, it invites us into a relationship with the Creator of the universe.

“What if,” they write, “truth is not just a point of view . . . not just a list of rules—yours, ours, or anyone else’s? What if truth is not the ever-changing consensus of the crowd but instead is a person whom you get to know and who knows you. This person’s story is told in the Bible. His name is Jesus.”

This is exactly the kind of book that will not only help you communicate the importance of Scripture to younger generations, it’s a book you can actually give to younger generations. And, it’s a great resource for Sunday School classes and small groups to learn more about the “biggest” generation, while also learning about how to better reach them.

During the month of August, we will send you a copy of Michael and Laura Green McAfee’s outstanding book, “Not What You Think: Why the Bible Might Be Nothing We Expected but Everything We Need” with your next donation to BreakPoint and the Colson Center.