The Faith of Mariano Rivera - Breakpoint
What makes the Church essential? Click here to learn more.
Skip to content 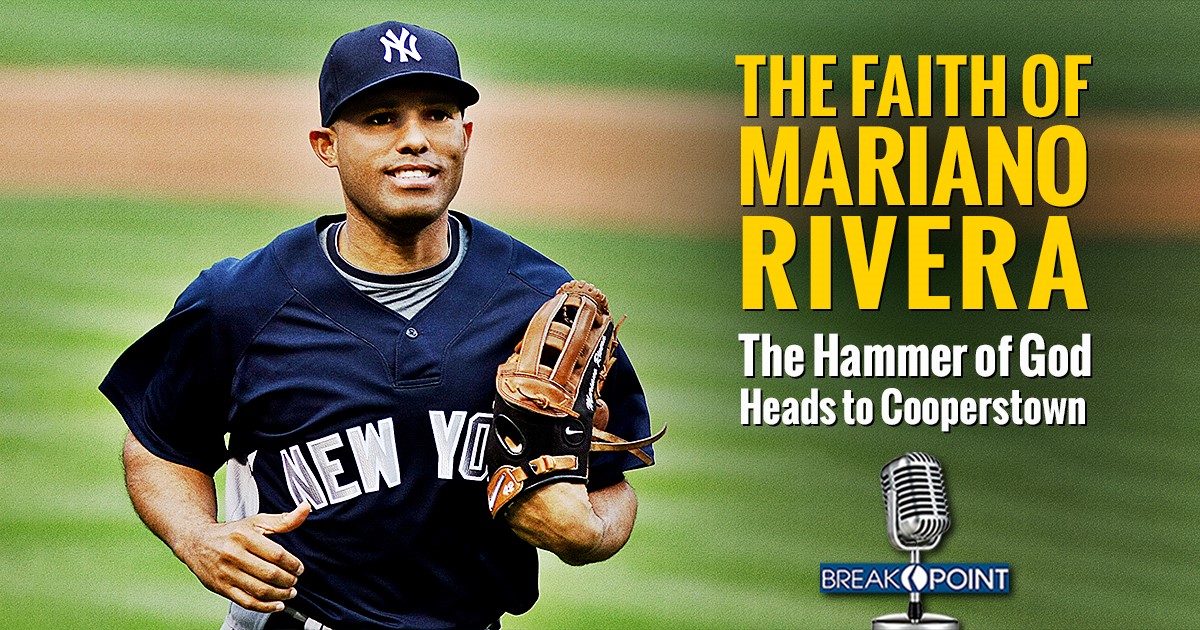 
The Faith of Mariano Rivera

Since 1936, 323 players, managers, executives and umpires have been elected to the Baseball Hall of Fame in Cooperstown, New York. What they all have in common is that none of them, not even Babe Ruth, Willie Mays, or Joe DiMaggio, were elected unanimously.

On Tuesday, that changed. Pitcher Mariano Rivera of the New York Yankees became the first player elected unanimously to the Baseball Hall of Fame. It’s a fitting tribute to the man Esquire magazine dubbed “the Hammer of God,” for his achievements on the mound.

Now even if you don’t like baseball, you should rejoice with Rivera and his family, because while he may have been God’s “hammer” on the field, he was and remains God’s faithful servant both on and off it.

Rivera was what is known as a “closer.” That means he pitches exclusively in those high-pressure situations when the game’s on the line. He’s expected to “close” the door on the other team. It might sound simple, but any baseball fan will tell you few pitchers, even the most talented ones, can stand up to that kind of pressure for very long.

Rivera did it for seventeen seasons. According to Tim Kurkjian of ESPN, the gap between Rivera and whomever is the second-best closer of all-time is greater than the gap at any other position in baseball history.

That’s part of the reason one former player called Rivera “the most beloved Yankee,” which, given the franchise’s storied history, is saying a lot.

But it’s not the only reason. The other part is Mariano Rivera the man. The Esquire profile said that “He is modest and mild. He is neat and quiet, while other closers are not.” He is regarded as the ultimate “team first” player who summed up his job as “I get the ball, I throw the ball, and then I take a shower.”

Throughout his career, Rivera was as well known for his Christian faith as for his legendary “cut fastball,” which was virtually unhittable even though hitters knew it was coming.

In fact, Rivera will tell you that his faith and his fastball are linked. He claims God gave him the pitch. In his own words, “I do not spend years searching for this pitch. I do not ask for it, or pray for it. All of a sudden it is there, a devastating baseball weapon.”

As “devastating” as that weapon was during the regular season, it was even more so during the playoffs. In sixteen post-seasons, Rivera allowed fewer earned runs than the number of men who have walked on the moon.

Yet he expressed thanks to God for his most high-profile failure, too. In the 2001 World Series, he gave up the run that cost the Yankees the series, but he pointed out that if the Yankees had won, his teammate Enrique Wilson would have been on a flight that ended up crashing and killing everyone on board. Since they didn’t win, Wilson took an earlier flight. “I am glad we lost the World Series,” Rivera said, “because it means that I still have a friend.”

There’s a lot more I could tell you: from the glove inscribed with Phillipians 4:13 to his many charitable endeavors. Then there’s the documentary, “Being: Mariano Rivera,” about his last season that aired on Showtime. In many ways, it was one long testimony to his Christian faith.

In an era where the word “hero” is either tossed around haphazardly, debased, or made to seem hopelessly out-of-date, the real deal has received the honor he was due, honor he will undoubtedly ascribe to his God.