BreakPoint: Where Have All the Women Gone? - Breakpoint
What makes the Church essential? Click here to learn more.
Skip to content 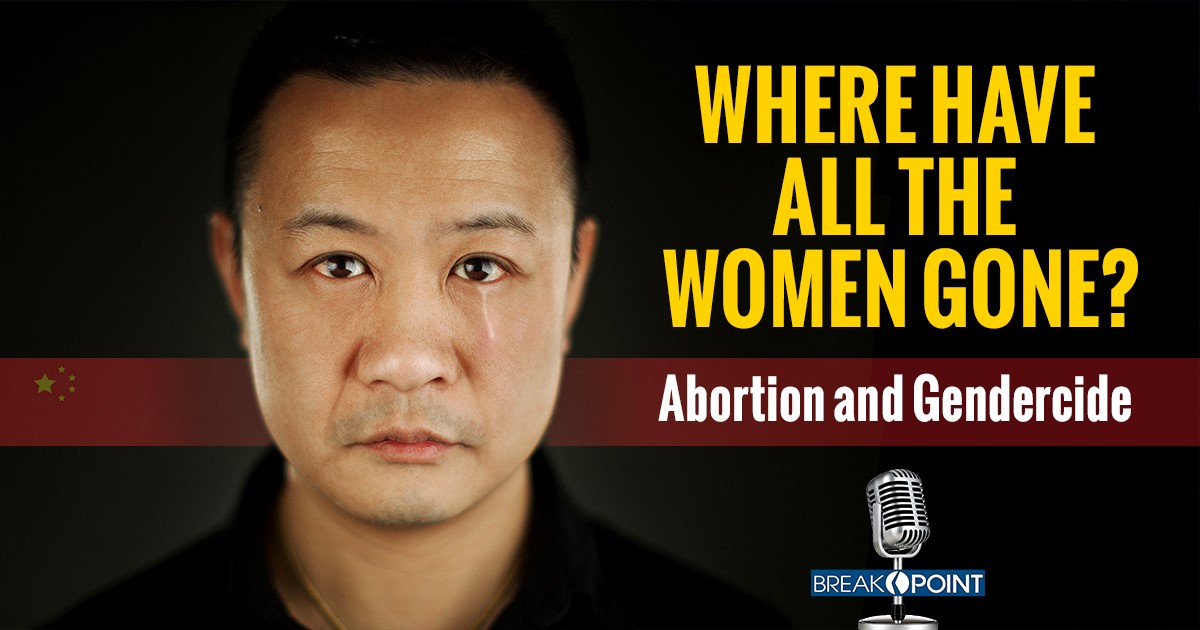 
BreakPoint: Where Have All the Women Gone?

Nearly thirty years ago, Nobel Laureate Amartya Sen wrote an essay in the New York Review of Books entitled “More than 100 Million Women are Missing.” Sen didn’t mean “missing” as in “missing person.” He meant that in places like China and his native India there were more than 100 million fewer women than demographic trends suggested there should be. Two decades later, journalist Mara Hvistendahl wrote “Unnatural Selection: Choosing Boys over Girls and the Consequences of a World Full of Men.” By the time of the book’s publication, the estimate of missing women had grown to 160 million. The “elephant in the room” behind this terrible trend is abortion. Demographers and other researchers first thought that the explanation must be that female infanticide—you know, the kind practiced in the ancient world—had somehow made a comeback. Instead, they discovered that female children were being identified in utero, via amniocentesis or ultrasound, and then they were aborted. The combination of technology, preference for male children, government policies such as China’s infamous “One-Child Policy,” and legalized abortion had altered demographics from China to Albania. Still, researchers downplayed this connection between abortion and the 100-million plus missing women. Hvistendahl, for example, placed far more emphasis on cultural attitudes and discrimination against women. While these factors certainly play a role in the gender imbalance, without easy access to abortion this problem wouldn’t exist, at least not in its present form. A recent study published in the Proceedings of the National Academy of Sciences makes the connection between abortion and gender imbalance more explicit. Researchers from Britain concluded that between 1970 and 2017, “sex-selective abortions resulted in about 23.1 million missing baby girls.” According to a demographer from the American Enterprise Institute, that number “seems a bit low.” In China and India alone, men outnumber women by 70 million. The Chinese Academy of Social Sciences has estimated that by next year, 24 million Chinese men of marriageable age will be unable to find a spouse. Since mortality rates are much higher for men than women, either Chinese and Indian women are exceptionally unlucky, or, as is more likely, the lion’s share of that 70-plus million represents women who were killed as the result of sex-selection abortion. That’s why both China and India have done what the U. S. has not: outlaw sex-selection abortion. While their laws are honored more in the breach than in the observance, at least China and India have acknowledged the problem. The cultural preference for boys and systemic discrimination against girls is nothing new. But the radical gender imbalance in places like China and India is. Not coincidentally, that imbalance emerged just as abortion became readily available in the 1970s. To put it bluntly, legal abortion made it easier to eliminate unwanted daughters. To put it even more bluntly, gendercide isn’t the result of people having abortions for the “wrong reason”—it’s the result of abortion itself. And though a sexist act of violence halfway around the world should be just as intolerable to us as if it were happening in our own backyard, make no mistake. Elective abortion leads to sex-selective abortion. It is happening in America, too. Of course, getting abortion-rights advocates to acknowledge this is like trying to swim against the current of the Ganges from the Bay of Bengal to its source in the Himalayas. Good luck with that. Still, the savage truth is hundreds of millions of missing women is the price we’ve paid for legalized abortion. It’s the elephant in the room, and it isn’t going anywhere.       Download mp3 audio here.