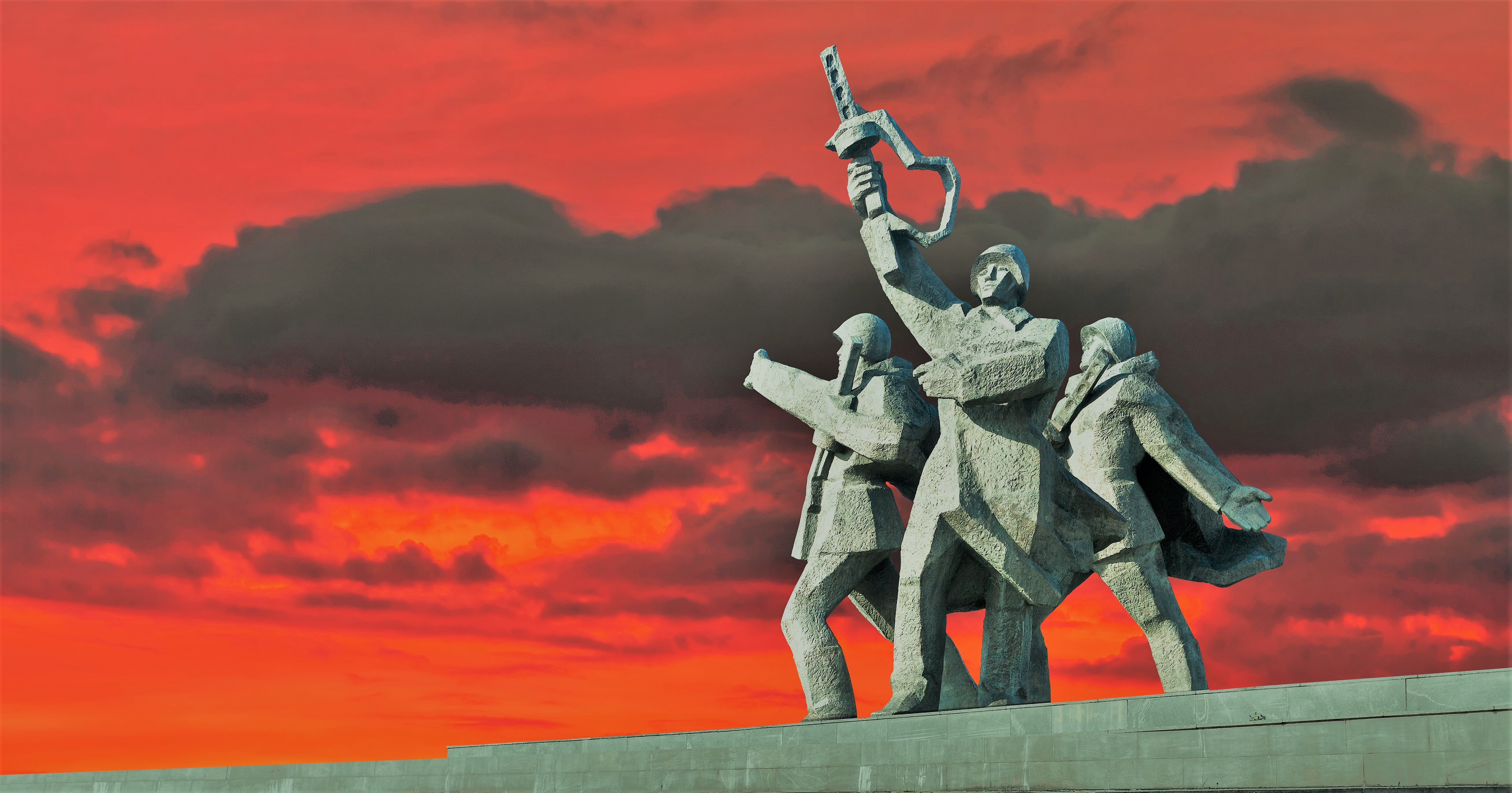 In the lead-up to the 75th anniversary of famous D-Day landings in Normandy, world leaders heaped praise upon the soldiers, sailors, and airmen who, by their courage and sacrifice, quite literally saved the world. It’s hard not to join in with this adulation. Despite several years of victorious campaigns in the Atlantic and Mediterranean, the task of sending 150,000 men across the English Channel in the face of the Wehrmacht was no walk in the park.

Securing an Anglo-American beachhead in France meant relieving pressure on the Eastern Front and placing a lethal, mechanized army within reach of the Rhine. Hitler’s regime was doomed, even if he couldn’t bear to admit it. Considering the moral ambiguity of some historical events, it is a relief to recall a moment with ethical clarity.

As strange as it might seem, not everyone was pleased with these remembrances. No, it wasn’t the Germans, who, if anyone, had good cause to look back on 1944 with sadness rather than joy. In fact, somewhat incongruously, the German Chancellor took part in the festivities. Who, then, could have it in their hearts to besmirch this great Allied victory? One of the Allies, it turns out.

Russian Foreign Minister Sergey Lavrov went on a bit of a tirade against D-Day memorials. He denigrated the efforts of the Western Allies in Normandy, noting that this battle took place less than a year before the end of the six-year-long war. The focus on this invasion was, in his mind, a deliberate attempt to deny to the Russian people their rightful claim as the true victors over Nazism. “It was the peoples of the Soviet Union who broke the backbone of the Third Reich. That is a fact.” Apparently, Moscow’s myopia means that an incredibly complex, dangerous, and effective military campaign isn’t worth remembering.

This may be rather odd to us, but part of this is reasonable. From the Russian point of view, while the Anglo-Saxons sat safely behind their oceanic barriers, the Soviet people endured great hardship. Their cities were besieged, occupied, and destroyed. The fatalities among British Imperial and American forces were less than 1 million, but those from the USSR exceeded 20 million. English-speaking POWs in Germany could expect harsh treatment, but were not treated as sub-humans, as their Slavic counterparts were.

Then again, part of this is just Russians being Russian. As anyone who’s had a conversation with a loyal son of the Motherland can tell you, everything good that’s happened in the world has, apparently, come from Russia. Several years ago, I was chatting with a Russian co-worker who was going on and on about how much better Russian planes, tanks, spies, etc. were than their American counterparts. When I had the temerity to point out that they’d lost the Cold War and that there were now American troops near Kiev but no Russians around Tijuana, he only begrudgingly admitted this truth.

Here’s the thing. While it is patently ridiculous for the Russian emissary to belittle D-Day, they’re not crazy to imagine that the Western powers tend to give short shrift to their one-time ally to the east. Their immediate switch from Second World War friend to Cold War enemy meant that certain facts were not emphasized in the West. Three-fourths of the German combatants killed from 1941-1945 died at the hands of a Soviet soldier, and the USSR “wins” the deadly contest of most deaths in the conflict. The skill of Russian generals like Zhukov and the dauntless courage of regular soldiers in the Red Army were of inestimable value in eliminating the Nazi threat. A neutral or defeated Russia would have made an Allied victory difficult if not impossible.

But that’s not the whole story. Our Slavic friends may be quick to remember the drive across Poland to Berlin in 1944 and 1945, but they kind of skip over the fact that they’d also moved into Poland in 1939, but that time in concert with Nazi forces. They may call attention to the evil of the German occupation of various Eastern European countries, but they may not want us to notice that they were doing the same thing themselves at the same time to Finland, Estonia, Latvia, and Lithuania. For all their fervor about their opposition to Hitler, they tend not to highlight the fact that they were fairly content to let him have his way right up to the time he attacked them in June 1941.

They get a lot of traction from calling out the supposed inaction of the United States and British Empire, but they ignore the vast number of supplies flowing to Russian armies from American, Canadian, and British factories. They pay little heed to Anglo-American battles in Italy and Africa, drawing troops away from their frontiers, or the night-and-day air raids by Yanks and Brits on German cities, limiting the industrial capacity of the Fascist foe. Most of all they seem to forget that even as they fought their one war against the Axis’s German contingent, British Tommies, American GIs, and Dutch troops were fighting a second war simultaneously, a war that the Soviets did not deign to join until Japan was already knocked to the ground.

Yet, we have to ask if we are any better? Chinese accounts will often begin World War II in 1937 rather than two years later as that’s when things got hot for them. Americans are notorious for acting as though the entirety of the Second World War was simply a demonstration of good ole Yankee can-do ingenuity. British books on the conflict place London’s resilience at center-stage, and French museums make it sound like it was Gallic strength which carried the day.

So, what’s true? A little bit of everything. The Chinese can reasonably call attention to their long-suffering experience with their Asian neighbor. The British can rightly remember their determination to fight on when all the world said to give in. The Americans can in good conscience note that their industrial capacity built the bombs which destroyed the Axis. The French may have missed out on the war’s second act, but they started and ended the fighting with honor. Each nation sees itself at the center and reduces other participants to mere bit players who provide the background to the hero’s role in the spotlight.

There is a natural human tendency to see things in terms of one’s own individual community, however we define that community. These communities tell us who we are and how we relate to others. Sometimes, as with histories of wars and conflict, it is our national identity which takes precedence. At other times, it’s a matter of our political or religious community which defines life’s parameters. Whoever we are, whatever the situation, we see things in terms of our own viewpoint, often without checking to see whether that viewpoint is correct.

While a discussion about how and why to determine the veracity of a given worldview is important, for now the question is whether or not we admit that we have a worldview at all. The most dangerous sort of bias or prejudice comes not so much from those who are zealous that theirs is the true one but from those who cannot quite fathom that they have a perspective at all.

Can you imagine a fan of a sports team thinking he lacked any preference whatsoever and so should be trusted to be the ref? He wouldn’t even realize how much his unstated and unknown biases would drive his decisions and calls. While it is possible to be fundamentally disinterested in the outcome of a game, the same cannot be said for worldview questions.

Whether we admit it or not, whether we like it or not, we all have a set of preconceptions which act as a filter for our lives. The most potent of these are usually the ones we are least aware of. It is easy to say that there are bad elements within our given society, but what about those problems in our culture which are so much a part of who we are that we never even think about them? If we can look back on the past and wonder how otherwise intelligent and moral people could abide a great moral failing without noticing it, isn’t it possible that we ourselves are subject to similar biases?

If we are going to be morally responsible human beings, we must check and recheck our worldviews again and again. It is inevitable that we will have a worldview; it is not inevitable that this worldview will be true. The challenge is to work throughout all our lives to see to it that it is the truth which drives us and not merely our cultural bias.

Those of us who are Christian are not somehow exempt from this charge. Our understanding of God’s Word is shaped our surrounding culture, as it whispers its own version of truth in our ears so quietly that we don’t even notice it. We see this everyday as people claiming God’s truth for their lives manage to read the Bible through cultural lenses which turn the meaning of His ethical goals on their heads, something we’ve seen in years gone by as well as more recently. When we don’t lift our eyes up from our culture enough to see its governing paradigms, we will never be able to see how it governs our view of the world.

This is a call for caution but not for despair. We don’t have to throw up our hands and act as though our Christian faith is just one more equally untrue prejudice among all the others around us. In fact, one of the virtues of the Christian Worldview is that this enforced humility is part and parcel of our core doctrines. It’s right there in Genesis. We are created beings, meaning that our finite vantage point can never, on its own, provide us with total truth. Further, we are fallen beings, meaning that even our intellectual nearsightedness is corrupted by an overbearing moral myopia.

But, we also have hope. If, as we contend, the Bible is God’s revealed Word to us, we can know that we have an outside observer, a Someone whose perspective is not blinded by limitations or twisted by sin. We know from the Bible that honest questions are always acceptable, even as self-justifying demands are shot down in short order.

The temptation to cultural conformity is always present, all the more so when it is hidden from our eyes. We will inevitably be lured, like an American war movie, to see ourselves at the center of all things and never to question whether our grand story is true. Likewise, there will be an ever-present desire, as with Russian vanity, to ignore the more ignoble elements of our understanding of the world, the better to feel assured that our perceptions are without error. If God has spoken in the Bible, then we may retain the hope that our community and individual biases are not the final word in seeking an accurate worldview.