How Chuck Colson Thought Abortion Would End - Breakpoint
Give today to learn what it means to be a thoughtful Christian!
Skip to content 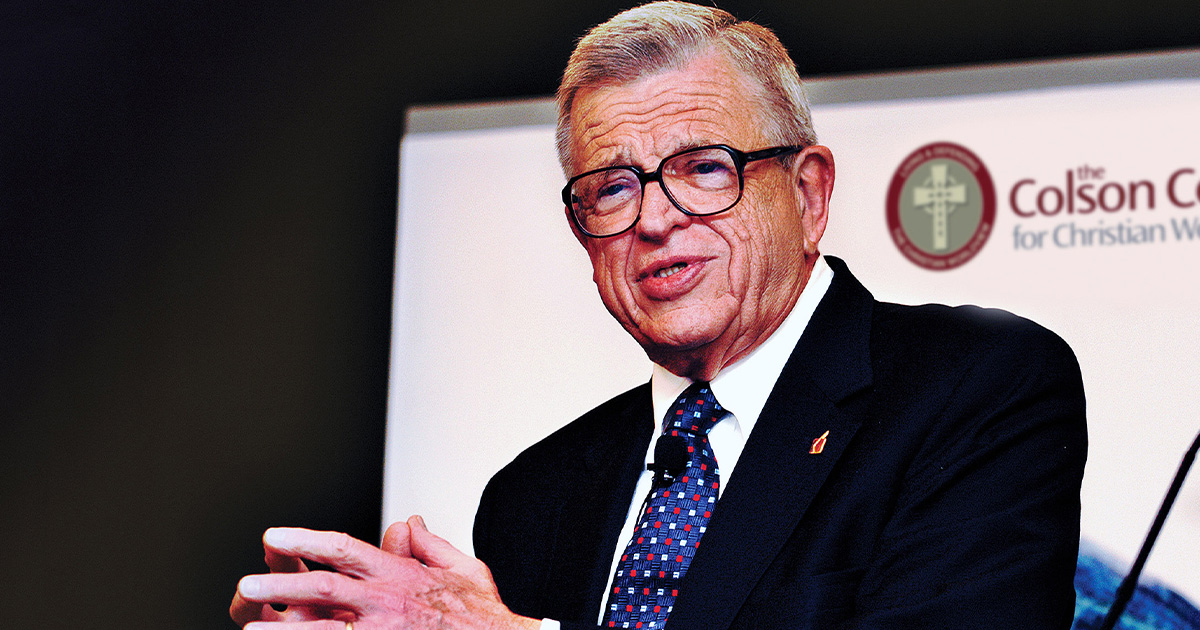 “This,” Chuck concluded, “is the way the abortion war will ultimately be won: through Jesus Christ changing hearts, one by one.

During a prayer gathering on the National Mall a few years ago, Terry Beatley, a commissioned Colson Fellow and president of a pro-life organization called the Hosea Initiative, reminded the crowd of a story Chuck Colson told in a Breakpoint commentary over 25 years ago.

The story, of how God changed the heart of one of our nation’s most notorious abortionists, is about as dramatic a conversion as Chuck Colson’s was. Yet it came in the wake of one of the greatest defeats pro-lifers had suffered since the Roe v. Wade decision. Here’s what Chuck wrote in a commentary entitled “The Ultimate Victory.”

“I was [recently] invited to witness a baptism,” Chuck said, “in the sacristy chapel of Saint Patrick’s cathedral in New York City. About 80 of us sat in a semicircle waiting for John Cardinal O’Connor to arrive.

“While waiting, I couldn’t help but think back to last fall and the Senate’s attempt to override President Clinton’s veto of the Partial-Birth Abortion Ban Act—an attempt that failed. I remember walking the Senate corridors that day, looking for senators and pleading with them to vote to override the veto.

“One of my most dramatic memories,” Chuck continued, “happened while I was sitting in the Senate gallery, listening to the debate over whether it should be legal to commit infanticide—to kill babies already three-quarters born. The senators fell silent for a moment, and just as they did, a baby’s cry pierced the silence. A poignant reminder to both sides of what was at stake that day.

“After the vote I walked down to the Senate reception room and saw the grinning, almost cheering, crowd of abortion supporters. There was Kate Michelman, president of the National Abortion Rights Action League, surrounded by a crowd of people beaming and congratulating each other. They’d won; they’d scored a tremendous victory for the pro-abortionists. They’d stopped the bill.”

Chuck then continued: “Scenes of that day kept flashing through my mind as I sat in that dimly lit chapel at Saint Patrick’s. Why? Because the candidate for baptism was none other than Bernard Nathanson, one of the abortion industry’s greatest leaders, a man who personally presided over some 75,000 abortions, including the abortion of his own child.

“I watched as Nathanson walked to the altar. What a moment. Just like the first century—a Jew coming forward in the catacombs to meet Christ. And his sponsor accompanying him to the altar was Joan Andrews. Ironies abound. Joan is one of the pro-life movement’s most outspoken warriors, a woman who spent five years in prison for her pro-life activities.

“… just above Cardinal O’Connor,” Chuck continued, “was a cross. As I reflected on the day when infanticide could not be stopped by the United States Senate, I realized that I was witnessing, this day, the victory. I looked at that cross and realized again that what the Gospel teaches is true: In Christ is the victory. He has overcome the world, and the gates of hell cannot prevail against His Church.

“We might have taken a beating in the Senate on partial-birth abortion, but only temporarily. Because there at the altar was a man, who spent three decades in the satanic world of abortion, joyfully accepting forgiveness in Christ.

“And there were 80 people huddled in the catacombs of Saint Patrick’s Cathedral, celebrating a victory Kate Michelman could do nothing about: the triumph of the Gospel over evil.

“This,” Chuck concluded, “is the way the abortion war will ultimately be won: through Jesus Christ changing hearts, one by one. No amount of political force, no government, no laws, no army of Planned Parenthood workers can ever stop that. It is the one thing absolutely invincible.

“That simple baptism, held without fanfare in the basement of a great cathedral, is a reminder that a holy Baby, born in a stable 20 centuries ago, defies the wisdom of man. He cannot be defeated.”