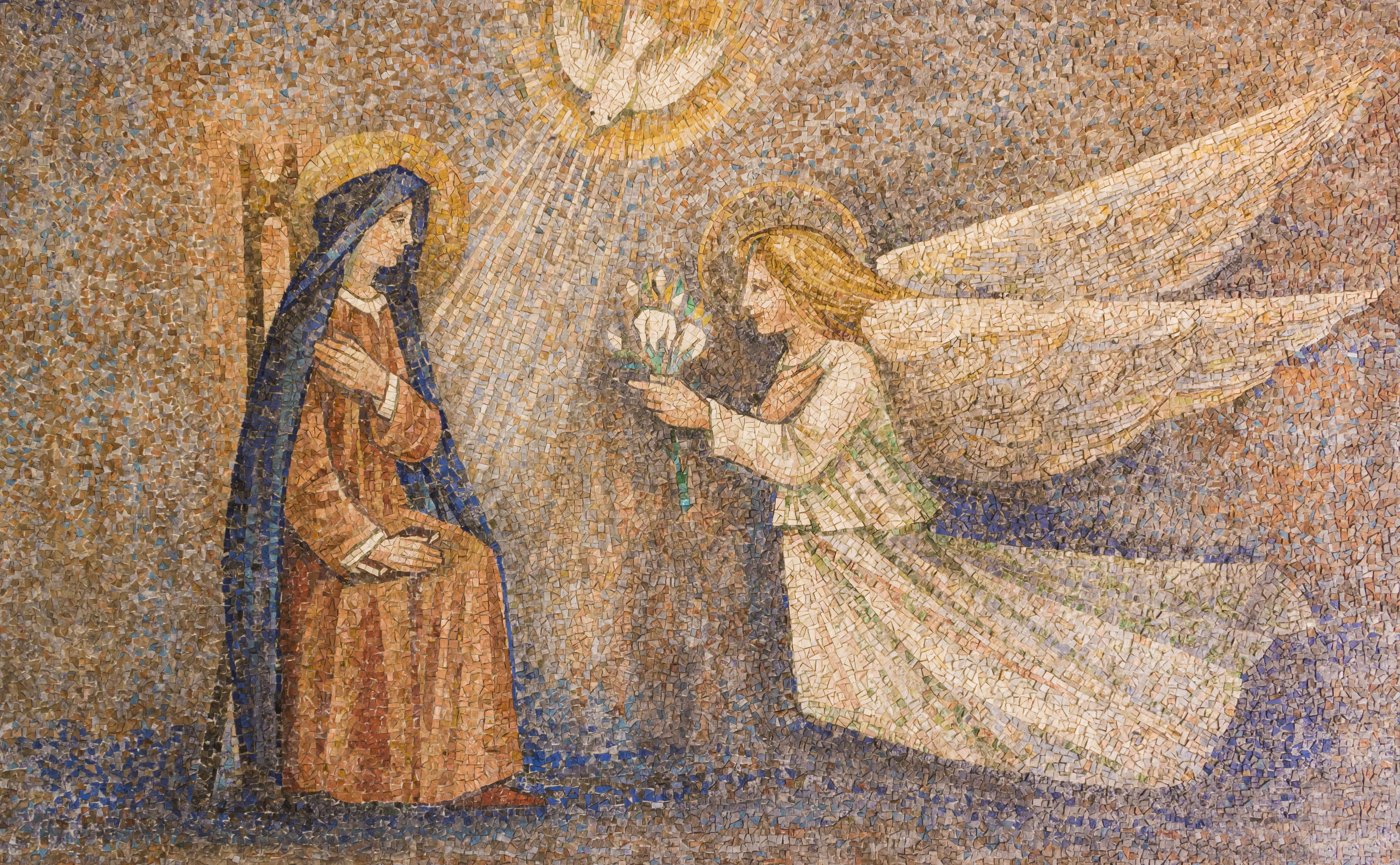 
Mary Wasn’t Ready to Be A Mom

Each Advent offers a new opportunity to meditate on some of the strangest mysteries of God: That He made Himself human. That he would be born lowly (and stay that way). That He would be born of a virgin.

It’s our first glimpse of the virgin birth in the Gospel of Luke that offers one of the most provocative, counter-cultural responses ever given by a Biblical character to a revelation from the Lord.

When the angel Gabriel tells Mary – a young, unmarried virgin – that she will give birth by the Holy Spirit to the Son of God, we have every reason to believe she knew the cultural implications. She assumed (rightly) that Joseph would not marry her. She’d be ostracized from her Jewish community and considered unclean. As a result, she’d face dangerous poverty. Still, her response to the angel was:

It’s ironic that Mary’s radical submission sets in motion the events we celebrate at Christmas, a holiday too often dominated by consumerism. Mary’s self-forgetfulness is a poignant antonym to the gift-getting season. It’s also antithetical to the way so many of us approach what was thrust, unexpected, on Mary in Luke 2: parenthood.

My husband and I married in our early twenties. We didn’t consider ourselves “ready” to have children. We weren’t even sure we ever “wanted” them. Our pastor at the time said that was fine; as long as we were “on the same page.” We had a travel bucket list, first of all. We had a goal in mind for our savings account. I wanted to go to Thailand. We didn’t even own a house yet! (Imagine!)

It’s unlikely Mary – or her first-century contemporaries – would have recognized a single one of these newly-married, self-indulgent impulses. Somewhere between Mary and me, something big got lost.

Writer and theologian Christopher West, in his book Our Bodies Tell God’s Story (which is a lay-language translation of the late Pope John Paul II’s “Theology of the Body”) controversially asserts that the introduction of contraception into our sexual ethic sent the world – yes, the whole world – into a tailspin.

“The biblical vision of sexuality as understood throughout the ages can be summarized very simply: marriage, sex, and babies belong together – and in that order,” West writes. “When we begin untying the tight-knot nexus of marriage, sex and babies, we end up redefining all three.”

Contraception, West argues, sent our imaginations running askew. It flipped our perspective of one of our core design elements – our capacity to make babies – into the perfect inverse of Mary’s perspective: It fooled us into believing we had control over it. And when we had believed that long enough, we started to believe we should have control over it.

God designed women’s bodies with a cycle that allows for natural “contraception.” The Bible doesn’t prohibit strategic family planning. But as we contemplate this Advent Mary’s remarkable submission to a motherhood she couldn’t control, we must admit we’ve fallen far short of her humility.

In his new book, What it Means to be Human, O. Carter Snead, the Director of Notre Dame University’s de Nicola Center for Ethics and Culture says our problem is an anthropological one. What’s been lost between Mary and us, he says, (and what Christopher West might argue contraception has stolen) – is a shared concept of what it means to be human.

The Bible paints a picture of humanity as embodied souls. Snead says we are created and born with bodies and minds, meant to exist in community, including as parents. Modernism, by contrast, conceptualizes human flourishing as the expression of our own independent wills. We are defined by our capacity to do what we want. Bodies are important, in this view, only inasmuch as we can use them toward that goal.

Our contemporary view of parenthood is Exhibit A. Assisted reproduction – technologies including surrogacy, sperm donation, egg donation, and in vitro fertilization (IVF) – are together a multi-billion dollar global industry and have permeated the American evangelical church. Certainly no one – especially couples struggling with infertility – approach these endeavors lightly. Most seek assisted reproduction with honesty and in good faith, even as a gift from God. Many doctors pursue work in those fields out of a real desire to help families.

But we have to reckon with the reality that the availability of this technology, as well as contraception and abortion, has fundamentally altered the way we view ourselves. As Christopher West predicted, the “redefining” has started. If marriage and babies no longer “go together,” marriage becomes simply a means to find our own individual “happiness.” Sex is reduced to an exercise in personal pleasure. Babies can become “products” – either to be sought on our own “timetable” or discarded.

In each assisted reproductive industry – from surrogacy to sperm donation to, in some cases, IVF – we commit a separation that Mary did not see fit to request. Surrogacy creates babies with the expressed intent to separate them from the only thing they know – the women who carry them. Using donated sperm to create a child robs that child of his or her right to their father. Even IVF, when pursued unethically (such as in cases when parents create more embryos than they intend to parent), separates embryos – full, human people – from their parents. Each of these endeavors also separates babies from sex within the sacred knot of marriage.

The Church would never have embraced assisted reproductive technologies without first indulging an anti-Biblical assertion of control over childbearing. While God sees and laments every pain we experience, including infertility, His Word never suggests we are entitled to have our own biological children. Neither does He issue the right to pursue intentionally childless “marriage,” because that’s not what marriage is for.

How did we get here?

I think we try to assert control over family-building because in an age of so much comfort, we reject the notion that there should be any pain in parenthood.

When my daughter was born in 2016, I was shocked by what I felt for her. Jonathan Safran Foer, in his 2016 novel Here I Am, calls parenthood “too much love for happiness.” Just a few tender weeks postpartum, I remember wrapping my girl in one those creamy-soft hospital blankets and bringing her to my women’s Bible study group. A fellow mom (I considered myself a veteran by this point) was asking for prayer. Her 16-year-old daughter was going for her driver’s test that week. I immediately started crying. Hormones, sure. Even so, it felt real! This tiny little chubby, perfect face wrapped in a panda bear blanket? Driving? In 16 impossibly short years?

“Remember the curse God levels on Eve (and the rest of us) in Genesis 3:16?” The Sunday after that Bible study, I confronted my pastor about my newly discovered fear-love. This was his “advice” (it felt more like a theological bow-and-arrow): “‘With pain you shall bring forth children,’” he recited to me, in an e-mail. “That is NOT just about childbirth… It is about the entire experience of having children.”

But for some reason, many of us – especially those with considerable privilege – don’t. I suspect I was shocked by how I felt about my newborn daughter – love that played itself as fear – in part because my only imagination about the first weeks of having a baby was bliss. I was blessed with financial stability and a supportive husband. We had planned and hoped for our girl before she came. I had pictured snuggles, smiles, and really only the kind of challenges that I, along with my many supportive friends and family, could easily solve.

We’re not good at expecting pain when we’re surrounded by so much comfort. That can be pleasant, but it’s not good for us. Comfort-entitlement breeds a sort of consumerism – all year-round – that leaves us unprepared for reality. It lulls us into forgetting that we’re embodied image-bearers at the mercy of our Creator; not mere pleasure-seekers sitting at the helm.

As a newlywed, I approached building my family not as Mary did – as an act of submission to God’s good design for humanity and His good will for me – but first and foremost as a consumer. I wanted marriage because my husband made me happy, not because I submitted to it as God’s beautiful way of continuing to populate His kingdom. Back then, I said I didn’t “want” kids (or that I didn’t want them “yet”) because I thought they were things to want or not want yet; not image-bearers that God would be pleased to entrust to us… or to withhold.

What if Mary had asked the angel if she were really ready for kids? If having a son would really make her happy? What if she’d believed she had control; or that she’d had a right to control? In that case, she may never have borne our Messiah: the very One who can take every pain of parenthood and infertility and, while enduring it with us, give us the full comfort of promising that in His kingdom, that pain will be no more.