Missing the Handmaid's Tale - Breakpoint
Give today to learn what it means to be a thoughtful Christian!
Skip to content 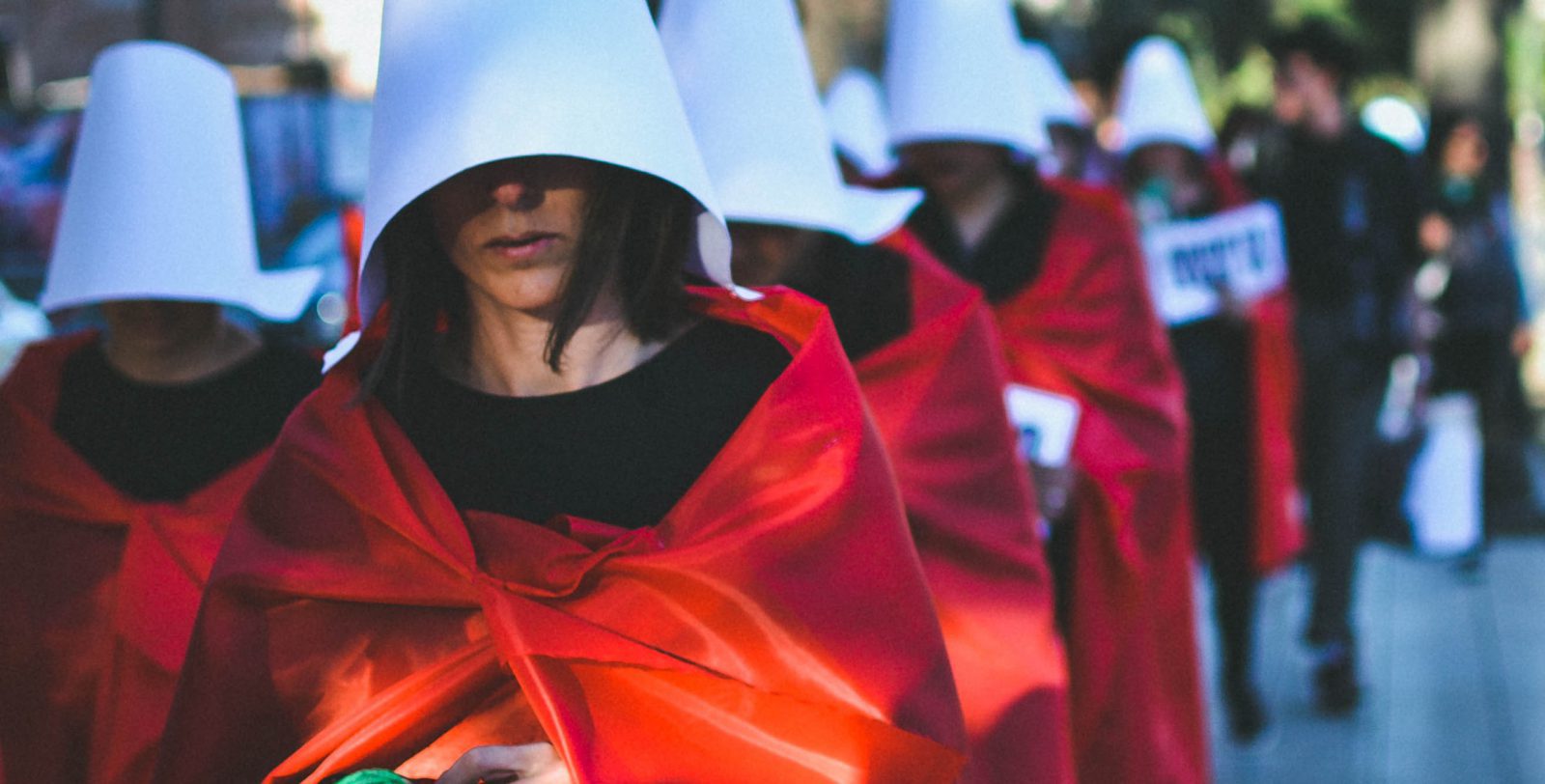 It was while I was working in overflowing refugee settlements in East Africa that “The Handmaid’s Tale” made its first waves in my social media feed and major news headlines. From the buzz that reached me, this dystopian tale of Gilead—a futuristic America overtaken by a brutal, religious cult that subjugates women through mass rape, forced impregnation, genital mutilation, and torture—seemed eerily similar to the land whose people were starving in front of me.

In the summer of 2017, I was living in Uganda, working with South Sudanese refugees who were fleeing across their nation’s border to escape horrific violence being perpetrated by warring factions. South Sudan’s still-ongoing civil war has featured brutal and widespread sexual violence against women as a tactic of war

The United Nations Commission on Human Rights reports that 2.2 million refugees have fled the country since the fighting started,all striving to escape the brutal tactics used on all sides of the conflict, including “brutal rapes including multiple gang rapes, sexual slavery, abductions, forced marriage, forced pregnancy, forced abortion, and mutilation of sexual organs, as well as killing.”

Over these past two years, the cultural phenomenon of “The Handmaid’s Tale” has emerged. This spiraling series with a loyal and shockingly large following has now been renewed for a fourth season on Hulu. Featuring an A-list cast and impeccable production quality, “The Handmaid’s Tale” follows the life of June Osborne (Elizabeth Moss), a forced surrogate, or “handmaid,” who is torn away from her husband and daughter and repeatedly raped by multiple men seeking to impregnate her.

But June is not alone. The fundamentalist society has legalized and standardized a wide-reaching system of rape, mutilation, and forced surrogacy that enslaves women, all for the sake of bearing children on behalf of high-class infertile couples. As June and her fellow handmaids are tortured, mutilated, and raped, episode after episode after episode, one cannot help but want to scream.

Three months ago, I began intentionally researching coverage of “The Handmaid’s Tale” in major news and entertainment publications in the U.S. Nearly every major news publication—from The New York Times to the Washington Post to Time Magazine to the Cosmopolitan to The Huffington Post—has featured article after article covering the show’s mass appeal, real-world relevance, and power to inspire change.

I also noticed repeated assertions by cast, producers, fans, TV critics, and even a presidential candidate that the United States was sliding toward Gilead, was becoming Gilead, or was actually now practically indistinguishable from Gilead. What is the evidence of such a connection?

To my shock, “Handmaid’s Tale” media coverage overwhelming (and often exclusively) connects the story to a single real-world issue: abortion restrictions. The link likely finds its roots in pro-choice groups’ use of the show’s costumes to protest restrictive abortion legislation in places as wide-reaching Texas, Georgia, Ohio, Arkansas, and Alabama.

But more recently, the connection has become a blatant marketing point of the show’s creators and actors. In a June 2019 interview with CNN, “Handmaid’s Tale” star Ann Dowd makes the case that new state-level abortion laws are evidence that the United States is sliding toward Gilead. Executive producer Warren Littlefield echoed Dowd’s sentiments, declaring he “would not go near” any state that passed a restrictive abortion law when filming “The Handmaid’s Tale.”

While dozens of articles are circulating featuring quotes from cast and crew comparing state-level abortion restrictions in the U.S. to “The Handmaid’s Tale,” seven of the show’s most prominent stars threw all subtlety out the window by filming a two-minute-long PSA for Planned Parenthood—the largest abortion provider in the United States. The PSA condemns “Heartbeat” bills across the nation, which ban abortion after a fetal heartbeat can be detected and calls out the five states to have passed such legislation. The dramatic video builds to a powerful line shared by three starring actresses: “When we start restricting access to abortion, our country takes one step closer to Gilead. And we cannot let that happen.”

Although abortion is not at all a central theme in the actual storyline of “The Handmaid’s Tale,” the show is consistently framed in mass media as a cautionary tale of the evils of abortion restrictions. This raises an important question: Does the American population conceptualize abortion in the same manner as these nearly unanimous popular media voices?

Survey data from both Pew Research and Gallup give a clear answer: no. In their 2019 survey of American attitudes regarding abortion, Gallup reports that Americans are nearly evenly split between identifying as “pro-choice” vs. “pro-life.” In terms of abortion legality, Pew Research reported in 2018 that a majority of Americans support legal abortion, with 58% saying they believe abortion should be legal in all or most cases.

When discussing abortion morality, opinions grow even more controversial. Gallup reports that a full 50% of Americans believe abortion is “morally wrong” while only 42% claim it is “morally acceptable.” And although “Heartbeat” bills that seek to ban abortion after the sixth week of pregnancy when a heartbeat is detectable are often framed as radical, Gallup finds that 40% of Americans support “Heartbeat” legislation.

In the face of public opinion research, the notion that pro-abortion American women are in the fight of their lives against white, male, fundamentalist radicals rings false. Abortion supporters are not simply colliding with fundamentalist women-haters; instead, they are colliding with nearly half of the U.S. population, including millions of women and people of color.

And yet, mass media outlets and “Handmaid’s Tale” creators continue to associate those who support abortion restrictions with the leaders of dystopian Gilead. In so doing, our culture’s most powerful voices have equated 40 – 50% of our diverse American population with the most brutal of rapists, torturers, and murderers. Is this helpful for political discourse?

Few would question that our nation finds itself in a stunning climate of political polarization. Yet our modern understanding of social psychology warns that dramatic and threatening condemnation of others’ deeply-held moral viewpoints fuels polarization.

Psychologist Jack Brehm formalized the social psychological Theory of Reactance in the 1960s, a particularly contentious decade in American history. Brehm posited that when humans experience a threat to their freedoms—including the freedom to express beliefs without facing vicious accusations—they often respond to the threat by doubling down on their beliefs and rejecting the threatening influence outright.

To put it simply, telling people that their abortion views make them akin to mass rapists, torturers, and genital mutilators won’t bring them to the discussion table; it will send them packing. Such vitriolic polarization casts a foreboding shadow on our nation’s future.

Yet beyond polarization, a second cultural ill emerges from the abortion and “Handmaid’s Tale” connection. With countless articles and interviews decrying abortion restrictions as a uniquely noteworthy abuse of women, what other abuses are being crowded out of the discussion?

One United Nations study in 2016 surveyed women in a large refugee settlement just outside of South Sudan’s capital, Juba. Researchers discovered that 70% of the women reported having been raped in the conflict and nearly 80% reported having been forced to watch the rape of someone else.

As hypothesized in Max McCombs and Donald Shaw’s heavily-researched Agenda Setting Theory (first introduced in 1972), mass media plays a powerful role in determining what Americans think about, and conversely what we don’t think about.

Women in South Sudan are continually facing real-life horrors eerily similar to those experienced by fictional handmaids. The breadth of the violence is devastating. One United Nations study in 2016 surveyed women in a large refugee settlement just outside of South Sudan’s capital, Juba. Researchers discovered that 70% of the women reported having been raped in the conflict and nearly 80% reported having been forced to watch the rape of someone else.

Horrifically, systematic rape is not unique to South Sudan. Throughout history rape has been wielded as a weapon of war across the globe. But news coverage of such modern abuses remains slim, and connections to “The Handmaid Tale” appear non-existent in mass media.

In another stunning real-world connection to the forced rape and surrogacy of fictional “handmaids,” coercive surrogacy practices abound in the developing world and are propped up by Westerners seeking cheap, fertile wombs. A body of research and investigative journalism has emerged indicating that several developing nations house lucrative foreign commercial surrogacy businesses, attracting thousands of Westerners who prefer the cheap rates of unregulated foreign surrogacy.

Yet investigations have revealed that some surrogates in developing nations are illiterate, have no legal protections, and are recruited from slums with inflated promises of riches, convinced that surrogacy is their only option to escape utter destitution. Increased awareness of coercive surrogacy has led to foreign surrogacy bans in multiple nations in the last three years, including India and Thailand.

But, coercive commercial surrogacy remains a thriving industry. While a handful of writers have made the connection between real-world coercive surrogacy practices and “The Handmaid’s Tale,” the abortion parallel has massively overshadowed any discussions of coercive surrogacy, resulting in a missed opportunity to illuminate this abuse of women worldwide. The agenda has been set: discussing “The Handmaid’s Tale” means discussing U.S. abortion restrictions and little else.

I will never be able to enjoy watching “The Handmaid’s Tale.” Many of the abuses of women so brutally depicted in the show are real, even if the story itself is not. And yet the mass media narrative surrounding the work remains dominated by fury regarding abortion restrictions.

The hateful polarization posed by this framing, along with the missed opportunity to awaken Americans to the plight of women around the globe, casts remarkable doubt on the integrity of popular American media. That doubt plagues me.

As Elizabeth Moss stares into the camera for yet another sullen, traumatized glare—lips trembling, eyes red and puffy—my mind slips to the stares of hundreds of South Sudanese eyes fixated on mine. Until dominant media voices can shake their obsession with abortion, those women’s eyes and billions more will remain unseen in American culture. That should horrify us.

After all, blindness to truth is the most frightening dystopia.

The author is a writer and researcher working in the Midwest