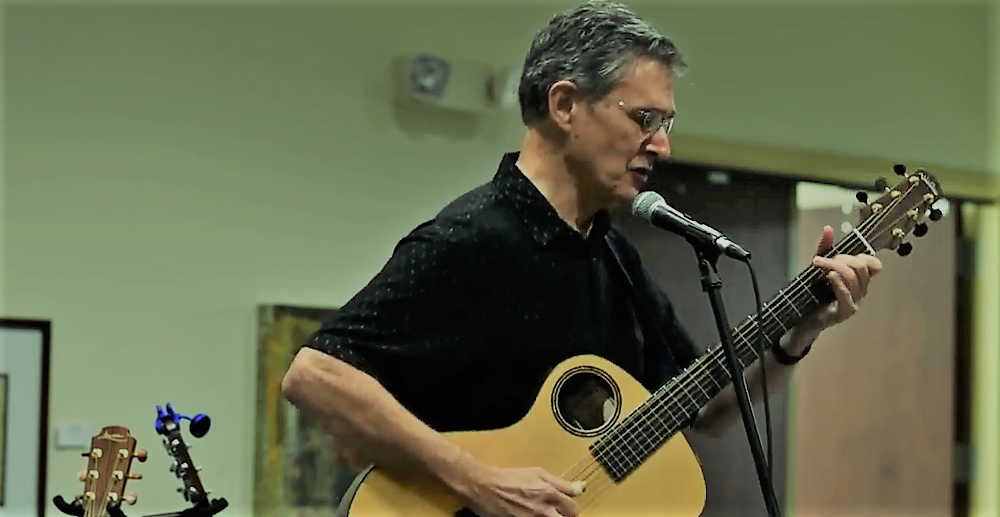 One of a guitar player's worst fears was coming true on-stage for Pierce Pettis. He broke a string in the middle of a song - actually on the opening strum of a song near the end of a 90-minute set. Pettis was on-stage Valentine's Day a few years ago before a near sold-out crowd of couples on dates and others at The Evening Muse, a club in Charlotte, N.C. The club has developed a national reputation among Americana and roots music performers and fans. Because Pettis uses a lot of alternate tunings, he had another guitar sitting nearby, and he reached for that guitar to finish the set. Then he stopped. "You know what?" he told the crowd. "I really want to do this song. I just think it needs to go here tonight." And with that, he fished into his case, instantly grabbing the right string, and re-strung his guitar while telling a funny story about love and Valentine's Day and life on the road. About 90 seconds later, he strummed the opening chord again, perfectly in tune, and delivered the last line of his story to laughter and applause. It was a stunt only a seasoned troubadour could have pulled off. It was also, in many ways, a 90-second look at what it means to engage in the process of restoring beauty to a broken world. It also symbolizes the artistic process of Pierce Pettis, which can be described as taking life's setbacks and turning them into new artistry. Pettis has been doing that very thing since becoming a staff writer in 1979 for music giant PolyGram. His reputation as a songwriter should have gotten a boost that year when Joan Baez recorded his "Song at the End of the Movie" on her final album for CBS records, Honest Lullaby. But that album tanked. So, Pettis took over, recording his own music. His first album came out in 1984, when he was a part of the so-called "Fast Folk" movement that also included Lyle Lovett, David Wilcox, Suzanne Vega, and Suzy Bogguss. Pettis became known as a careful and poetic songwriter, and his tunes were covered not just by Baez, but by Garth Brooks, Dar Williams, as well as Christian market performers Sara Groves and Randy Stonehill. But one of the most significant relationships of Pettis' professional career was with singer, songwriter, producer, and music industry entrepreneur, Mark Heard -- who, like Pettis himself, had something of a love-hate relationship with contemporary Christian music. Heard produced Pettis' 1991 album Tinseltown, and Pettis and Heard were together at the Cornerstone Festival in 1992 when Heard had a heart attack. As Heard was being taken to the hospital, he encouraged Pettis to finish the set. Heard died at the hospital, and in some ways that admonition to finish the set has stayed with Pettis. In fact, every album Pettis has put out since then has included a Mark Heard song. Now in his 60s, Pettis’ album production has slowed down. His new album, Father’s Son, is his first in a decade, and only his second full-length album in 15 years. WORLD’s Arsenio Orteza says it begins with a “brisk three-chords-and-the-truth” song called “Wouldn’t Change It For The World." From there, though, the album becomes reflective, though not nostalgic, which can be a danger for artists who have been at their craft for a while. That’s not to say, though, that Pettis doesn’t in some ways salute the past. He takes the well-known “Prayer of St. Francis” and pours it into a new musical wineskin. He also includes a Mark Heard cover, as he has done on each of his albums since Heard’s death. This time he features “Look Over Your Shoulder,” one of Heard’s darkest, most introspective, and most beautiful. A few years ago, Pettis told me that it’s a “pleasant surprise" to him that people still turn out to hear him play. “At this point, I'm not chasing the success,” he said. “I'm just trying to do the best I can at the few things I'm good at. To leave a few songs that I can say are as good as I knew how to make them, and hope that in the end they add up to something." In some ways, Pettis is still trying to do what Mark Heard told him to do on the stage at Cornerstone in 1992: “Finish the set.” Since then, despite broken strings and broken hearts, Pierce Pettis has continued to restore a little truth and beauty to a broken world.   Warren Cole Smith is the Vice-President of Mission Advancement for the Colson Center for Christian Worldview.
This article is one in a series based on the ideas in the book Restoring All Things:  God’s Audacious Plan To Change The World Through Everyday People by Warren Cole Smith and John Stonestreet.  To see all the articles in this series, click here.  If you know of an individual or ministry that might make a good “Restoring All Things” profile, please email wsmith@colsoncenter.org
Image: YouTube

Calling
Christianity and the Arts
Creation
Creativity
Music
The Arts