Should John Witherspoon’s Statue Remain at Princeton? - Breakpoint
Give today to learn what it means to be a thoughtful Christian!
Skip to content 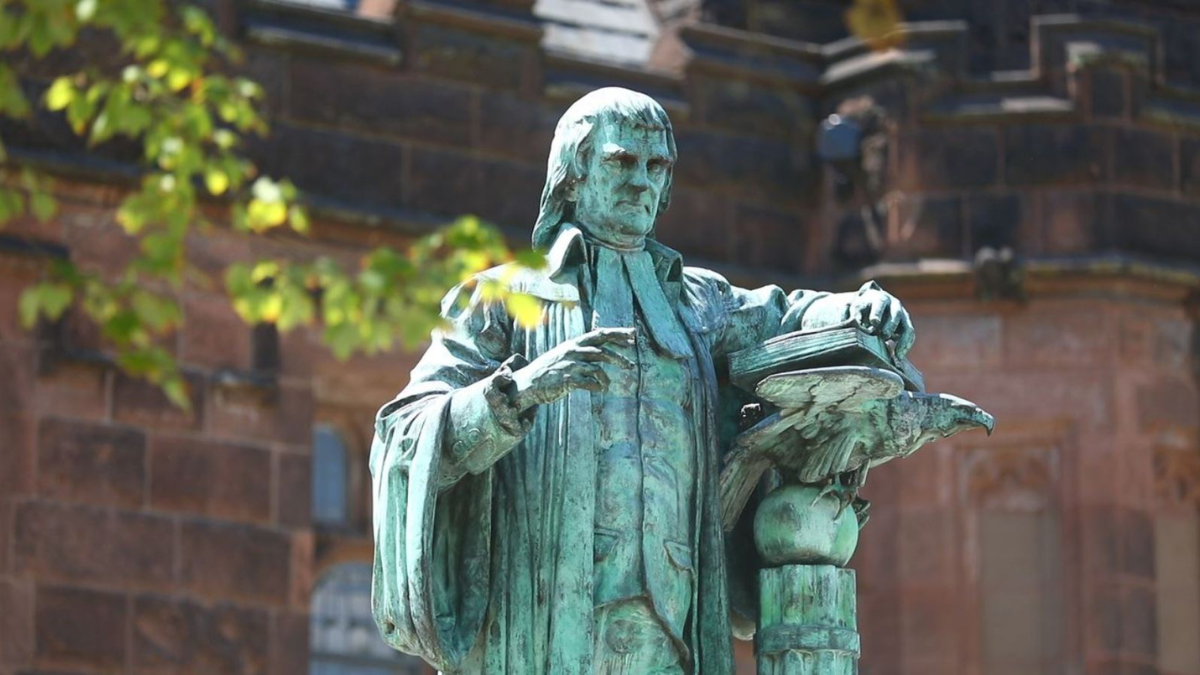 Princeton University is considering a petition, signed by nearly 300 members of the campus community, to remove a statue of John Witherspoon.

Princeton University is considering a petition, signed by nearly 300 members of the campus community, to remove a statue of John Witherspoon. According to the petition, “paying such honor to someone who participated actively in the enslavement of human beings, and used his scholarly gifts to defend the practice, is today a distraction from the University’s mission.” In place of the statue, the petition requests an informational plaque that would describe “both the positive and negative aspects of Witherspoon’s legacy.”

Witherspoon accepted the presidency of the College of New Jersey in 1768. The Presbyterian school would not be renamed Princeton University until 1896.

Immediately, Witherspoon faced a series of problems at the school. Through a combination of fundraising in New Jersey and in Scotland, updating the curriculum based on the University of Edinburgh, purchasing maps and scientific instruments, and expanding the library (including contributing 300 of his own books), he transformed the school into a thriving and important institution.

In addition to his leadership at such a crucial time in the university’s history, Witherspoon also taught courses in rhetoric, history, and divinity. His greatest contribution may have been a required course in moral philosophy. His ideas, anchored in his Reformed faith, the natural law tradition, and Scottish philosopher Thomas Reid’s Common Sense Realism, took deep root at Princeton and in American society.

Witherspoon believed firmly in the right of people to resist unjust laws and tyrannical government, by force of arms if necessary. Not surprisingly, he supported the American Revolution, serving in the Continental Congress from 1777 to 1784. He took on a prodigious amount of work, participating in over 100 committees. After the war, he helped draft the Articles of Confederation and later helped shepherd the Constitution through the New Jersey Legislature.

As impressive as his resume is, Witherspoon’s biggest impact came through his students. He was a shaping influence on James Madison, especially on the necessity of checks and balances in government. His other students include Vice President Aaron Burr, 37 judges—including several members of the Pennsylvania Supreme Court and 3 U.S. Supreme Court justices—10 cabinet officers, 12 members of the Continental Congress, 28 U.S. Senators, and 49 U.S. Congressmen. Because of his work shaping so many who influenced the early years of the American Republic, Witherspoon was arguably the most influential of America’s founders.

Witherspoon also owned slaves, two to be specific, used to work farmland in New Jersey. Like so many of the founders, Witherspoon’s attitudes toward slavery cannot fit into comfortable categories. On one hand, he taught that slaves and employees should be treated with dignity and respect. He even spoke out against slavery at the College. At the same time, however, he opposed a measure in the state legislature that would have banned slavery in New Jersey. Like others, he believed slavery would die out within a generation, and so legislation was unnecessary and could interfere with a process he believed to be inevitable. In fact, there were very few consistent abolitionists among the founders. Most eighteenth-century elites owned slaves, either as domestic servants or to work land.

Princeton Professor Robert P. George has described a way he challenges students to think about the past and the human condition, particularly those contexts which featured evils so obvious to us today. He asks the students which side of the issue they would have taken. Unsurprisingly, he says, nearly all claim that they would have been on the side of justice and human rights. His response is to ask whether they have ever taken an unpopular stand that risked their reputation, job, family, or life. If not, according to Professor George, it is unlikely they would have opposed slavery.

Whatever comes of the petition at Princeton, it at least attempts to remember a towering historical figure rather than erase him, and to consider his life as a human being within a context rather than simply impose a sense of moral superiority. So many efforts today to simply cancel people and erase history are based on flawed understandings of ourselves and the past, as if we’ve morally evolved to some new high ground and are not ourselves culpable for morally mixed beliefs and behaviors. Not only does this approach reek of chronological snobbery, but it leaves us with a shockingly short list of heroes to look up to and learn from.

We ought to learn from the past, but we should remember that those who come after us will also find cause to condemn the planks we failed to see in our own eyes.

This Breakpoint was co-authored by Dr. Glenn Sunshine. For more resources to live in this cultural moment, go to colsoncenter.org.