CNN and 586 BC - BreakPoint
Learn how to make abortion unthinkable by giving your gift of any amount today!
Skip to content 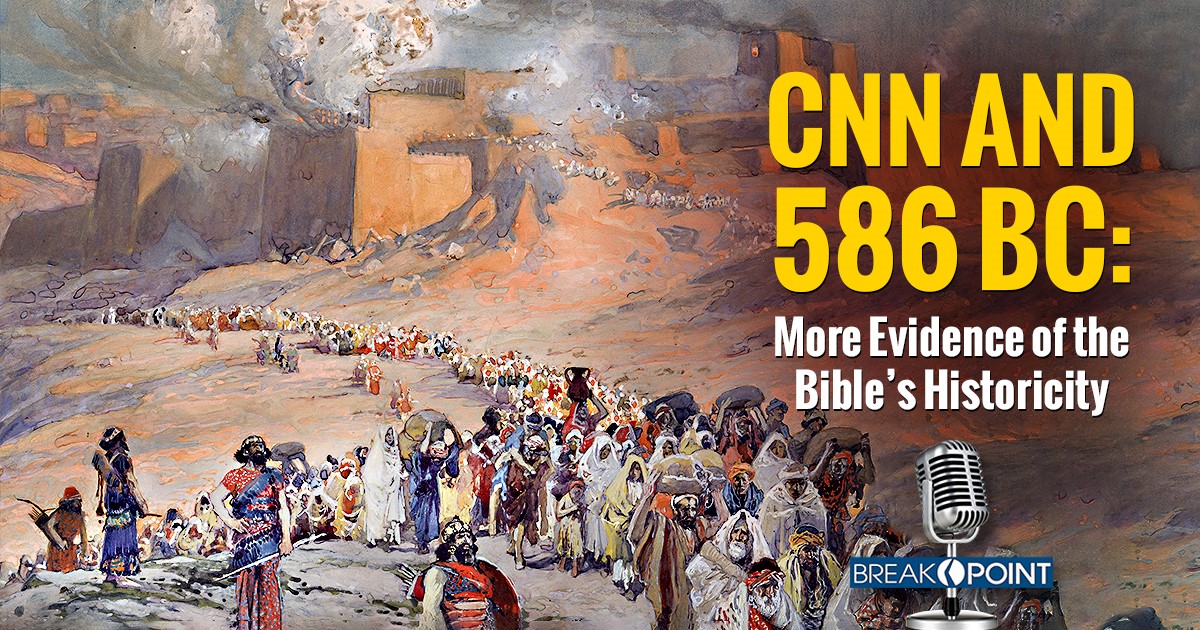 In Jeremiah 15, God tells the prophet that “I will make [Jerusalem] an object of horror to all the kingdoms of the earth because of what Manasseh, son of Hezekiah, king of Judah, did in Jerusalem.” Can you imagine God saying that He’s going to make you “an object of horror”?

Well, as God does, He kept His word. The wealth of Jerusalem’s inhabitants was given as plunder to invaders, only after they were starved, put to the sword, or enslaved.

Of course, passages like this one, in which God “speaks,” are rarely taken seriously, much less historically, in academic circles. And, among other things, scholars have long assumed that the “real” Jerusalem was pretty insignificant, closer in size and splendor to Dayton, Tennessee than Dayton, Ohio, and not even close to being the Iron Age equivalent of Paris or New York.

In other words, many scholars have long assumed that the stories of Jerusalem’s rise and subsequent destruction were over-inflated, self-serving myths intended to serve theological and political purposes.

A recent story at CNN described an archaeological dig on Mount Zion, and the findings of things like “ash deposits, arrowheads and broken pieces of pots and lamps.”

What archaeologists found with the ash strongly suggests the invasion interpretation. As one historian put it, “nobody has arrowheads in their domestic refuse.”

And then there was this find: A piece of “jewelry, which appears to be a tassel or earring with a bell-shaped upper portion.” Just as “nobody has arrowheads in their domestic refuse,” “nobody abandons golden jewelry.”

The arrowheads provide the answer. A type known as Scythian arrowhead, these were “‘fairly commonplace’ in battle sites from the 7th and 6th centuries BC and were known to be used by Babylonian warriors.”

Jerusalem was destroyed by the Babylonians in 587 and 586 B.C. Thus, CNN’s headline: “Archaeologists find evidence of Babylonian conquest of Jerusalem — as told in the Bible.”

Not only do these findings corroborate the Babylonian conquest, they also back up what the Bible says about life in Jerusalem in the decades leading up to the conquest. Most notably, the project director told CNN, the jewelry is “clear indication of the wealth of the inhabitants of the city at the time of the siege.” Turns out, Jerusalem had wealth worth plundering after all.

I love telling about these sorts of discoveries on BreakPoint. Especially in the past quarter century, archaeology is constantly finding evidence for the historicity of biblical narratives long assumed to be myths, legends, or complete fabrications. We’ve gone from kings David and Solomon being fictional characters to being glorified tribal chieftains to — what do you know? — pretty big deals who left evidence of their reigns throughout the region.

The confirmation is not only gratifying; it’s extraordinary. After all, no other ancient text, especially those that offer the origin stories of other religions, nations, or regions, is even remotely equivalent to the Bible in its accuracy. For example, Rome was either founded by Romulus after he killed his twin brother Remus, or it was founded by refugees from Troy after the events described by Homer. These two stories cannot be reconciled but, then again, they aren’t intended to be actual history.

In contrast, the biblical story of a distinct people and their relationship with the God who personally intervenes in their (and in our) history to effect His purposes is a remarkably coherent story. And discoveries like the one on Mount Zion reveal it’s a historically accurate story as well.