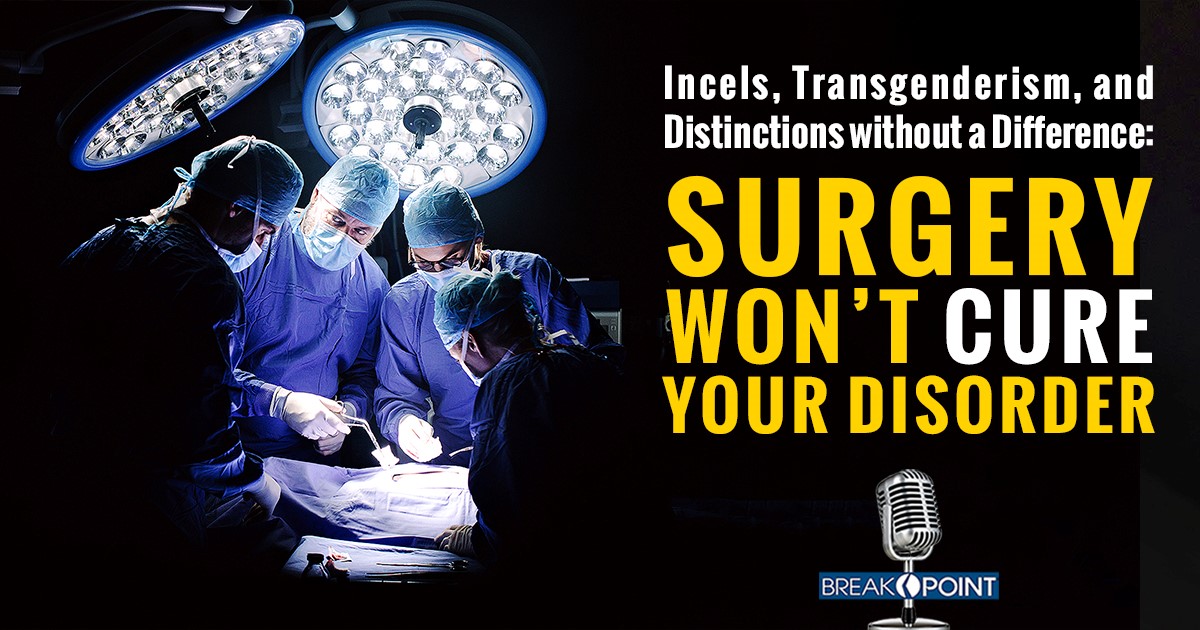 A recent story in New York Magazine asked readers how many bones they would be willing to break in order to attain intimacy—or something to that effect. They weren’t referring to injuries from fighting with another man over a woman. They were referring to cosmetic surgery. Nor were they referring to surgery performed on an older man to make him look younger. They were referring to surgeries performed on young, twenty-something men who hate the way they look and are convinced that they are doomed to involuntary celibacy unless they go under the knife. Such men are known as “Incels,” described as “an online community of men united by their inability to convince women to have [intimate relations] with them.” “Incels” is short for involuntary celibates. The central character in the article goes by the moniker “Truth4lie.” This young man in his 30’s has spent time in a psychiatric hospital; he’s exchanged blows with his father. He even punched his sister in the head as a child.  To put it gently, he’s got some problems. However, after spending time on Incel forums, “Truth4lie” became convinced that his real problem was his appearance. His friends and family, on the other hand, are convinced that he suffers from “body dysmorphic disorder,” an extreme anxiety “about an imagined physical defect that others often cannot see.” People with the disorder often resort to plastic surgery “to try to improve their appearance.” That’s exactly what “Truth4lie” did. In 2016, he flew from the Netherlands to Indianapolis to see a surgeon who specialized in what’s called “aesthetic surgery.” He returned to Indianapolis three times in the next year in pursuit of an ideal face. As he told New York Magazine, “The prospect of a better surgery result is keeping me alive.” We’re clearly intended to see “Truth4lie” as a sad, even pathetic figure, according to this article. To further drive home the point, the article notes how many cosmetic surgeons refuse to operate on people if they suspect they suffer from body dysmorphic disorder. Surgery is not a cure for a psychiatric disorder. But of course, gender dysphoria is another psychiatric disorder. In this condition, “a person experiences discomfort or distress because there's a mismatch between their biological sex and gender identity.” As with body dysmorphic disorder, people who suffer from gender dysphoria often suffer from other psychiatric illnesses, such as major depressive disorder and various phobias. A study published in 2014 found this was true of 62 percent of the people studied. There’s an obvious question here for our culture: If surgery will not solve “Truth4lie’s” psychiatric problems, why are we so certain that surgery is the solution for those suffering with gender dysphoria? After all, a 2011 study of Swedes who had sex reassignment surgery found that “Persons with transsexualism, after sex reassignment, have considerably higher risks for mortality, suicidal behaviour, and psychiatric morbidity than the general population.” Increasingly today, the message is that nothing should keep someone with gender dysphoria from the surgeon’s blade, except maybe hormone treatment, and that includes children. Anyone who suggests otherwise—that those who suffer from gender dysphoria might consider some sort of intervention, maybe even counseling—are quickly accused of “transphobia.” The obvious parallels between incels and those with gender dysphoria, as well as our culture-wide suppression of those obvious parallels, would be funny if the consequences weren’t so tragic. Ideas have consequences. Bad ideas have victims. And the idea that our looks, our so-called “gender identity,” even our psychiatric disorders, define who we are, well, that’s a victim-maker if there ever was one.     Download mp3 audio here.