BreakPoint: Making Abortion Unthinkable
How can we respond to those around us with truth and love? Give today to receive this month's featured resource.
Skip to content 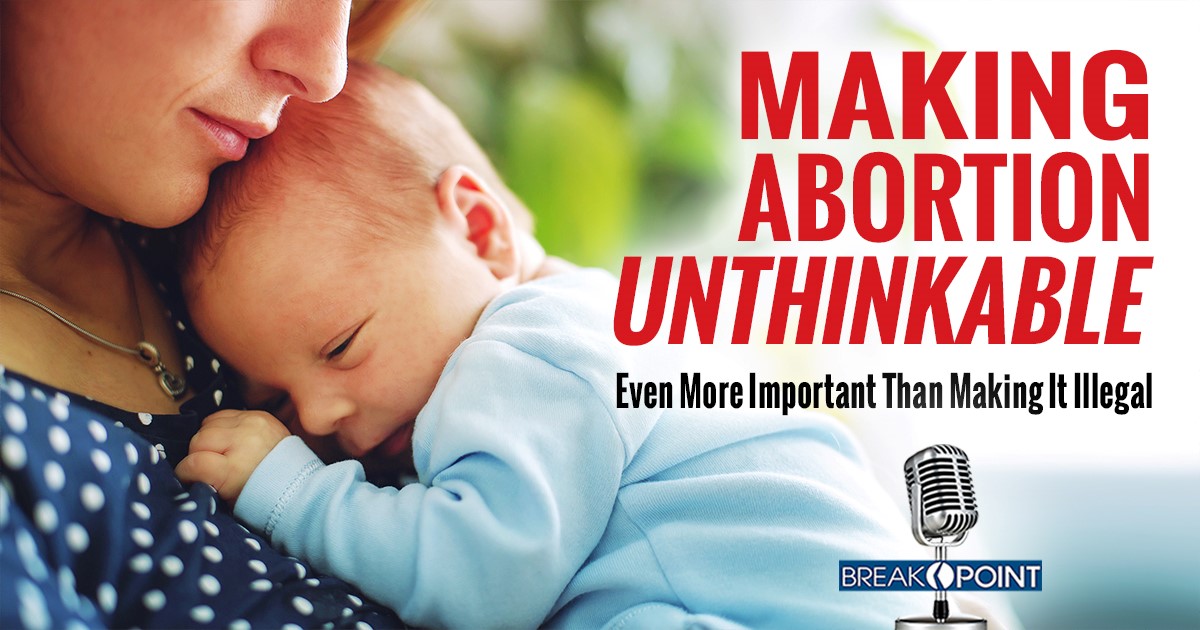 To quote a friend: The goal of the pro-life movement should be to make abortion unthinkable--not just illegal. Let me explain why. Ever since Roe v. Wade, and especially in recent years, pro-lifers are making dramatic legislative gains in restricting abortion. Thank God for that. But we should never lose sight of the fact that the ultimate goal is to change hearts and minds, not just laws. Why this distinction matters was illustrated in a recent op-ed in the New York Times. As you might guess, especially from the title, “What Happens When Abortion is Banned,” the piece was not a ringing endorsement of the pro-life position. Still, the author, law professor Michelle Oberman, made some points we need to hear.  She points to Latin America as a harbinger for what might happen if abortion becomes illegal in parts of the United States. Specifically she cited two countries, El Salvador, where abortion is banned without exception, and Chile, where the same was true until just last year. As Oberman wrote, when she visited Chile in 2008, she “expected to find hospitals overflowing with dying women,” victims of back-alley doctors and self-inflicted abortion attempts. But she found no such thing. The reason was the ready availability of abortifacients, what Oberman called a “revolution that has replaced back alleys with blister packs ordered online.” She continues, “Abortifacient drugs have become so readily available in places like Chile and El Salvador that today it is impossible to enforce abortion bans.” They’re “readily available” because they “cost pennies to make” and the most commonly-used one, misoprostol, is also used to treat stomach ulcers. While misoprostol alone is “less effective” (i.e., less lethal to the unborn child) than the combination used in the United States, when used in the first trimester it induces an abortion ninety-percent of the time. Thus, in Brazil, where abortion is illegal in most instances, these drugs are estimated to result in half a million abortions every year. Oberman’s right about one very important thing: Legally banning abortion is not the same thing as ending it. Which means: if and when—Please God!—Roe v. Wade is overturned, the battle will be far from over. For starters, legally speaking, the issue of abortion most likely will be returned to the states. That’s when the political battle will begin in earnest as states debate whether if and/or under what circumstances abortion will be legal within their boundaries. Some large states, such as California and New York, will probably preserve something akin to the status quo. Others likely will not. But complicating all of this will be the increased use of abortifacients in place of surgery. By some estimates, the number of drug-induced abortions nearly matches the number of surgical abortions in the United States. And that number will likely continue to grow. This means that two of the most potent tools we possess—protesting at abortion clinics and stigmatizing abortionists—will become less relevant as surgery is replaced by a prescription. So the battle to protect unborn human life will not be won, at least primarily, in the courts or legislatures. It will be won, as Chuck Colson used to say, over the backyard fence and at barbecues. Through pregnancy care centers, pro-life student groups, trained conversationalists, good books, and raising our own children to respect life. That is, it will be won when Christians all join in to persuade others that each and every human life, from conception to natural death, is worthy of our protection. Persuade them of this and we're well on the way to making abortion unthinkable, and whatever you can purchase online irrelevant.   Making Abortion Unthinkable: Even More Important than Making It Illegal While the trend in abortion procedures is moving away from surgery and toward prescription drugs, our goal as believers remains the same: persuading our culture that the taking of innocent human life is wrong, no matter how it is done. Join your local pro-life organization in working toward the goal of making abortion unthinkable.