Millennials and Evangelism - Breakpoint
How can we respond to those around us with truth and love? Give today to receive this month's featured resource.
Skip to content 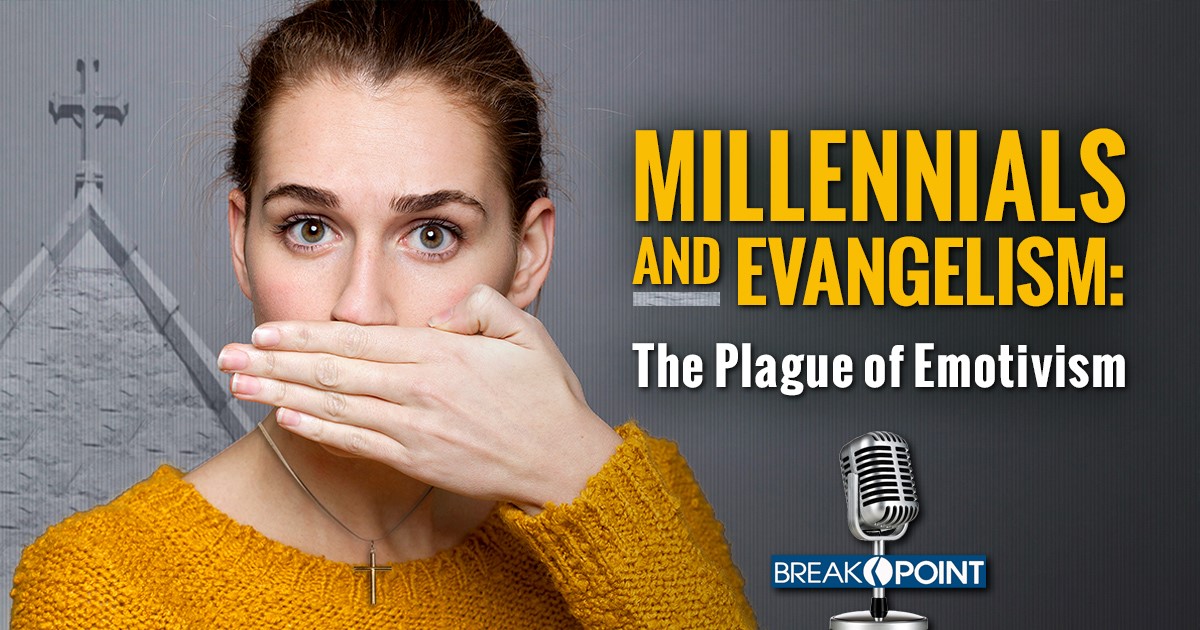 In 1957, the social psychologist Leon Festinger coined the term “cognitive dissonance” to describe the stress that results from holding two or more contradictory beliefs at the same time.

According to Festinger, people will attempt to alleviate the stress by either changing their minds about one of the ideas or, more commonly, convincing themselves the ideas really aren’t contradictory. The latter usually results in an incoherent mess, something a recent Barna report amply demonstrates.

The report, entitled “Reviving Evangelism,” found that virtually every practicing American Christian believes that “part of their faith means being a witness about Jesus.” Similarly, virtually all of them agree that “the best thing that could ever happen to someone is for them to know Jesus.”

This sounds like a solid foundation for “reviving evangelism,” doesn’t it? Yet, the same study found that “nearly half (47 percent) of practicing Christian millennials—churchgoers who consider religion an important part of their lives—believe that evangelism is wrong.”

Specifically, they believe it’s “wrong to share one’s personal beliefs with someone of a different faith in hopes they will one day share the same faith.”

If you’re wondering how one can simultaneously believe that knowing Jesus is the best thing that could happen to a person and that telling that same person about Jesus is somehow wrong, you understand what cognitive dissonance means.

Making matters even more, well, dissonant, is that the same group “is more likely than any other generation to say they are gifted at sharing their faith.” Nearly three quarters of them describe themselves that way.

At this point, it’s tempting to talk about how participation trophies and self-affirmation statements have ruined the millennials. But the problem isn’t our misguided strategies of boosting this generation’s self-esteem. The problem is theological anemia.

Specifically, it’s a failure of catechesis.

Evangelizing like you mean it requires going against the cultural grain. As Barna president David Kinnaman told Christianity Today, “Cultivating deep, steady, resilient Christian conviction is difficult in a world of ‘you do you’ and ‘don’t criticize anyone else’s life choices’ and emotivism, the feelings-first priority that our culture makes a way of life.”

Notre Dame philosopher Alasdair MacIntyre has suggested that emotivism is at the heart of our current post-truth culture, and turns all statements about the good and the true into mere claims of personal preference.

Overall, the church has done a poor job of catechizing both ourselves and future generations against emotivism. In fact, as writer Samuel James argued, “The data here strongly suggests that Christian millennials are being catechized by their colleges, not churches.”

Actually, I would argue that across our culture, emotivism is pushed on us way before college, and too often, it’s even pushed by churches when they talk about “knowing Jesus.”

What is meant by “knowing Jesus” by so many Christians is closer to “I love Swiss Almond Vanilla ice cream” than it is what the Apostles meant by it. It indicates a strong preference, but not a life-altering conviction.

The late biblical scholar Francis Martin used to tell his students “Christianity is a way of knowing, not a warm fuzzy.” By “way of knowing” he meant something akin to what we at the Colson Center mean by “worldview”: the truth about God, creation, and ourselves as ultimately revealed in Jesus Christ.

That’s not to say our faith isn’t personal. Of course it is, but for the New Testament writers, “knowing” God and Jesus Christ whom He sent isn’t about making us feel good. It’s about being rescued from the dominion of darkness for the kingdom of Christ.

When was the last time you heard Christianity described this starkly? If we can’t remember, then we ought not be surprised by the cognitive dissonance described by the Barna report.