How Dare the Vice President Pray? - Breakpoint
How can we respond to those around us with truth and love? Give today to receive this month's featured resource.
Skip to content 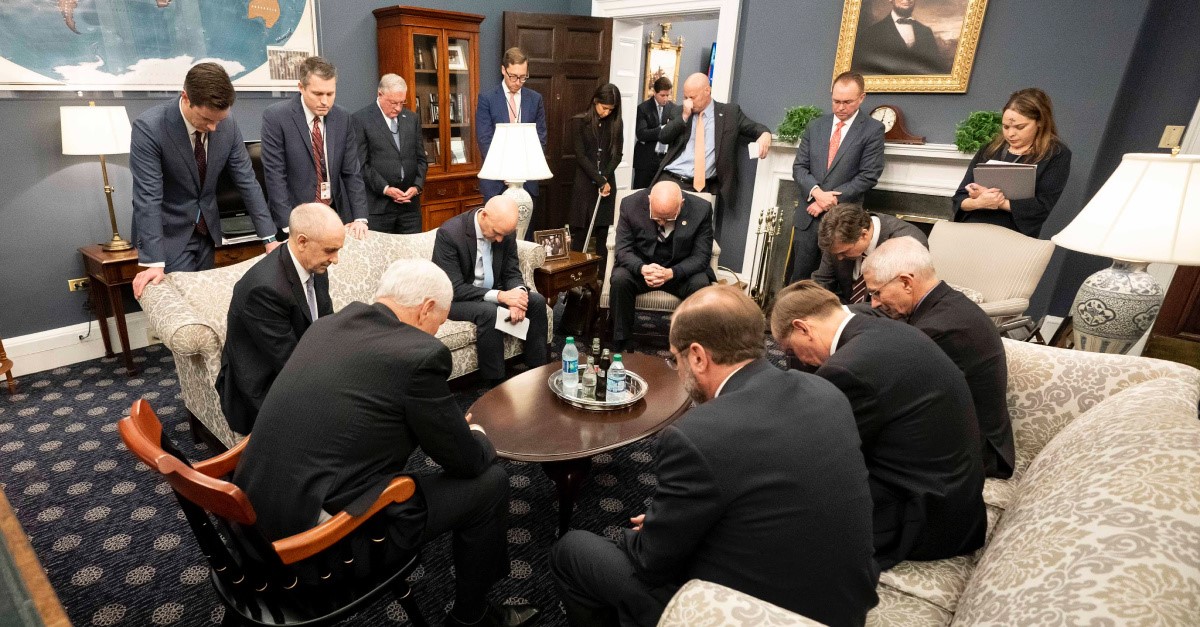 
How Dare the Vice President Pray?

As I argued yesterday on BreakPoint, the spread of the coronavirus is a brutal reminder of just how fragile humans are, a direct and uncomfortable challenge to our collective illusion of control. As it spreads, not only are individual lives threatened, but also the intricate and fragile web of global connections that fuel national and international economies. To ask God’s help in all of this shouldn’t be controversial at all.

That’s exactly what Vice-President Mike Pence decided to do. An official White House photo from February 26 captured the Vice-President and the Coronavirus Task Force opening their meeting with heads bowed in prayer. The photo, as they say nowadays, blew up the Internet, unleashing a tidal wave of “prayer shaming,” a term coined a couple of years ago to describe ridiculing people who dare offer their “thoughts and prayers” for the victims of tragedies like mass shootings.

One secular research website headlined the photo with this take: “Symbolic of the moral and intellectual decay at the White House, a photo shows Vice President Mike Pence and his team trying to pray away the coronavirus.” Pence and his team were “wallowing in ignorant superstition and willful ignorance,” the site continued, suggesting that Pence prays because he’s a “religious extremist.”

Another slant, this one from an out-and-proud atheist: “It’s not a joke when people say these Republicans are trying to stop a virus with prayer. What else did anyone expect? Science? Reason? Something sensible?”

One of the most viral tweets of the photo had this caption: “Mike Pence and his coronavirus emergency team praying for a solution. We are so [blanked].”

Never mind that every session of Congress begins with a prayer, as do thousands of public meetings across the country every day. Prayer is, for many today, politically unacceptable, seen as an affront to science, an obstacle to governance, and worst of all, a shameful admission that we are not in control of our own destinies.

Of course, that’s precisely the point of prayer. We are not in control. We think we are. We’ve made remarkable medical, scientific, and technological breakthroughs that have allowed us be less the victims of nature than societies in the past, but we do not control the world. The idea that we do, ironically, reveals the central belief of a technocratic worldview, one every bit as much an article of faith as any held by those who pray.

This faith lies in something quite unprovable and tentative, namely, that all human problems and challenges, whether climate change or gun violence or the coronavirus, are problems that can be solved if only we apply the right techniques, which these days are almost always political steps: i.e., passing the right laws or public policies.

In this worldview, the world and all of its complexities are reduced to mathematical models and can thus be controlled by our best ideas and efforts. All of our problems, the logic continues, can be, if not eliminated, at least ameliorated. In fact, this worldview’s central article of faith explains why those committed to it think of prayer and science as mutually exclusive options, something that directly contradicts the history of both science and many of history’s most important scientists.

This secular faith, along with the political illusions it fosters, is on full display right now by those claiming this outbreak is something President Trump or some government entity should be able to save us from. Such an inflated idea of government not only reduces the room for God in our cultural imagination, it dramatically expands the room for the state in our cultural imagination. That’s something we’ll surely regret.

In the end, placing the world on our own shoulders in this way will not grant us any more control. Instead, we’ll only find its weight too heavy, and then where will we turn?

As the Psalmist said, nations may rage and people may plot in vain, but only the Lord “makes us dwell in safety.” Thank God when our leaders recognize this, and may we all join in praying for the Coronavirus Task Force, and for those political leaders and health officials around the world, for God-ordained wisdom to fight this potential pandemic.

The Coronavirus, God, and a World out of Our Control

Coronavirus Will Test Our New Way of Life